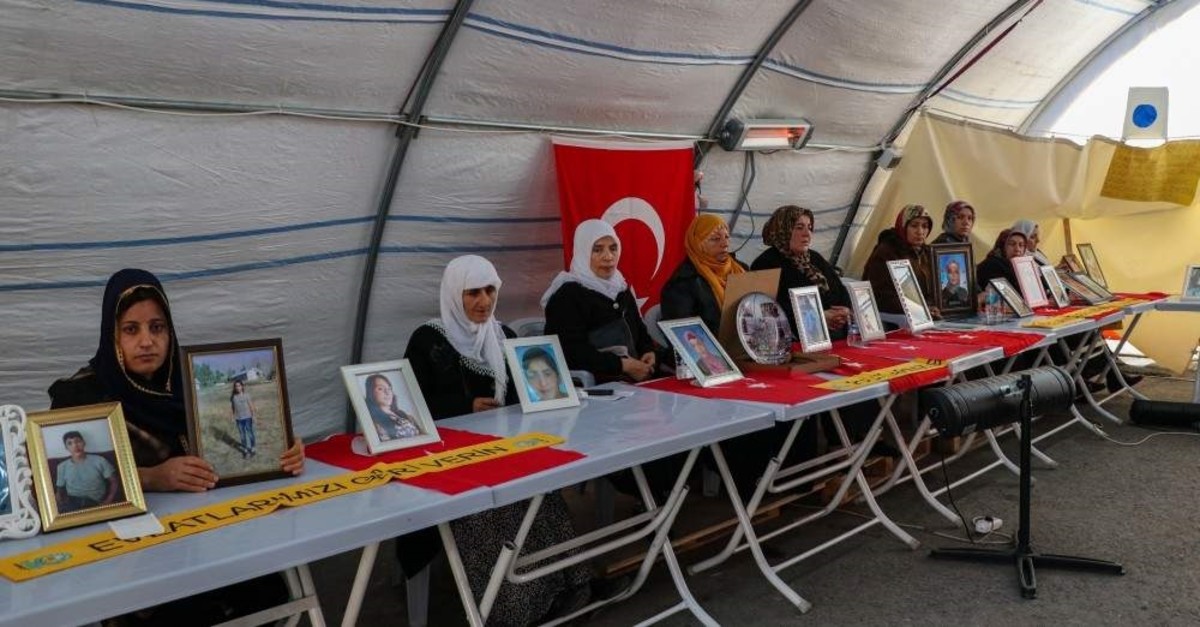 Another family has joined the sit-in protest in front of the pro-PKK Peoples' Democratic Party (HDP) headquarters in the southeastern Diyarbakır province on the 133rd day as they demand the return of their children from the terrorists who abducted them.
Today, another family joined the protest, increasing the total number of families to 65. A father coming from Bingöl province – Metin Açan – has joined the sit-in for his two sons that were abducted to the mountains. Açan is determined to rejoin his 18-year old son Hakan abducted eight years ago and 24-year old Harun, abducted four years ago.
The protest started when Hacire Akar turned up at the doorstep of the HDP's Diyarbakır office one night. A week later, on Sept. 3, 2019, families inspired by Akar transformed her solo stance into a collective sit-in protest. Akar's son Mehmet returned home on Aug. 24, giving hope to other families.
Esmer Koç, another mother with the same aim, came for her daughter abducted in Hakkari province seven years ago.
“My daughter, if you can hear me, see me – run away, surrender to our state. I came here for my daughter, I will not leave without her,” Koç stated.
Since the beginning of their protest, the mothers have received support from across the country with almost all segments of society expressing solidarity with their cause.
Yasin Kaya, a father with the hope of finding his 21-year old daughter Çiğdem, who was abducted in 2014 in Ağrı province, has been attending the protest since October. Kaya advised his daughter to surrender to security forces, saying: “Look, four families have found their children. They are now in their warm houses. You come, too."
The HDP is accused by the government of having links to the PKK and accused by the protesting mothers of kidnapping or tricking their children to join the terror group. The HDP, long facing public reaction and judicial probes over its ties to the PKK, is under pressure due to this growing civilian protest movement. Various groups from around Turkey have supported the Kurdish mothers in their cause, with many paying visits to show their support.
According to a statement by the Turkish Interior Ministry on Nov. 26, the dissolution of the PKK has recently accelerated thanks to successfully conducted counterterrorism operations and strategies in Turkey and abroad.
Saying that some families feel the joy of rejoining their children, Koç added, “I hope our children return as well. We were happy as if our own children came. I hope this day will come for us.”
Last week, another five PKK members surrendered to security forces in Şırnak, one of whom was the grandson of a grandmother attending the sit-in. The grandmother, Halime Kadran, and the aunt of the abducted child, G.A., reunited with İbrahim Halil Kadran, marking the fourth family that has seen the result of their unyielding protest against the HDP.
The Interior Ministry’s statement said significant numbers of terrorists have started fleeing the PKK and surrendering. More than 235 terrorists have surrendered to Turkish security forces in 2019.