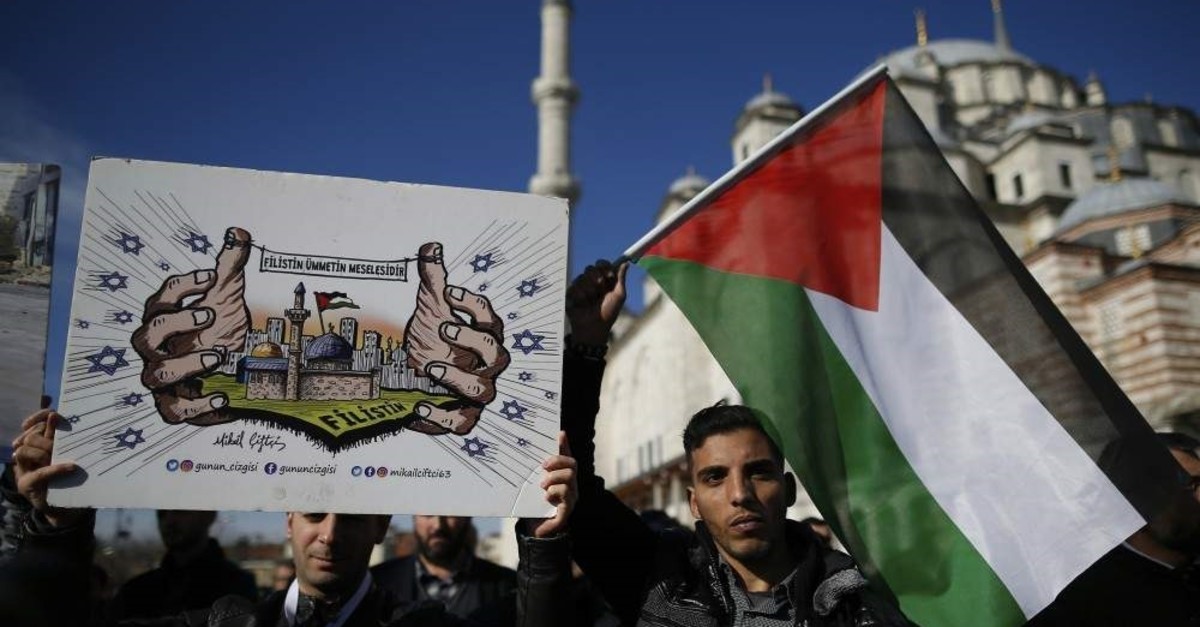 At the top was the reaction to Donald Trump's so-called peace plan for the Israeli-Palestinian conflict, labeled the "Deal of the century" by Washington. Erdoğan stressed that Jerusalem is a red line for Turkey and the Muslim world. He said the plan is part of efforts to legitimize the Israeli invasion of Palestinian territories and neglect the rights of Palestinian people. Ankara will call on member states of the Organization of Islamic Cooperation (OIC) to show unanimously oppose the plan during this week's meeting in Jeddah. It would be correct to say that Turkey's 82 million population is in full consensus regarding the issue because Turkey is one of the countries that has shown the strongest reactions to Israel's unlawful acts. Not only its ruling Justice and Development Party (AK Party) but also the opposition parties, nongovernmental organizations and media institutions have all voiced their opposition.

The Idlib issue holds second place in Turkey's red lines. On his way back from the Africa visit, Erdoğan told journalists that preventing a new conflict and a new wave of mass migration from northwestern Syria's Idlib is crucial for Ankara.

The president added that Russia has not abided by the Sochi and Astana deals and signaled that Turkey may continue Operation Peace Spring if bombardments of civilian areas in Idlib do not stop.

Following his statement, sources on the ground confirmed the mobilization of Turkey-backed Syrian National Army (SNA) and new deployments by the Turkish army to the border areas. Due to its humanitarian and security concerns in Idlib, Ankara expects a positive step from Moscow on the issue. Despite the Bashar Assad regime, Russia and some other explicit and implicit actors on the ground dragging their feet to a political solution, Turkey still sees a military solution as the last resort.

In Turkey's list of red lines, supporting Libya's U.N.-recognized Government of National Accord (GNA) led by Fayez al-Sarraj and preventing a fait accompli by illegal actors, such as warlord Khalifa Haftar, over Libyan people comes in third place.

Erdoğan emphasized Ankara's determination on the issue to German Chancellor Angela Merkel during her recent visit to Turkey. Ankara also took a joint initiative with Russia, which is represented in Libya by mercenaries of the Wagner Group and is closely watching developments on the ground. With these interlocutors, along with the U.N., Ankara continues to support a political solution.

On the other hand, the degree of Turkey's reaction against the Israeli media's targeting of the head of Turkey's National Intelligence Agency (MİT), Hakan Fidan, shows the significance of the issue for Ankara. Israel and its supporters should pay attention to these reactions, which is stated by all political fractions. While Erdoğan said the news that the Israeli media are targeting the spy chief proves that Turkey is on the right track, the opposition parties also said it was unacceptable to threaten a public servant in such a way.

Turkey will likely reiterate its calls for a political solution in Syria and Libya in the upcoming weeks. On the other hand, its patience is running out against actors on the ground who are still seeking to take a result with an armed conflict. Turkey's red lines and to-do list have become clearer than ever.