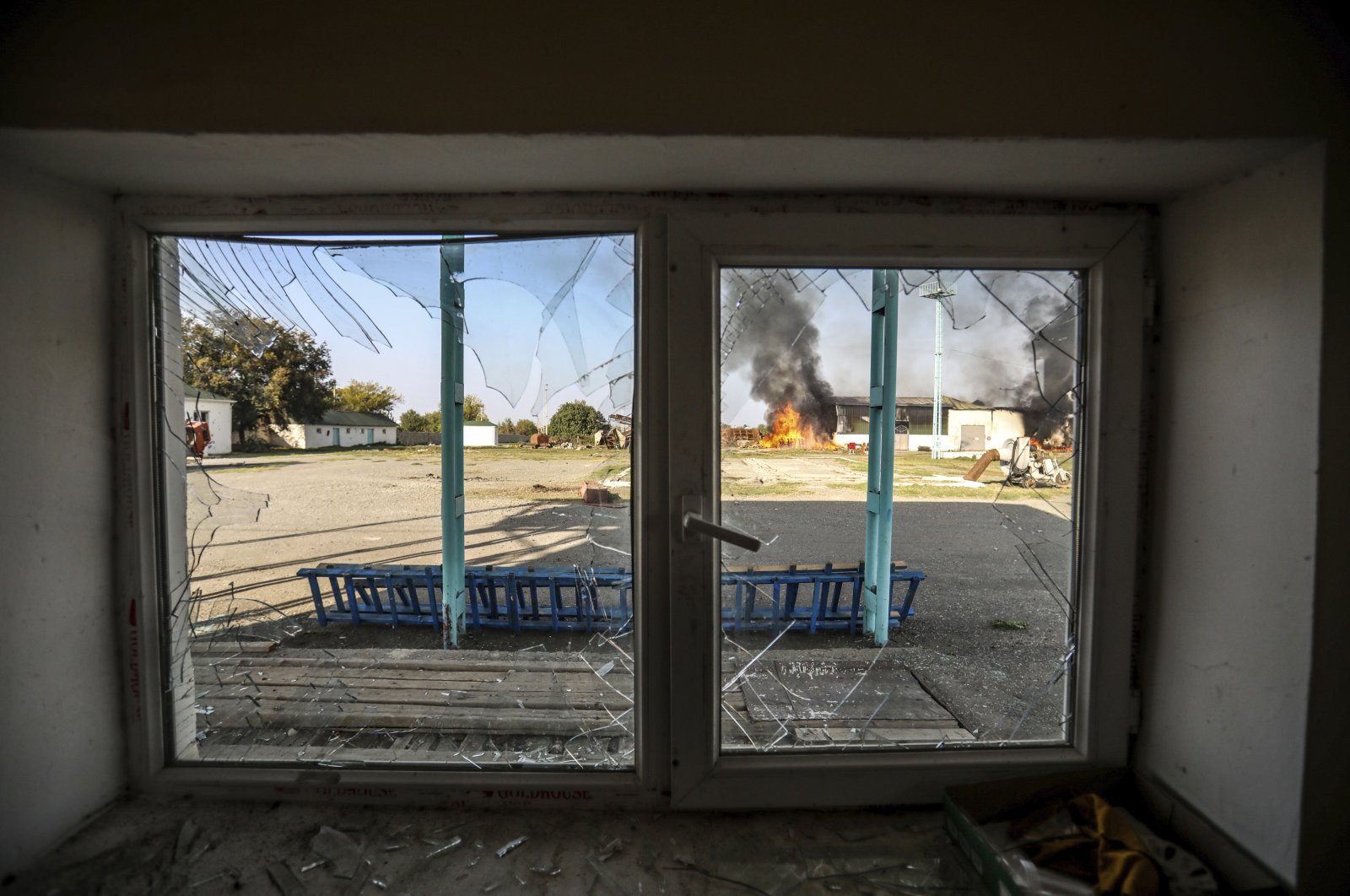 Seen through a damaged window, a fire burns at a factory following its shelling during fighting over the occupied Nagorno-Karabakh region, Tartar, Azerbaijan, Oct. 19, 2020. (AP Photo)
by Agencies
Oct 24, 2020 2:49 pm

Armenian forces fired missiles and artillery shells towards the areas of Goranboy and Tartar, according to Azerbaijan's Chief Prosecutor's Office.

A 16-year-old Azerbaijani boy identified as Orhan Ismayilzade died when an Armenian missile struck his house, the authority said in a statement.

The other victim was Artur Mayakov, a 13-year-old Russian citizen. He was injured in the Oct. 17 Armenian missile attack on the city of Ganja and succumbed to his injuries at the hospital, said Hikmet Hajiyev, assistant to Azerbaijan's President Ilham Aliyev.

Meanwhile, clashes between Azerbaijan and Armenia over occupied Nagorno-Karabakh continued Saturday hours after the United States hosted top diplomats from Baku and Yerevan for talks on settling their decadeslong conflict.

Nagorno-Karabakh is an Azerbaijani territory that has been under the control of Armenian forces since a war there ended in 1994. The current fighting that started Sept. 27 marks the worst escalation in the conflict since the war’s end.

After two failed attempts by Russia to broker a truce, the U.S. waded onto the scene on Friday, with Secretary of State Mike Pompeo hosting the Armenian and Azerbaijani foreign ministers for separate talks.

“Both must implement a cease-fire and return to substantive negotiations,” Pompeo said in a tweet after the negotiations.

Russian President Vladimir Putin said Thursday that according to Moscow’s information, the death toll from the fighting was significantly higher than officially reported by the warring parties, nearing 5,000.

Russia, the U.S. and France have co-chaired the Minsk Group set up by the Organization for Security and Cooperation in Europe to mediate in the conflict, but they haven't made any progress after nearly three decades.

Aliyev has said that to end hostilities, Armenian forces must withdraw from Nagorno-Karabakh. He has insisted that Azerbaijan has the right to reclaim its territory by force since international mediators have failed.