'Cyprus talks can only happen if 2 states treated equally' 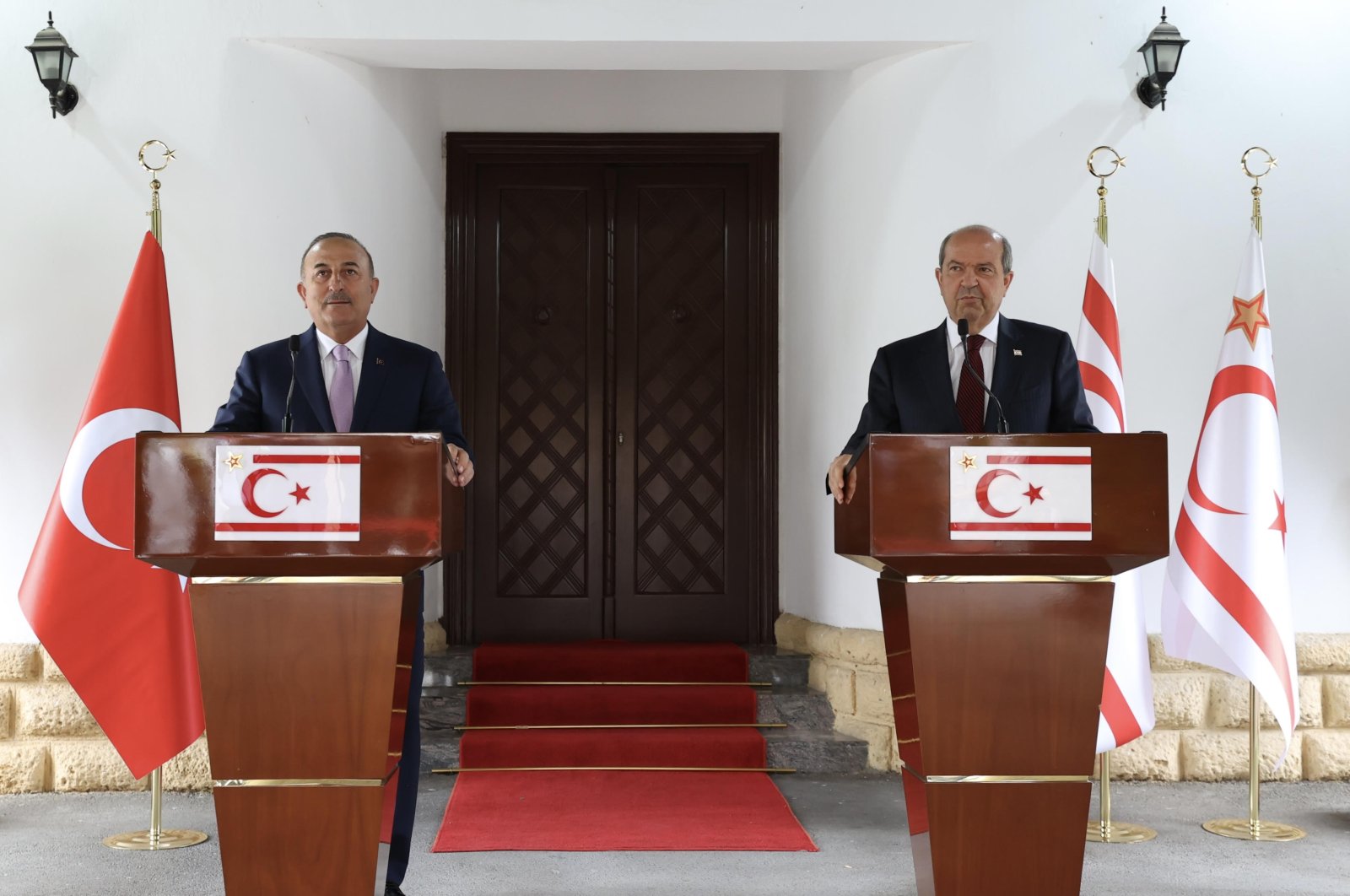 Foreign Minister Mevlüt Çavuşoğlu criticized Greece and the Greek Cypriot administration for trying to spoil the negotiation process, as he reiterated Turkey's determination to protect the rights of Turkish Cypriots

If negotiations ever take place between Turkish and Greek Cypriots, they will take place between two sovereign states rather than two communities, Foreign Minister Mevlüt Çavuşoğlu said, as he criticized the Greek Cypriot administration for trying to “dilute” negotiations on the Cyprus issue by repackaging and selling the issues they brought to the agenda as "confidence-building steps or measures."

Çavuşoğlu, along with Deputy Foreign Minister Sedat Önal and Turkish Republic of Northern Cyprus (TRNC) Interior Minister Ziya Öztürkler met with Turkish Cypriots in the town of Lapta in the coastal city of Girne on Sunday. The next day, the top Turkish diplomat met with his TRNC counterpart Tahsin Ertuğruloğlu and President Ersin Tatar.

In a joint press conference with Tatar, he highlighted that the TRNC will not accept negotiations unless they are treated as a sovereign state.

He also noted that the Greek Cypriot administration aims to take the formerly closed city of Varosha (Maraş) back from the TRNC, as he criticized Greek Prime Minister Kyriakos Mitsotakis for his anti-Turkey remarks in the United States.

“We do not expect the Greek prime minister to praise us at the U.S. Congress, but as two NATO allies, it is a matter of solidarity under the scope of the bloc’s security concerns,” he said, adding that it was unacceptable for Mitsotakis to carry out lobbying activities regarding the F-16s.

During his visit to Washington last month, Mitsotakis warned a joint session of Congress against supporting the Biden administration’s proposed military sales to Turkey, claiming such a move could create additional instability in the region.

Meanwhile, Çavuşoğlu said Turkish Cypriots are "precious" to Turkey and it has never left them and the TRNC alone and will never do so.

Emphasizing that he had fruitful meetings with representatives of nongovernmental organizations (NGOs) as part of their visit to the TRNC, Çavuşoğlu added that he will meet with his Turkish Cypriot counterpart Ertuğruloğlu, TRNC President Tatar and the negotiation committee to evaluate the latest developments in Cyprus.

"Ahead of Crans Montana, we said 'we are negotiating for the federation for the last time. After that, there is sovereign equality, not political equality. So, the two-state solution," Çavuşoğlu underlined.

The initiative in Crans-Montana, Switzerland in July 2017 under the auspices of guarantor countries Turkey, Greece and the United Kingdom ended in failure.

"Two states that will live side by side can cooperate with each other in any way. This is quite natural. We are working to make everyone accept the sovereignty of the Turkish Cypriots," he added.

Noting that Turkey proposed the 5+1 Cyprus talks held in Geneva last year, Çavuşoğlu said they also clearly expressed their stance on a two-state solution in these talks.

In his meeting with Ertuğruloğlu, Çavuşoğlu said Turkey strives to find solutions to ongoing global crises, including the war in Ukraine and the food crisis, through diplomatic initiatives. He continued by saying that despite the busy schedule, Ankara always prioritizes the TRNC and Turkish Cypriots.

Noting that Turkey has a clear stance regarding the negotiations, Çavuşoğlu said he has highlighted Ankara and TRNC’s position in his meeting with U.N. Secretary-General Antonio Guterres.

“It is about time that we restart negotiation talks between two sovereign and equal states,” Çavuşoğlu said, adding that Turkey strives to make the voice of Turkish Cyprus heard on international platforms.

The top Turkish diplomat also said the Greek Cypriots and Greece spread propaganda claiming that the Cyprus issue started in 1974, contrary to the fact that it started in 1955 and grew through the 60s and 70s.

​​​​​​​The island has seen an on-and-off peace process in recent years, including a failed 2017 initiative in Switzerland.

The Greek Cypriot administration entered the European Union in 2004, the same year that Greek Cypriots thwarted the U.N.'s Annan plan to end the decadeslong dispute that had envisaged a reunited Cyprus joining the EU.

The status of the island remains unresolved, in spite of a series of negotiations over the years.