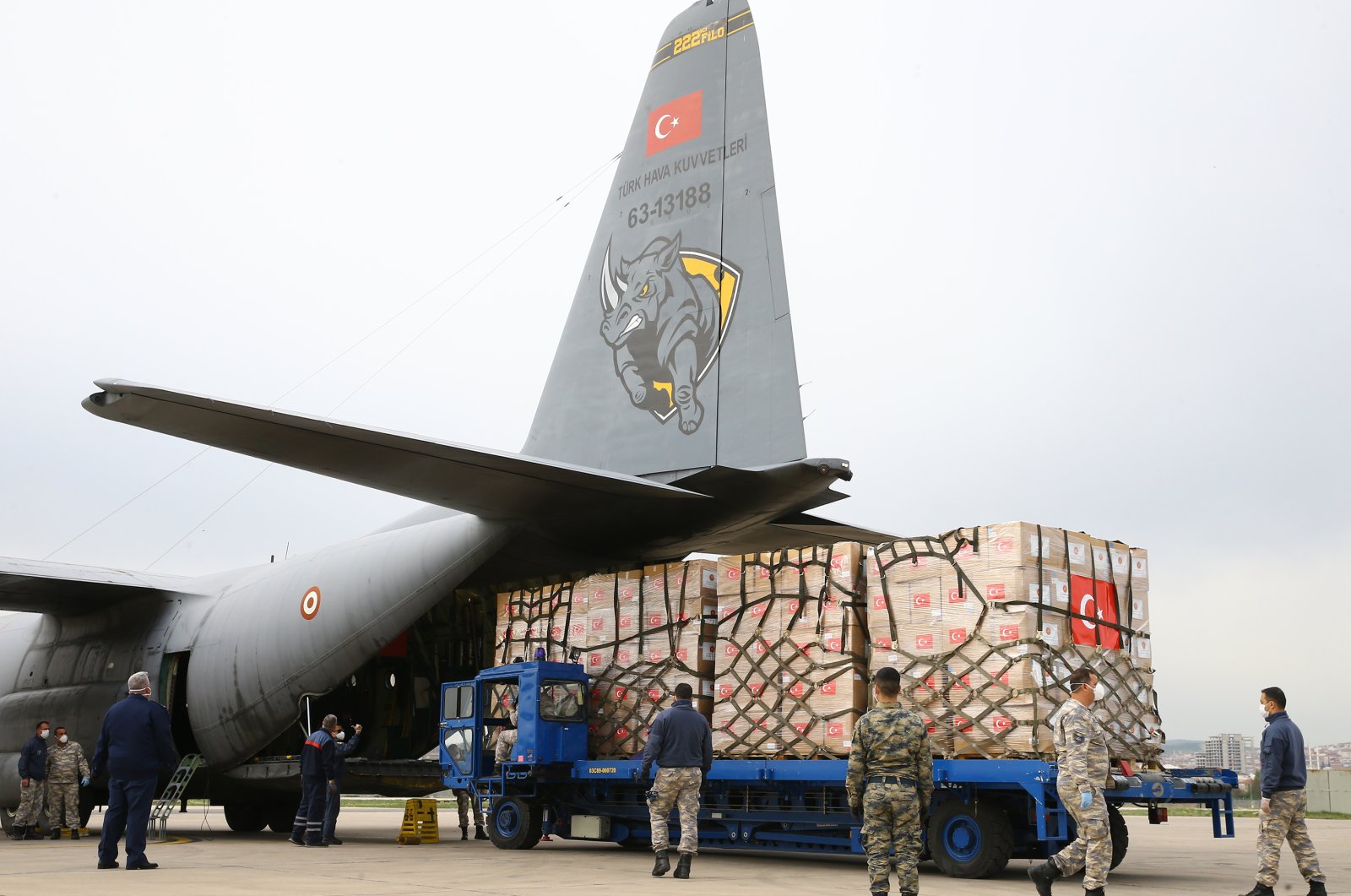 A second Turkish military plane took off from an air base near Ankara on Thursday carrying more medical aid to the U.S. which has been hit hard by the pandemic, April 30, 2020. (AA)
by DAILY SABAH WITH AGENCIES
May 01, 2020 11:43 am

As efforts to tackle the coronavirus outbreak are ongoing around the globe, Turkey is determined to continue providing medical aid to as many countries as it can. The help has been welcomed by those governments' authorities, who have expressed appreciation for the crucial support.

The U.S. thanked Turkey for the medical aid it sent to combat that country's coronavirus outbreak, which has already claimed at least 63,000 lives, Turkey's health minister said late Thursday.

"We spoke on the phone today with U.S. Health and Human Services Secretary Alex Azar. He thanked us for the help of medical supplies sent to the U.S. on the instructions of our President (Recep Tayyip Erdoğan)," Health Minister Fahrettin Koca said on Twitter.

Koca said he explained in detail to his U.S. colleague the treatment methods Turkey had developed as part of measures taken to slow the pandemic in the country.

A second Turkish military plane took off from an air base near Ankara on Thursday carrying more medical aid to the U.S. which has been hit hard by the pandemic.

The cargo plane is carrying the second batch of personal protective equipment, including masks, hazmat suits and disinfectants, the Defense Ministry said.

The items dispatched Thursday were sent in boxes featuring the words of 13th century Islamic scholar Mevlana Jalaluddin Rumi, from Konya in present-day Turkey, in Turkish and English: “After hopelessness, there is so much hope and after darkness, there is the much brighter sun.”

Turkey’s deputy foreign minister, Selim Yavuz Kıran, and the U.S. ambassador to Turkey, David Satterfield, were at the military air base to see the plane off.

“We stand fully with our strategic partner,” Kıran later tweeted.

Receiving aid requests from more than 100 countries, Ankara has provided assistance to all corners of the globe, from Somalia to Italy.

So far, Turkey has sent medical aid to at least 57 countries, including those badly hit by the virus such as the U.K., Spain, and Italy.

The first aid kits were delivered to China on Jan. 31, with protective overalls, 93,500 medical masks, 500 medical protective glasses and 10,000 unsterilized pieces of equipment.

Since first appearing in Wuhan, China last December, the coronavirus has spread to at least 187 countries and regions, with the U.S. and Europe the hardest-hit areas.

More than 3.26 million cases have been reported worldwide, with the death toll surpassing 233,000 and more than 1 million recoveries, according to data compiled by U.S.-based Johns Hopkins University.

Palestine became yet another country to express gratitude toward Turkey for its aid, stating that it fulfilled the utmost need.

Medical aid from Turkey came at a time when the government needed it the most, Palestinian Authority's deputy foreign minister said Thursday.

"This help meets the needs of Palestine in a critical period when the Palestinian budget is inadequate and the economy is negatively affected by the coronavirus outbreak," Deputy Foreign Minister Ahmad ed-Dijk told Anadolu Agency (AA).

A medical cargo plane sent to Palestine is expected to land Thursday at Ben Gurion Airport in Tel Aviv.

Palestine recorded 507 COVID-19 cases, including in the occupied territories, with two deaths, according to officials.

In a statement, the office said Kurti received Turkish Ambassador to Kosovo Çağrı Sakar, and they discussed the latest developments in the fight against COVID-19.

During the meeting, Kurti thanked Turkey for supporting Kosovo in its fight against the outbreak.

Aid deliveries to many spots continue

"This is a gesture of the Turkish government to South Africa. The consignment has been prepared upon the instruction of Turkish President Recep Tayyip Erdoğan," Turkish Ambassador Elif Çomoğlu Ülgen told AA.

She said the consignment was comprised of medical equipment and personal protection gear including surgical masks, medical-grade N95 masks and protective suits.

Other items included face shields, medical safety goggles, hand sanitizers and a disinfection tunnel made specifically for the country.
Ülgen noted that in a personal letter to his South African counterpart Cyril Ramaphosa, Erdoğan saluted South Africa's "effective measures" to curb and deal with the pandemic.

She said Erdoğan also expressed his solidarity with South Africa and offered condolences to the families of those who had died from the virus.

South Africa is one of the most affected countries in Africa by the COVID-19 pandemic, with 5,350 confirmed cases and 103 deaths confirmed so far.

In his letter, Erdoğan expressed concern about predictions indicating that the pandemic could have a more profound impact in Africa.

"In the face of this situation, Turkey will always stand by Africa in the determined fight against the pandemic in terms of experience sharing and medical supplies," he said.

Erdoğan added that the effective measures South Africa has taken since the beginning of the pandemic would contribute to overcoming the crisis with the least possible loss.

"I wish every success firstly to the (South African) health care personnel and to all those who are exerting tremendous efforts to get over this challenging period, and I hope the medical supplies we dispatch today will support your efforts in your fight against the pandemic," he said.

Ülgen also praised South Africa for doing its best to combat COVID-19, saying it implemented some of the fastest and most effective measures in the world to combat the virus.

In a spirit of solidarity and cooperation, Turkey has become the third-largest supplier of medical aid in the world and was already the world's biggest provider of humanitarian aid, she said.

Turkey is also facilitating the supply of medical aid to northwestern Syria to cope with a potential outbreak of the coronavirus, U.N. Emergency Relief Coordinator Mark Lowcock told the Security Council on Wednesday.

Lowcock said the need to prepare for the potential arrival of the coronavirus pandemic in the region makes efforts to scale up all the more urgent, adding items such as hygiene kits and tents for isolation units are being prioritized for cross-border transshipment.

"Turkey is facilitating this scale-up, notwithstanding its own battle with the virus," he said.

"Humanitarian organizations have put in place strict measures to comply with Turkish regulations and to minimize risks of transmission of the virus at transshipment hubs or in other ways," he added.

In his briefing to the world body, he said cross-border aid to relieve the humanitarian situation in the northwest is operating at "record levels."

In March, 1,486 trucks crossed the border from Turkey under the U.N. program. In April, more than 1,100 trucks were dispatched, said Lowcock.

Turkey has a long tradition of sending humanitarian aid to countries facing difficulties, even for those it has tense diplomatic relations with. For instance, back in 1938, only a decade after the country’s foundation following a bloody war, Turkey sent medicine to China amid the outbreak of cholera in East Asia. Similarly, in 1941, Turkey sent medicine to the Greek army following requests from Greece, a country that fought against Turkey during the Turkish War of Independence. Similar aid has been provided to many other countries over the years, including Etiopia, Bangladesh and Afghanistan.