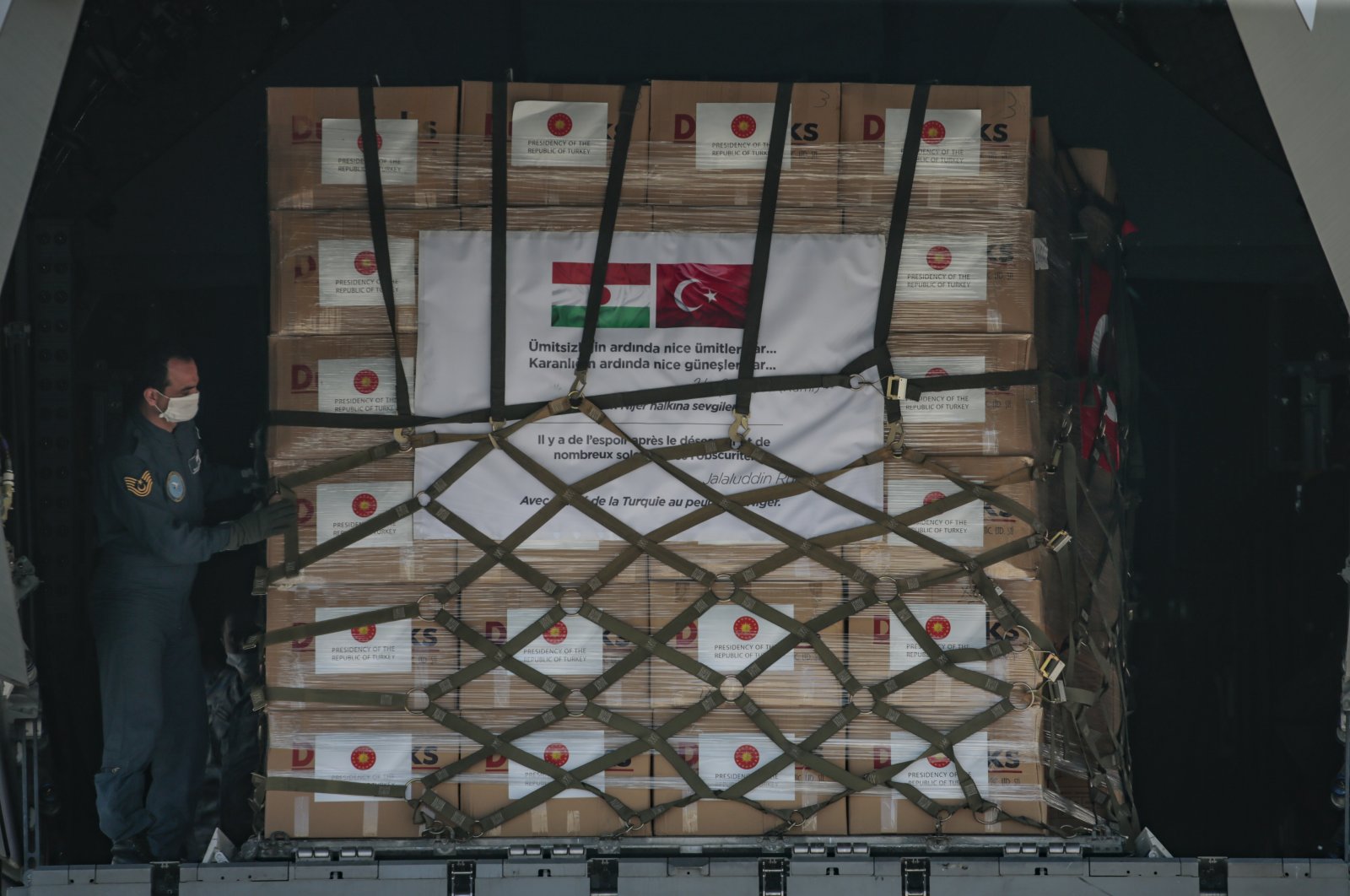 Turkey on Thursday sent medical supplies to Niger to help in the country's fight against the coronavirus outbreak.

A Turkish military cargo plane carrying medical equipment, including protective masks, safety goggles and overalls, departed for the West African country early in the morning. The aid was sent on the instructions of President Recep Tayyip Erdoğan, with each box inscribed with a message for the people of Niger.

"There is hope after despair and many suns after darkness," it said, quoting the words of 13th-century Sufi mystic Mevlana Jalaladdin Rumi.

Earlier this week Turkish Foreign Minister Mevlüt Çavuşoğlu and his Nigerien counterpart Kalla Ankourao discussed the pandemic over the phone.

Turkey has sent medical aid to more than 80 countries as part of its contribution to the global solidarity efforts against the coronavirus pandemic, while two-thirds of countries, or close to 70%, have requested assistance from Turkey.

Having made a name for itself in humanitarian aid over the last decade, Turkey has been a leader in the global fight against the COVID-19 pandemic, sending medical aid to various locations around the globe every other day.

Ankara's aid packages mostly include medical masks, protective overalls and gloves, as well as disinfectants. All equipment was produced at military-owned factories and at sewing workshops that usually produce military uniforms and other clothing for the army.

Turkey has a long tradition of sending humanitarian aid to countries facing difficulties, even to those with whom it has tense diplomatic relations. For instance, in 1938, only a decade after the country's foundation following a bloody war, Turkey sent medicine to China amid a cholera outbreak in the Far East. Similarly, in 1941, Turkey sent medicine to the Greek army upon the request of Greece, a country that had fought against Turkey during the latter's War of Independence. Similar aid has been provided to many other countries over the years, including Ethiopia, Bangladesh and Afghanistan.

Niger has a population of over 22 million and has recorded 961 COVID-19 cases so far, including 65 deaths and 857 recoveries, according to figures compiled by the Johns Hopkins University.

In May, the government lifted a curfew imposed in the capital Niamey since March and reopened all places of worship in the country.

Worldwide the coronavirus pandemic has killed more than 386,000 people, with total infections in 188 countries and regions reaching over 6.51 million, while close to 2.81 million people have recovered.