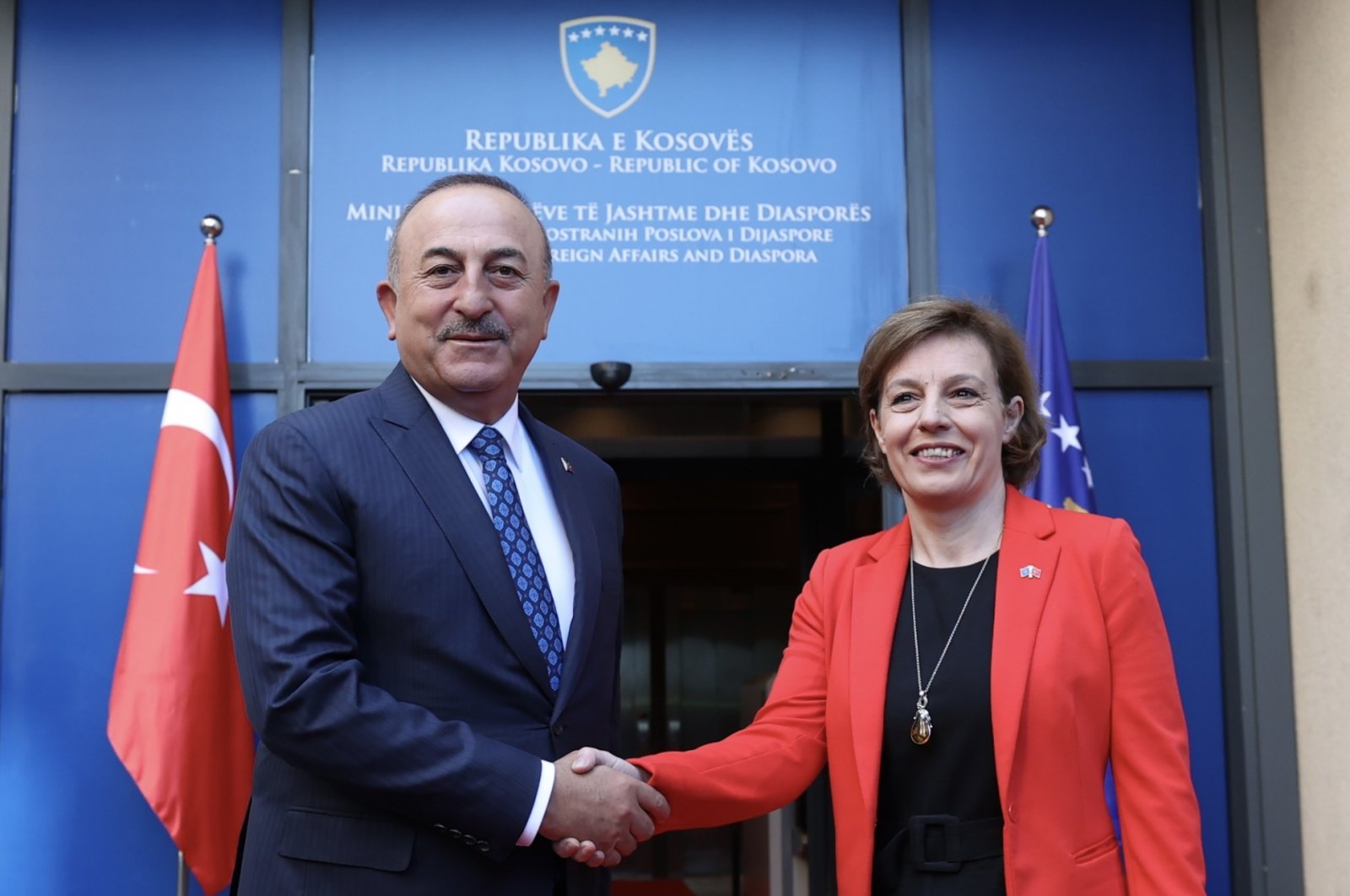 Turkey will not allow the Balkan region to turn back to the dark days of the 90s, Foreign Minister Mevlüt Çavuşoğlu said on Sunday, underlining Ankara’s support for the stability of Kosovo as well as that of the region.

During a press conference with Kosovo’s Foreign Minister Donika Gervalla-Schwarz in Pristina, Çavuşoğlu said: “As Turkey, we have frequently voiced that we will not allow the region to return to the dark days of the 90s. For this purpose, we are engaging in all kinds of work. As a country that is on good terms with and has a dialogue with all the region’s countries, we will continue our efforts in this regard. Therefore dialogue is vital for the region’s permanent peace and stability.

“We started in Belgrade, we gave the same messages there. We support the ongoing Belgrade-Pristina dialogue process, that means, the dialogue between Kosovo and Serbia. We believe that an agreement must be struck through diplomacy. We see that tensions are rising in the region.”

“We discussed what we can do to further increase our bilateral relations,” he added.

“Today we also had the chance to reiterate once again our support for the sovereignty, territorial integrity and political unity of Kosovo. We care about the strengthening of Kosovo’s state institutions, its regional and international integration,” Çavuşoğlu said, emphasizing that Ankara also supports the membership of Kosovo in European-Atlantic institutions.

Kosovo declared independence from Serbia in 2008. The United States and most of the West recognize the declaration, but Serbia does not and continues to lay claim to the territory. Ethnic Serbs are Kosovo's biggest minority group and are entitled to having 10 representatives serving as lawmakers in the country's 120-seat parliament, as well as in governmental posts.

Kosovo has always stood by Turkey in challenging times, Gervalla-Schwarz said for her part, indicating also that similarly, Ankara has extended support to problems in the Balkan region.

The two top diplomats during their meeting discussed relations and regional developments while signing a memorandum of understanding on civil aviation aimed at increasing tourism and trade.

He added that in order to further increase the bilateral trade volume, the Joint Economic Commission meeting has to be conducted as soon as possible, while business people need to come together routinely.

Çavuşoğlu, on the other hand, also spoke on the presence of the Gülenist Terror Group (FETÖ) in the country.

“We can say that this is the only challenge in our relations, otherwise we have no problems. Because this FETÖ presence continues to make all kinds of negative efforts to poison our relations. The presence of FETÖ, which has engaged in a coup attempt in Turkey, is saddening us and the Turkish people deeply,” Çavuşoğlu underlined, saying that the terrorist group uses similar strategies it had applied in Turkey now in Kosovo.

“On the one hand, they continue to poison the youth, on the other hand, they increase their investments in the media. On the other side, efforts to infiltrate state institutions continue in the same way,” he explained.

FETÖ – led by Fetullah Gülen, who currently lives in the U.S. and is implicated in a long list of trials against the terrorist group – orchestrated the coup attempt with the aid of its military infiltrators and civilian members of the group who were in charge of those infiltrators.

Bosnia Herzegovina plays a key role in the region's stability, and Turkey will not allow a new conflict to occur, Çavuşoğlu said a day earlier during a joint news conference with his Bosnian counterpart Bisera Turkovic in the capital Sarajevo as part of his Balkans tour in the region which included Serbia, North Macedonia, Croatia, Bosnia-Herzegovina and Kosovo.

"During our contacts in Belgrade, we saw that Serbian authorities are also ready for this summit, as well as Mr. (Serbian President Aleksandar) Vucic," he said.

Çavuşoğlu on Thursday met with his Serbian counterpart Nikola Selakovic in Belgrade.

They exchanged views on the situation in Bosnia-Herzegovina, as well as the dialogue between Belgrade and Pristina.

"We will continue to strongly support the sovereignty, territorial integrity and stability of Bosnia and Herzegovina, as we have done so far.

"We will continue to pursue our efforts for the stability and development of Bosnia and Herzegovina in an inclusive way. We think that these efforts will contribute positively to the welfare of all countries in the region," he noted.

Turkovic, for her part, said Çavuşoğlu’s visit comes at an important moment for Bosnia and the visit is an indication of the continuity of relations based on mutual respect.

Bosnia-Herzegovina is currently embroiled in a political conflict between Bosniaks and Serbs living in the country.

The dispute erupted after Valentin Inzko, then-high representative, amended the criminal code in July to ban the denial of genocide and the glorification of war criminals.

Bosnian Serb lawmakers in response said they would boycott the country's institutions.