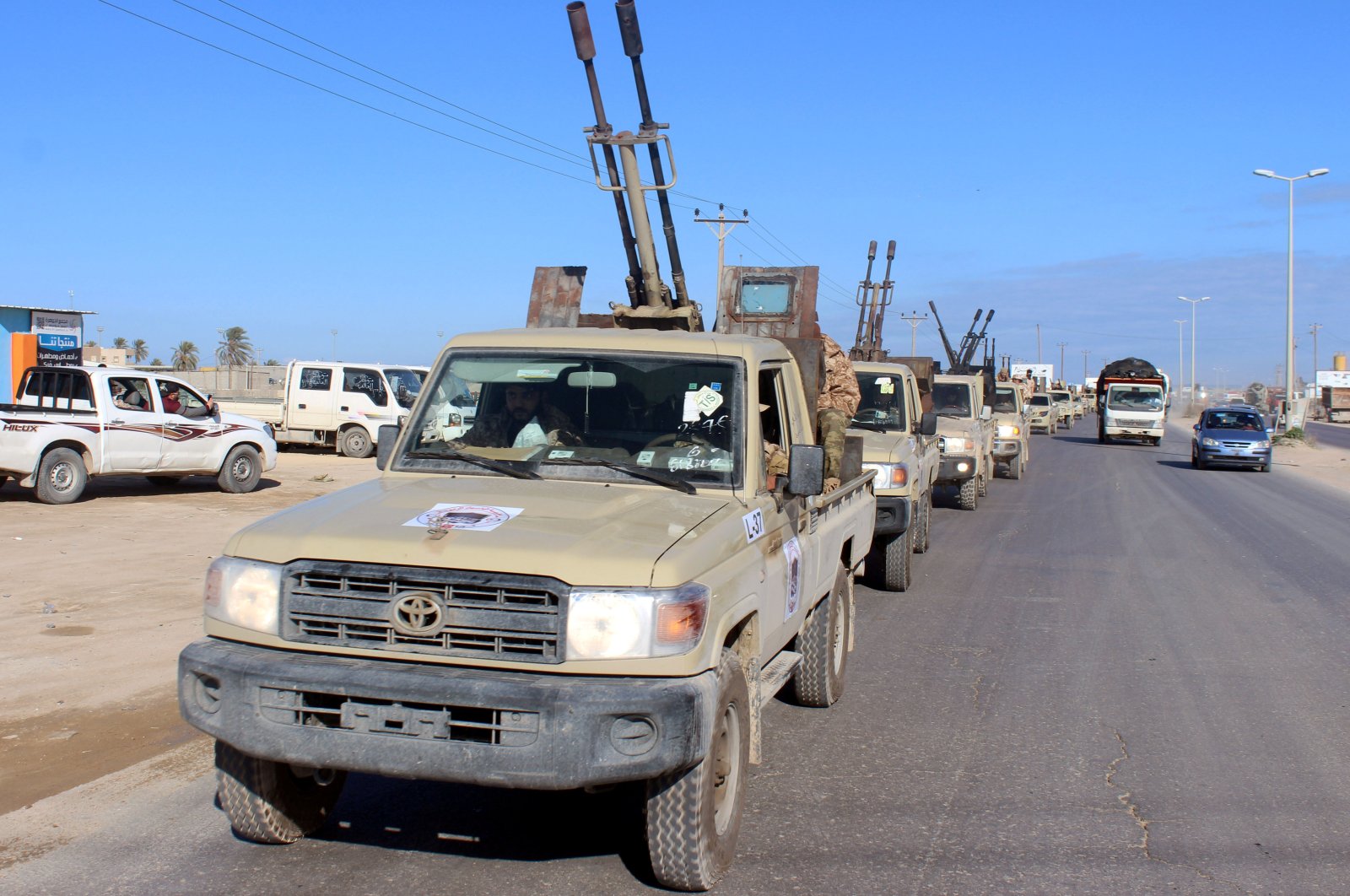 Military vehicles belonging to the internationally recognized Libyan government head out to the front line from Misrata, Libya, Feb. 3, 2020. (Reuters Photo)
by DAILY SABAH WITH AGENCIES
Aug 01, 2021 11:33 am

"We welcome the official opening of the Misrata-Sirte coastal road on July 30, 2021, which has been closed for a long time," it said in a statement.

Turkey also praised the efforts of the Presidential Council, the Government of National Unity (GNU), which is led by Prime Minister Abdul Hamid Mohammed Dbeibah, the United Nations Support Mission in Libya and the 5+5 Joint Military Commission (JMC) that resulted in the reopening.

Turkey expressed hope that the step will facilitate Libyans' daily life and contribute to ensuring lasting stability, peace and prosperity.

"We wish this development would have positive impacts on the unification of security institutions and armed forces under the umbrella of a legitimate civilian authority in the country," it said. "Turkey will continue to support the Libyan people and the Government of National Unity so that the cease-fire can be sustained, preparations of the upcoming elections can carry on and the political process can be advanced."

Libya Friday fully reopened the coastal highway, after unblocking parts in areas controlled by forces loyal to putschist Gen. Khalifa Haftar. "Everything will be done to ensure the safety of travelers," a joint military commission from rival camps said in a statement.

Haftar, the chief of the so-called Libyan National Army (LNA) based in eastern Libya, welcomed the step.

“Based on our full support for every step taken in the direction of bringing Libyans together and for the 5+5 military commission’s agreement, we declare the general command’s approval of the outcome of this committee’s talks on opening the coastal road. We congratulate the Libyan people on this achievement,” Haftar said in a televised address Friday.

However, he also cautioned that peace will not be possible “unless all foreign forces and mercenaries leave the Libyan territories unconditionally" and urged the international community to redouble its efforts to achieve this end.

The highway was mostly reopened last month in a move Dbeibah at the time said would help to "turn a page" after a decade of conflict. The highway connects the war-torn North African country's border with Tunisia to its frontier with Egypt.

A 300-kilometer (186-mile) stretch of the road between the cities of Misrata and Sirte was cut off in 2019 as Haftar's eastern-based forces launched an offensive to seize Tripoli.

Haftar’s campaign ultimately failed in June 2020, after which U.N.-sponsored peace talks brought about a cease-fire and installed an interim government that is expected to lead the country into general elections in December. Yet, the U.N. recently decried the lack of progress made toward holding elections in the war-torn country in December later this year.

The same deal inked in October also stipulated that all foreign forces and mercenaries – which support different sides in the conflict – withdraw from Libya in three months, a provision that has not been met. The U.N. has frequently voiced that the presence of the mercenaries is a threat to peace and stability in Libya.

Libya has been wracked by chaos since a NATO-backed uprising toppled longtime dictator Moammar Gadhafi in 2011, and split the North African country between a U.N.-supported government in Tripoli and rival authorities loyal to Haftar in the east.

The U.N. hailed the step, calling it a “landmark and historic achievement.”

In a statement, the U.N. special envoy to Libya Jan Kubis hailed the reopening of the road as “another step in strengthening peace, security and stability in the country, and in the unification of its institutions.”

"In addition to other significant confidence-building measures achieved thus far, such as the resumption of flights and the exchange of detainees, the opening of the Coastal Road is a critical step to further the implementation of the cease-fire agreement of Oct. 23, 2020, and, equally importantly, to allow the free movement of commerce, humanitarian support and the people of Libya,” said the special envoy for Libya.

Kubis stressed that the next major step for Libya would be that the factions start the withdrawal of all foreign fighters. The U.N. estimated in December that there are at least 20,000 foreign fighters and mercenaries in Libya, including Syrians, Russians, Sudanese and Chadians.

U.N. experts on Friday called on all private military contractors and mercenaries to leave Libya immediately, saying their departure is "overdue" and a "vital precondition" for the peaceful elections planned for this year.

Jelena Aparac, head of the U.N. Working Group on the Use of Mercenaries, and four group members, Lilian Bobea, Chris Kwaja, Ravindran Daniel and Sorcha MacLeod, said that the mercenaries could also affect the security and stability of other countries in the region.

"Nine months after the cease-fire agreement calling for the withdrawal of foreign forces and mercenaries from Libya, mercenaries and private military and security contractors continue to operate in the country," said Aparac.

"Their continued recruitment and presence in Libya impede progress in the peace process and constitute an obstacle for the upcoming elections."

The experts cited "well-trained and well-armed private contractors" from Russia, Syria, Sudan and Chad operating in Libya, some of whom meet the criteria for mercenaries.

They could also negatively affect the security and stability of other countries in the region, the experts warned.

These mercenary and mercenary-related actors, the experts said, must leave immediately, and there must be an immediate end to the transfer of military weapons and equipment into Libya.

"We appeal to the international community to take concrete steps to aid this process," Aparac said.

"If elections are to be held in December 2021 as scheduled, Libyans should be able to undertake that process in a safe and secure environment, and the presence of these actors impedes that," Aparac said.

"There must be real accountability for abuses committed by mercenaries, mercenary-related actors, and private contractors," said the experts.