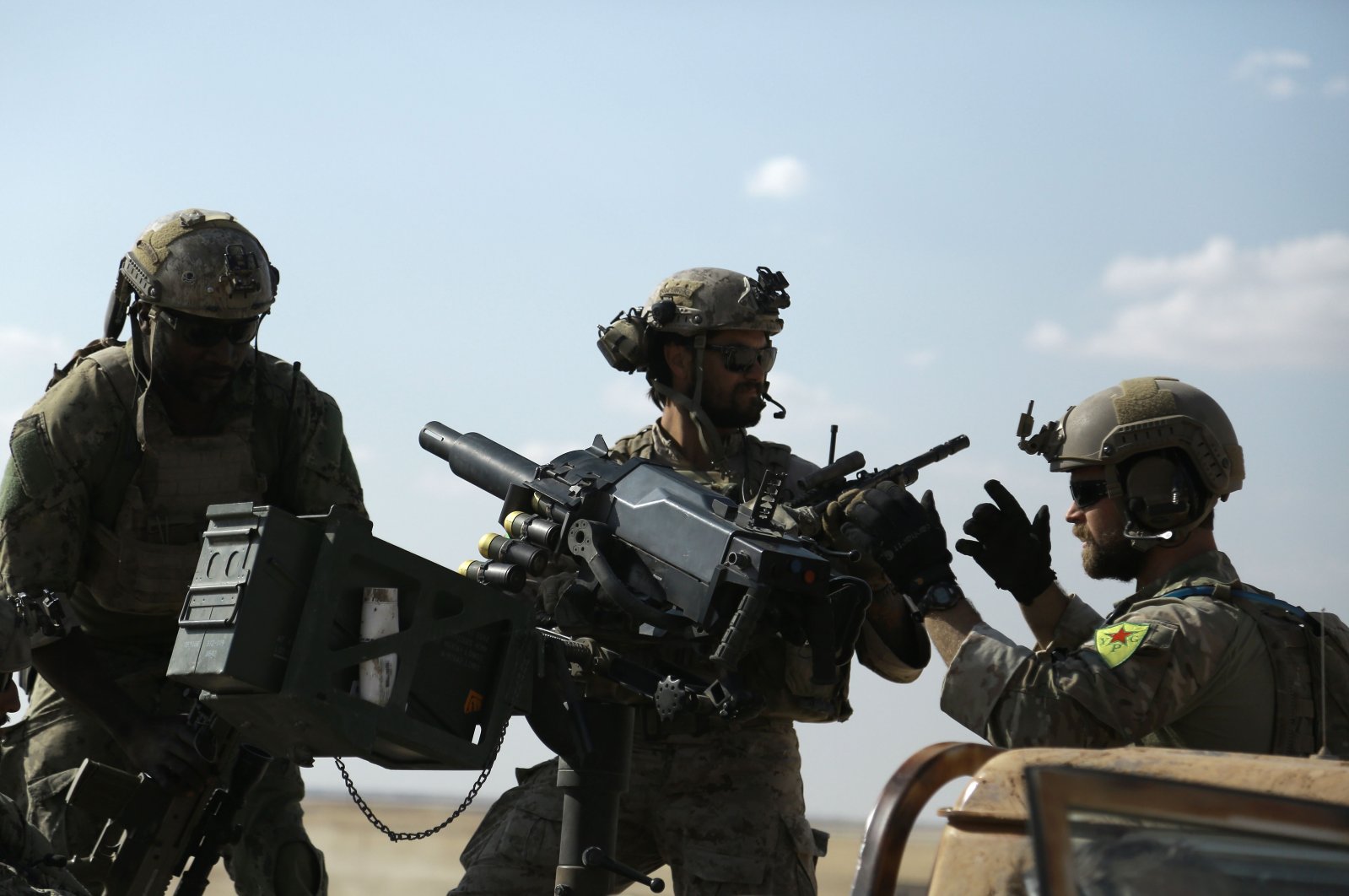 Men in uniform identified as Syrian Democratic Forces (SDF), a rebranded form of the YPG/PKK, and U.S. special operations forces sit in the back of a pickup truck, Fatisah village, Raqa province, northern Syria, May 25, 2016.
by DAILY SABAH
May 01, 2020 1:55 pm

U.S. policymakers sustain Washington’s contradictory policies in Syria as they turn a blind eye to one terrorist group, the YPG/PKK, while they fight another, Daesh, and support a cease-fire in northwestern Idlib province.

At least 40 civilians, including 11 children, were killed and 47 others wounded in a YPG/PKK terrorist attack conducted using a bomb-laden fuel tanker in Syria’s northwestern town of Afrin, on Tuesday. Meanwhile, similar blasts in areas controlled by Turkey-backed opposition fighters have killed scores of people in recent months.

“A car bomb in Afrin by the YPG/PKK terror group that killed 40 civilians, including 11 children, Tuesday shows the terror group has no sense of sacrality in the month of Ramadan," said Turkish presidential spokesman İbrahim Kalın during a videoconference held by the Atlantic Council’s Turkey branch in which U.S. Ambassador to Ankara David Satterfield and U.S. Special Representative for Syria Ambassador James F. Jeffrey also participated.

Noting the terrorist organization’s most recent killings in northern Afrin on Tuesday, Kalın reiterated that Turkey's determination to defeat all terror groups in Syria, and the YPG/PKK in particular, will continue.

On the contrary, the U.S.-led coalition against Daesh provided $1.2 million in supplies for COVID-19 prevention efforts and detention operations to YPG/PKK terrorists last month. Additionally, the U.S. Defense Department designated $200 million in 2020 for support to YPG/PKK terrorist-led forces, specifically for the anti-Daesh mission. Under the pretext of fighting Daesh, the U.S. has provided military training and given truckloads of military support to the YPG/PKK, despite its NATO ally's security concerns.

Close partnership will continue despite differences

While both Jeffrey and Kalın emphasized the continued close alliance and partnership between Turkey and the United States, Kalın said that the bilateral relations promise a wide range of cooperation despite the fact that significant disagreements still remain especially concerning U.S. support to the PKK/YPG and the Gülenist Terror Group (FETO).

Underlining the differences at the policy level, Kalın explained that the Syrian conflict “has been compartmentalized” so that “while you deal with one problem in the east of Syria, you have a different kind of alliance system. While in the West, you have a different situation and your allies change,” he said.

These differences have prompted Turkey to continue to pursue dialogue with Iran and Russia in the Astana process, which is continue in the future as Kalın emphasized. “No major reconstruction of Syria is possible before a political solution,” he said.

Stressing that the Idlib cease-fire between Turkey and Russia is holding with regular joint patrols moving unhindered, Kalın also noted that Turkey's aim in Syria is to stop the fighting and alleviate humanitarian suffering on the ground. He said problems in the province have been building for some years due to inaction from the international community, and the solution there will accordingly take some time as well.

Kalın also added that Turkey will continue to be a part of the U.N.-led Geneva process and the parallel Astana process with Russia and Iran. These two initiatives should complement and support each other, he added.

“Turkish and Russian militaries have been having their regular patrols there ... and it seems to be holding,” he explained. However he also warned that the Assad regime has never been in favor of the pause in fighting, and “we know that they will do everything in their capacity to undermine it.”

'Only good thing about Astana is Turkey'

“The only good thing about the (Astana) process” is that our partner Turkey is a part of it” Jeffrey continued.

Offering assistance to Russia against Daesh

Meanwhile, Washington has offered Russia assistance in eliminating a resurgence of the Daesh terror group in Syrian regime-controlled areas, Jeffrey said. He also said the terror group has been emboldened in Badiyah Desert, mounting attacks and briefly holding territory as regime forces have been focused on northwest Syria's Idlib province. "One consequence of the focus on Idlib by what's left of Assad's inept army, is that few forces are left to deal with ISIS in the southwest in the Badiyah Desert," Jeffery explained.

Turkey has worked to protect the local civilian population as well as it rids the wider region of terrorist elements.