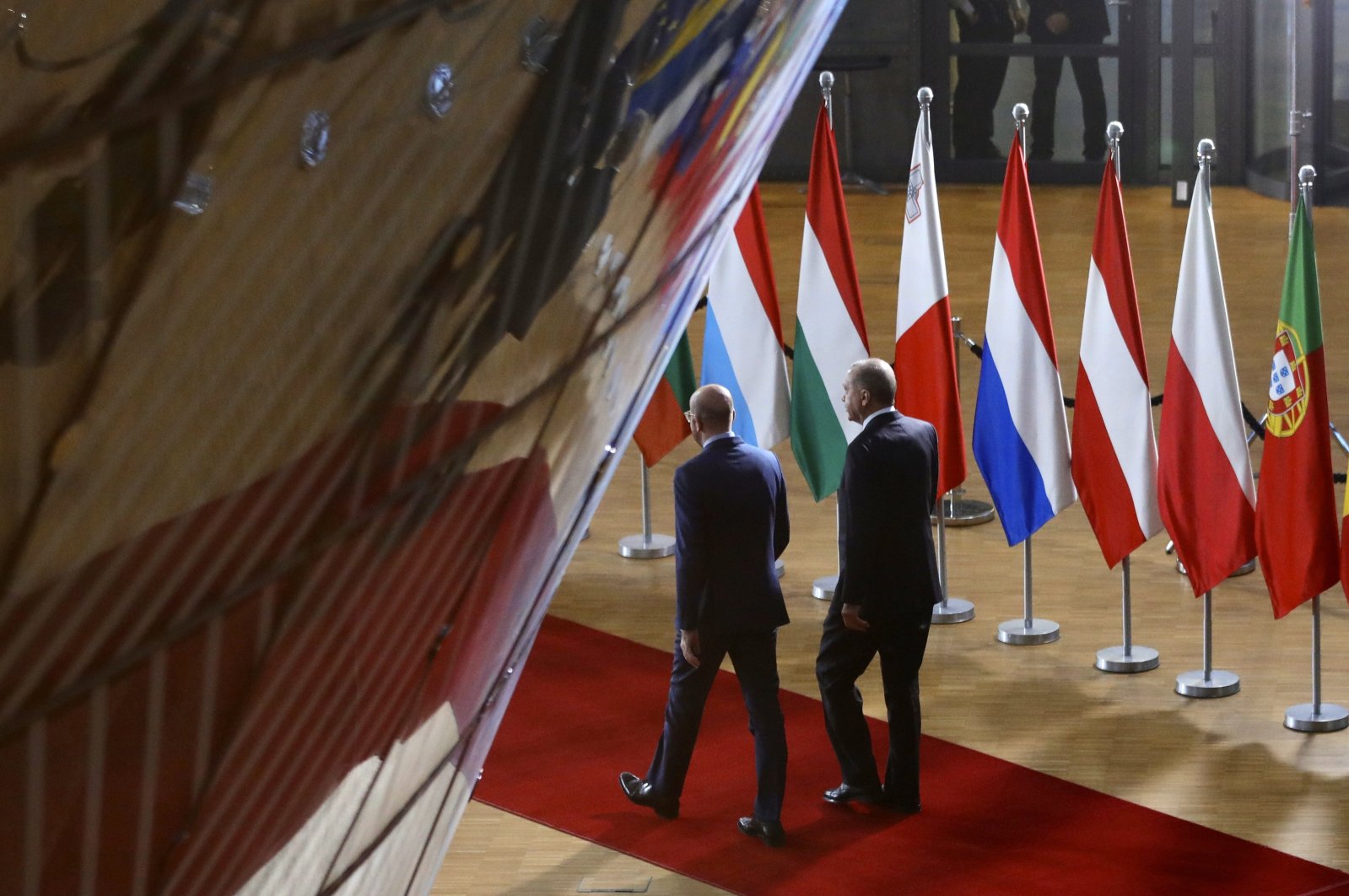 President Recep Tayyip Erdoğan urged European leaders to take an impartial stance against Turkey regarding the issue of the Eastern Mediterranean, as he noted Ankara’s policy aims to determine maritime jurisdiction in line with international law and protect its sovereign rights and jurisdiction regarding its continental shelf and guarantee Turkish Cypriots’ rights on access to hydrocarbon resources.

Erdoğan sent a letter to EU officials and the leaders of member states, informing them about Turkey’s stance on the Eastern Mediterranean, Anadolu Agency (AA) reported Wednesday.

“I hope that the EU supports our thoughts, abandons the biased stance against Turkey as a candidate country and stops giving unconditional and unjust support to Greece and Greek Cypriot administration’s maximalist discourse,” Erdoğan said, adding that the EU’s biased attitude against Turkey contradicts EU and international laws.

The Turkish president said finding a peaceful solution to the Eastern Mediterranean issue is everyone’s joint responsibility and that the EU should support cooperation and dialogue and avoid taking steps and making decisions that would further deteriorate the crisis.

Noting that Turkey-EU relations have been through a series of difficult tests in the past six decades, Erdoğan said Turkey anticipates cooperation among all parties, an equal share of resources and peace and stability in the Eastern Mediterranean.

“We hope that hydrocarbon resources form the basis for a resolution and a greater EU the same way coal and steel formed the basis for the EU’s point of origin,” Erdoğan said in his letter, adding that Turkey is not behind the tensions, Greece and the Greek Cypriot administration are.

He continued by saying that Greece and the Greek Cypriot administration have consistently disregarded Turkey and the Turkish Cypriots, have taken unilateral steps and have adopted a fait accompli policy, as the EU continued to remain silent since 2003.

“The Greek Cypriot administration, which became an EU member in 2003, has signed maritime jurisdiction agreements with neighboring countries in 2003, 2007 and 2010, in complete disregard of Turkish Cypriots,” Erdoğan said, adding that the administration started its first drilling in 2011.

Referring to Greece’s “maximalist” ambitions to limit Turkey to the Gulf of Antalya, Erdoğan said Athens and Greek Cypriots have been trying to enforce the Map of Seville on Turkey through the EU, but the map’s borders are actually the EU’s outer maritime borders.

The president also noted that Greece’s demands for Turkey to halt hydrocarbon activities in the Eastern Mediterranean are unjust, as he reiterated Turkey’s commitment to start a dialogue without preconditions.

“On the other hand, as the co-founders of the now-defunct Republic of Cyprus and as the joint owners of the island, Turkish and Greek Cypriots need to facilitate a cooperative mechanism regarding fair distribution of income from hydrocarbon resources,” Erdoğan said, adding that the sides do not need to wait for a solution to the Cyprus issue to establish such a mechanism.

Erdoğan also said it would be beneficial to establish a comprehensive energy cooperation forum on the island, which would bring all sides together and that Turkey would fully support such an initiative.

EU officials said they were considering new sanctions on Turkey over gas exploration in the Eastern Mediterranean.

The bloc has already slapped sanctions on companies involved in the drilling, and Turkey's EU accession process has been put on hold.

Turkey has demanded that the host of disagreements it has with Greece be handled as a whole. Those include territorial waters in the Eastern Mediterranean, the continental shelf, demilitarization of the islands, the legal status of geographical formations, the width of national air space and search and rescue operations.

Turkey also demands that the topics of the continental shelf and exclusive economic zones (EEZ) should be approached with equitable principles, not Greece's current expansionist approach.