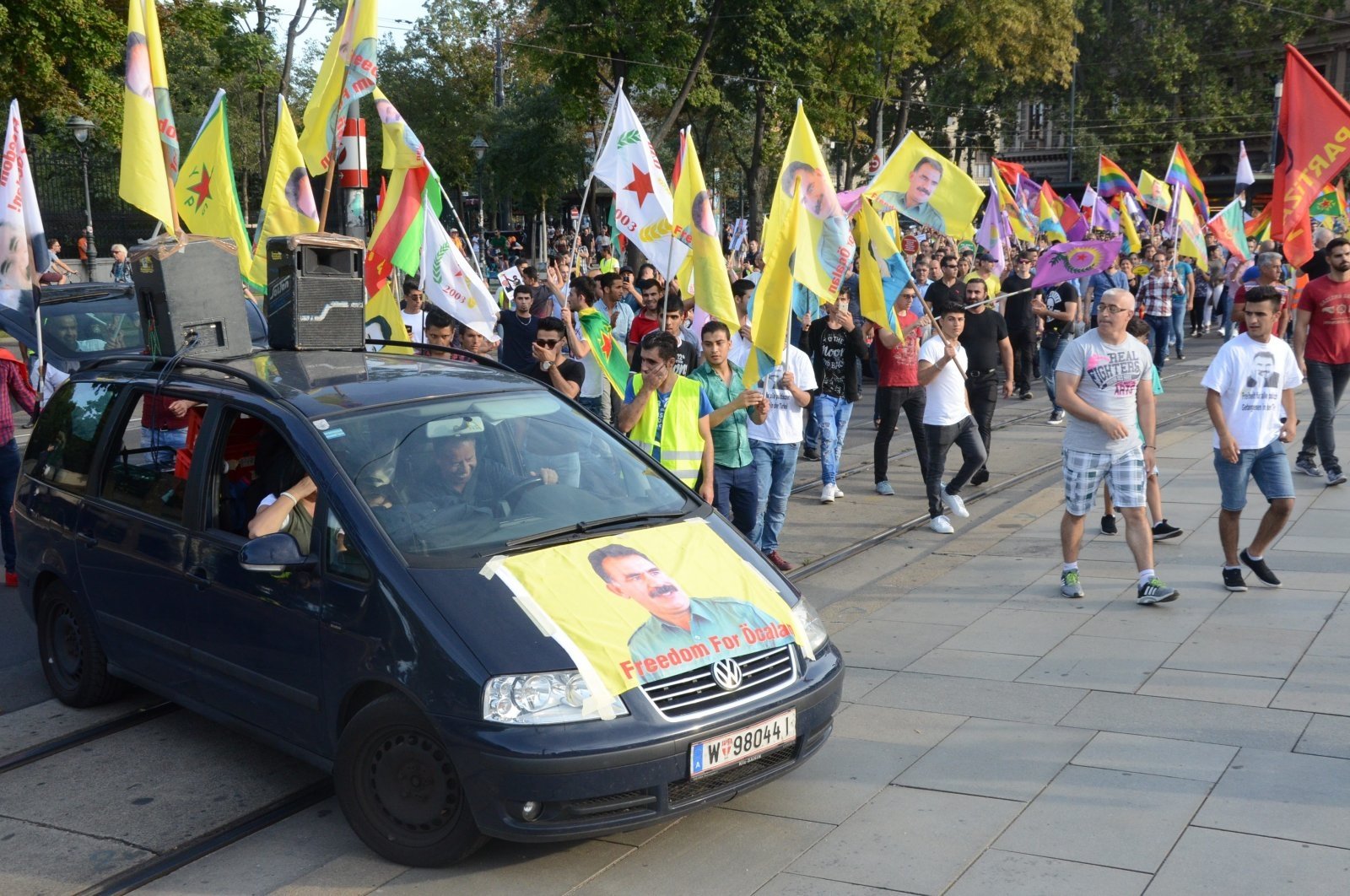 Pro-PKK protesters wave flags of the terrorist organization and a picture of imprisoned terrorist leader Abdullah Öcalan is seen on a vehicle in the Austrian capital Vienna, June 28, 2020. (AA Photo)
by Daily Sabah with AA Jun 03, 2022 9:32 am
RECOMMENDED

Turkey has been frequently voicing concerns over European countries' tolerance toward the PKK, however, the terrorist organization still maintains a strong presence in the region, being able to hold rallies and engage in recruitment activities.

On Wednesday, a group of PKK protestors held a march in central London shouting anti-Turkish slogans, marching from Highbury and Islington station to Leicester Square under a police cordon.

The group of around 50 men and women carried pictures of Abdullah Öcalan, the terrorist group's jailed ringleader, and various PKK symbols and flags. Police were seen walking alongside the marchers, disrupting the normal traffic flow.

After supporters of the PKK terrorist group recently held demonstrations in France and Germany – both members of the European Union – the Turkish Foreign Ministry on Monday summoned the envoys of both countries to register their protest, Turkey’s top diplomat said on Tuesday.

"We have summoned both ambassadors to the ministry ... Our missions in those countries (France and Germany) have also made contacts," said Mevlüt Çavuşoğlu, adding that the envoys were given a diplomatic note stressing that no more such demonstrations should be allowed.

The PKK is listed as a terrorist organization by Turkey, the EU and the U.S. and is responsible for the deaths of 40,000 people, including women, children, and infants. The YPG, which also has a presence in Europe, openly sanctioned by several governments, is the PKK's Syrian branch.

The EU's law enforcement agency Europol classified the PKK as an "ethno-nationalist" and "separatist" terrorist group, saying in its 2020 and 2021 reports that the group still uses European countries for propaganda, recruitment and fundraising activities, even though in most it is officially banned.

"The group maintained an apparatus that provided logistical and financial support to its operatives in Turkey and neighboring countries and promoted its political objectives. This apparatus mainly operated under the guise of legally recognized entities, such as Kurdish associations," said Europol's EU Terrorism Situation & Trend Report.

According to the report, PKK recruitment networks within Europe also played a part in EU citizens or residents joining conflicts in the Middle East, such as Syria and Iraq.

The PKK also "continued to use Europe for fundraising by legal and illegal means. These included fundraising campaigns and donations as well as extortion and other organized criminal activities," said Europol.

The report said that one individual was arrested in Germany in 2020 for being in charge of PKK structures in several federal states. Another was convicted "of charges relating to his role in the Mainz area (Rhineland-Palatinate, Germany) as a full-time PKK cadre as of early May 2018," as he was in charge of organizing and supervising fundraising campaigns and events, the report said.

The terrorist fundraiser sent some €223,000 ($238,460) to the PKK while receiving a monthly salary of €250 as financial support, in addition to reimbursement of travel and other expenses.

Similarly, Europol stated in its 2020 report: "Members and sympathizers of the PKK continued to be involved in legal and illegal activities to raise funds to support the group and its affiliates."

Several European countries told Europol that the group was also involved in serious and organized criminal activities, according to the report.

PKK sympathizers vandalized mosques and shops belonging to the Turkish community in Germany. Such incidents were also reported in Belgium and Switzerland, Europol said in a 2020 report.

This May, at a children's festival in Basel, Switzerland, a group of 30 PKK supporters verbally attacked Turkish families taking part in the festival. Then they threw iron barriers meant to mark off the celebration area at them, leaving at least six people wounded and needing medical treatment.

The Turkish government denounced the attack.

A report by the agency and Europol decried the growing gang violence and drug-related homicide in Europe and cited the terrorist PKK's role in this.

"The PKK ... has been reported to be involved in organized crime," said the 260-page 2019 EU Drug Market Report, citing "examples of its engagement in the drug trade in the EU."

"Organized crime may feed terrorism through a variety of channels, including supplying weapons, financing terrorist activities through drug distribution and infiltrating financial markets," it warned.

In 2018, Interior Minister Süleyman Soylu said the terrorist PKK controls the vast majority of drug trafficking in Europe, earning billions in the process.

"Especially in Europe, the PKK controls 80% of the drug trade, and it is estimated that the terrorist group earns around $1.5 billion a year," said Soylu, adding that it uses its profits from illegal drugs to buy weapons for attacks.

Individuals who joined the YPG/PKK out of "left-wing extremist ideological convictions," acquire or strengthen combat skills that could "be used in terrorist activities in Europe," said an internal EU discussion paper by Gilles de Kerchove, coordinator of the office of EU Counter-Terrorism, released last year by nonprofit monitoring group Statewatch.

It added that for many left-wing violent extremists in Europe, solidarity with left-leaning militias in northern Syria, such as YPG/PKK terrorists, carries "great importance."

The document said that despite this, European authorities do not prosecute "volunteers" who join the YPG as armed fighters because the bloc does not recognize the group, which is the PKK's offshoot in Syria, as a terrorist group.

"The fact that many of them deny any participation in actual combat further complicates the possibility of prosecuting them," added the document.