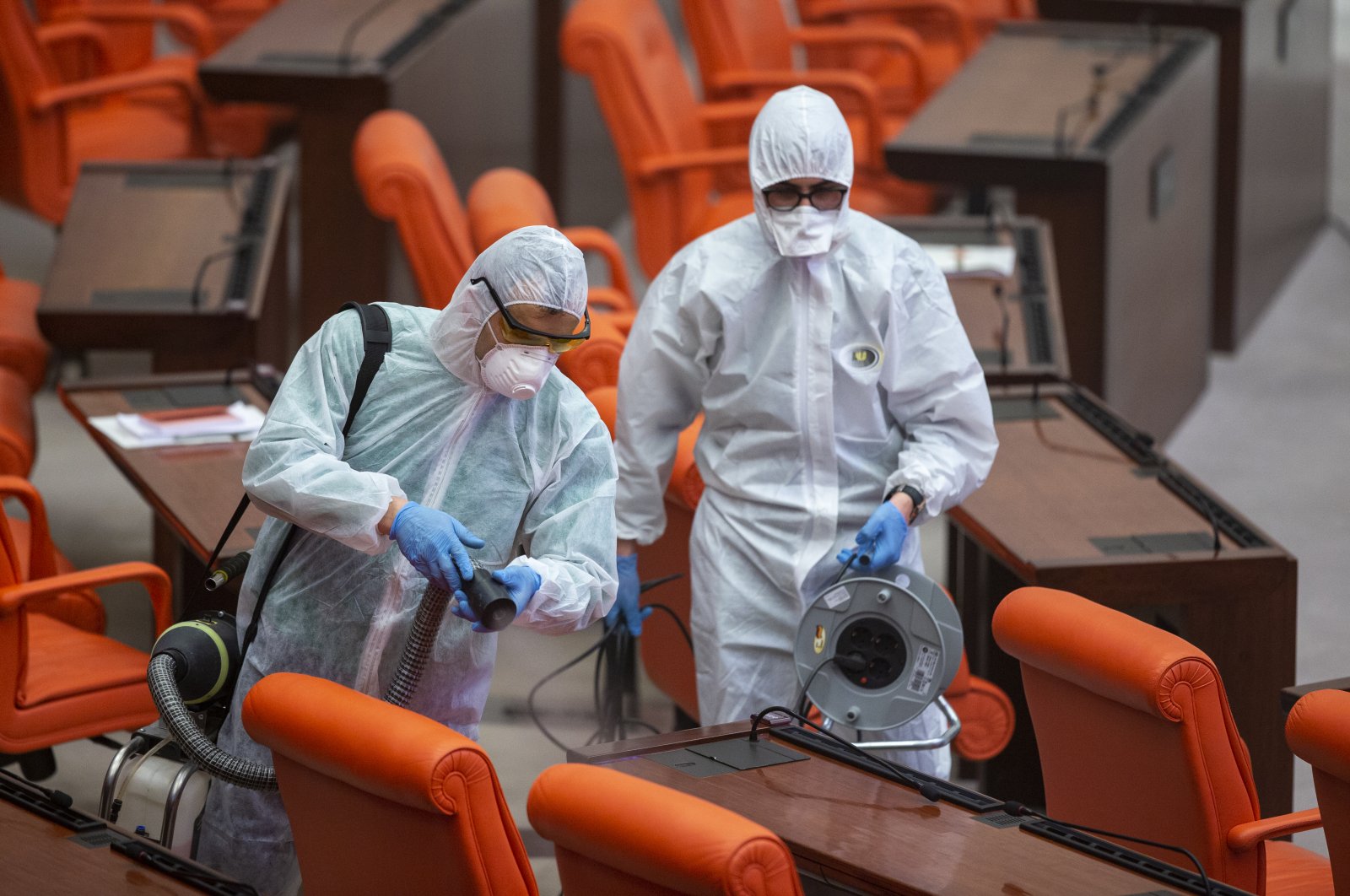 Since cases of the novel coronavirus (COVID-19) appeared in Turkey, the Turkish Grand National Assembly has started to take precautions coordinated with the Health Ministry, March 13, 2020. (AA Photo)
by Daily Sabah with AA Mar 15, 2020 3:26 pm
Edited By Dilara Aslan
RECOMMENDED

A coordination and support center has been established as part of the Foreign Ministry tasked with managing the threat posed by the coronavirus and will be on active duty 24 hours a day, Foreign Minister Mevlüt Çavuşoğlu stated Sunday.

“Today, together with deputy ministers Sedat Önal, Faruk Kaymakçı and Yavuz Selim Kıran, we have reviewed our work regarding the precautions taken against the coronavirus and visited the center,” the minister told Anadolu Agency.

The minister said that a team would be on duty every night and that other hotlines had been opened in countries with high numbers of Turkish people.

“We are in contact with countries where our citizens live – of course, we have problems with some, however: Italy, for example, has closed all its borders, nobody can exit or enter,” he said.

“A significant number of countries have been asking for help both in terms of information sharing and medical equipment from Turkey due to the successful precautions we have taken since the start of the outbreak,” Çavuşoğlu added.

Diplomatic missions to be informed on coronavirus

The Health Ministry has sent the Foreign Ministry a note regarding the necessary precautions that have to be taken toward personnel working at diplomatic mission representations in Turkey and at international institutions within the scope of tackling the novel coronavirus. Foreign personnel who have recently traveled abroad or have been in contact with those who have returned from abroad have been told to apply to health institutions determined by the Health Ministry in the case of fever, coughing or difficulties breathing in the last 14 days.

The statement, which detailed information about the relevant representations, said that brochures, leaflets, contact information of the quarantine centers and health institutions should be directed to foreign personnel.

The ministry further stressed that the dial-184 hotline at the Health Ministry’s communication center would operate 24 hours a day and have staff with foreign language skills on standby.

Meanwhile, disinfections have been carried out continuously in all courthouses, ministry buildings and penitential institutions. Personnel are also being trained on the proper guidelines for disinfection.

Accordingly, the Turkish Parliament has barred visitors until March 31 as a precaution against the spread of the coronavirus.

"During this period, the work of Parliament will continue, and the parliamentary staff will carry out their duties," the statement of the parliament said Friday, adding that after March 31, the measure would be reevaluated.

Political parties have also canceled their parliamentary group meetings for a period. Accordingly, the ruling Justice and Development Party's (AK Party) Central Decision and Executive Board (MKYK) and Central Executive Committee (MYK) meetings, which were to take place under the leadership of President Recep Tayyip Edoğan on Sunday, were also delayed – just as the weekly group meeting at the Parliament has been postponed, as both the Parliament and the headquarters of the party are being disinfected.

All public libraries under the Culture and Tourism Ministry will also be closed between March 16-30 as part of the measures.

The coronavirus, officially known as COVID-19, originated in Wuhan, China, last December and has since spread to at least 114 countries.