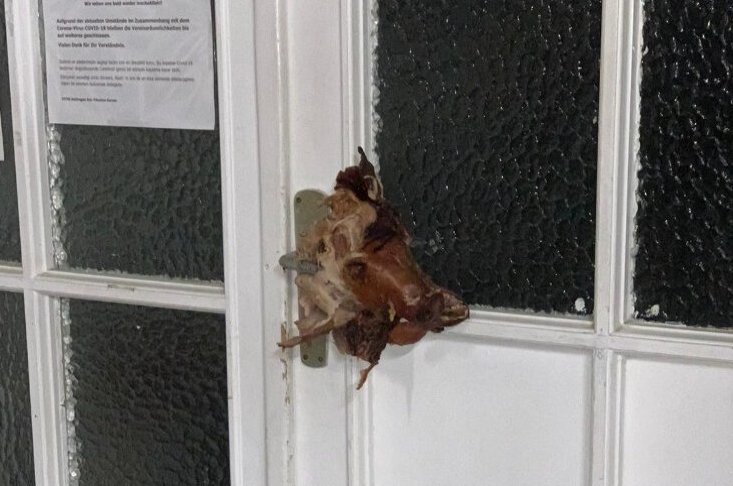 Two unidentified people placed a pig's head Saturday night on the door of the Fatih Mosque of the Turkish-Islamic Union for Religious Affairs (DITIB) in the southern Germany city of Vaihingen, local media reported Sunday.

The incident was recorded by the surveillance cameras at the mosque. In the footage, the perpetrators are seen driving a company van from a neighboring city. After they attached the pig’s head to the main entrance of the mosque, they took photos of their act. The unidentified individuals are said to be between 25 and 30 years old.

About an hour after the incident, members of the mosque contacted the police, who launched an investigation.

The head of the mosque, Latif Pekmezci, was appalled at the attack and strongly condemned it.

The state and federal chairs of the DITIB and Turkish Ambassador Mehmet Erkan Öner on Sunday at noon visited the mosque, where the head of the police informed the ambassador about the investigation, a statement by the mosque read.

Turkey's Justice Minister Abdulhamit Gül condemned the attack in a tweet Monday, calling it the "latest example of racist hatred toward Muslims."

On Monday, Foreign Minister Mevlüt Çavuşoğlu joined the condemnation in a Tweet saying that the perpetrators should be caught immediately. "Even during the holy month of Ramadan and the epidemic, racism and hostility against Islam continues in Europe. The symbol used in this ugly event actually depicts this sickly mentality," he said.

In 2019, 184 attacks on mosques were recorded in Germany – occurring on average every other day.