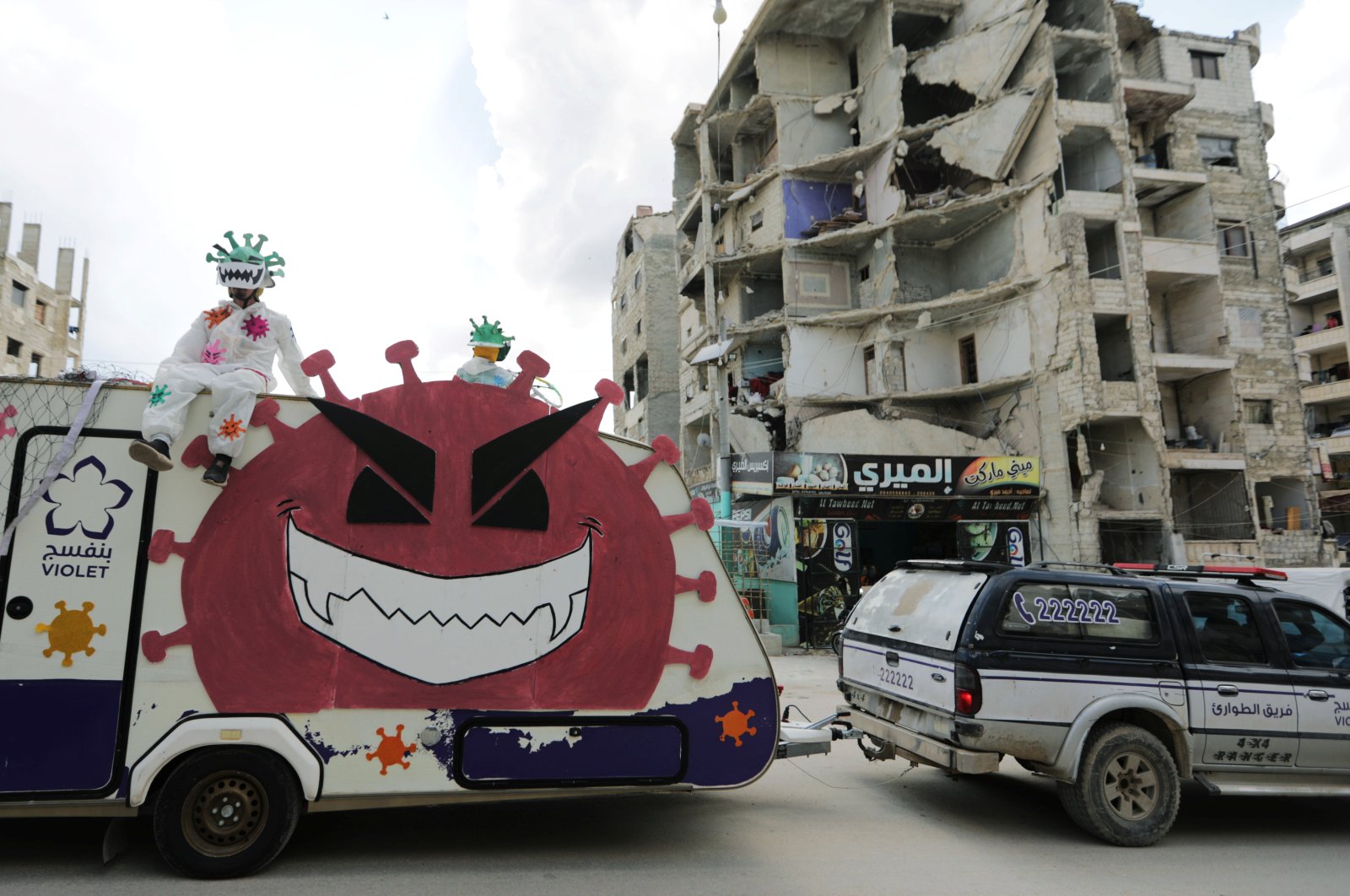 Volunteers dressed in coronavirus-themed costumes stand on a vehicle during a campaign organised by the Violet Organization, in an effort to spread awareness and encourage safety amid coronavirus disease (COVID-19) fears, in the opposition-held Idlib city, Syria, April 29, 2020. (REUTERS Photo)
by REUTERS
May 01, 2020 11:20 am

A white caravan splashed with images of the coronavirus roams the streets of opposition-held Idlib city in northwest Syria where a volunteer tell passersby of the virtues of social distancing and hygiene to avoid infection.

"We remind people that they should stay at home so they don't mingle and remind them of a lurking danger that could at any moment enter our areas," Ibrahim Sarmini, a volunteer in the charity called Violet, said of the campaign in the war-torn town.

Syria’s northwest does not yet have a confirmed case of the coronavirus, but doctors fear the area’s ravaged medical infrastructure and overflowing camps would quickly turn any outbreak into a humanitarian disaster.

"If the disease enters our areas it will be a catastrophe that no one can stop," said Abdullah al Thamer, 33, a bemused resident who watched as the caravan passed by his home.

Doctors warn that camps would not cope in the event of an outbreak, with hospitals already struggling to treat even basic illnesses after nine years of war.

Even advice to stay at home is rarely heeded by many in the city whose inhabitants have been uprooted by war and most people need to go to work as daily wage earners to survive, residents say.

The Bashar Assad regime, backed by Russia and Iran, launched a push earlier this year to capture Idlib, sending hundreds of thousands of residents fleeing, many of them people who were already displaced.

The population of the province had gradually increased with many people running from regime attacks and terrorist torture. However, the displacement of civilians has intensified since mid-December when the Russian-backed regime started a new assault to seize the last opposition bastion. It is estimated that over 1 million Syrians have moved near the Turkish border due to intense attacks over the last year, while half of this number was displaced after November 2019.

After heightened tensions, Russia and Turkey in March reached an agreement to halt violence and the flow of displacement. The camps in northwest Syria are densely populated, and there is insufficient relief reaching them, while the health and education sectors struggle to provide the required services.

Even though nongovernmental organizations, the United Nations and Turkish institutions and relief organizations struggle to meet the needs of the many civilians in the war-torn country, in the face of the new coronavirus threat, aid is insufficient.

In a situation where even the most developed and modern countries are desperate in the fight against the virus, it is hard to expect a country with almost no standing hospital and where children cannot find water to wash their hands to cope with the threat. Only half of the countries’ medical facilities are still operating.