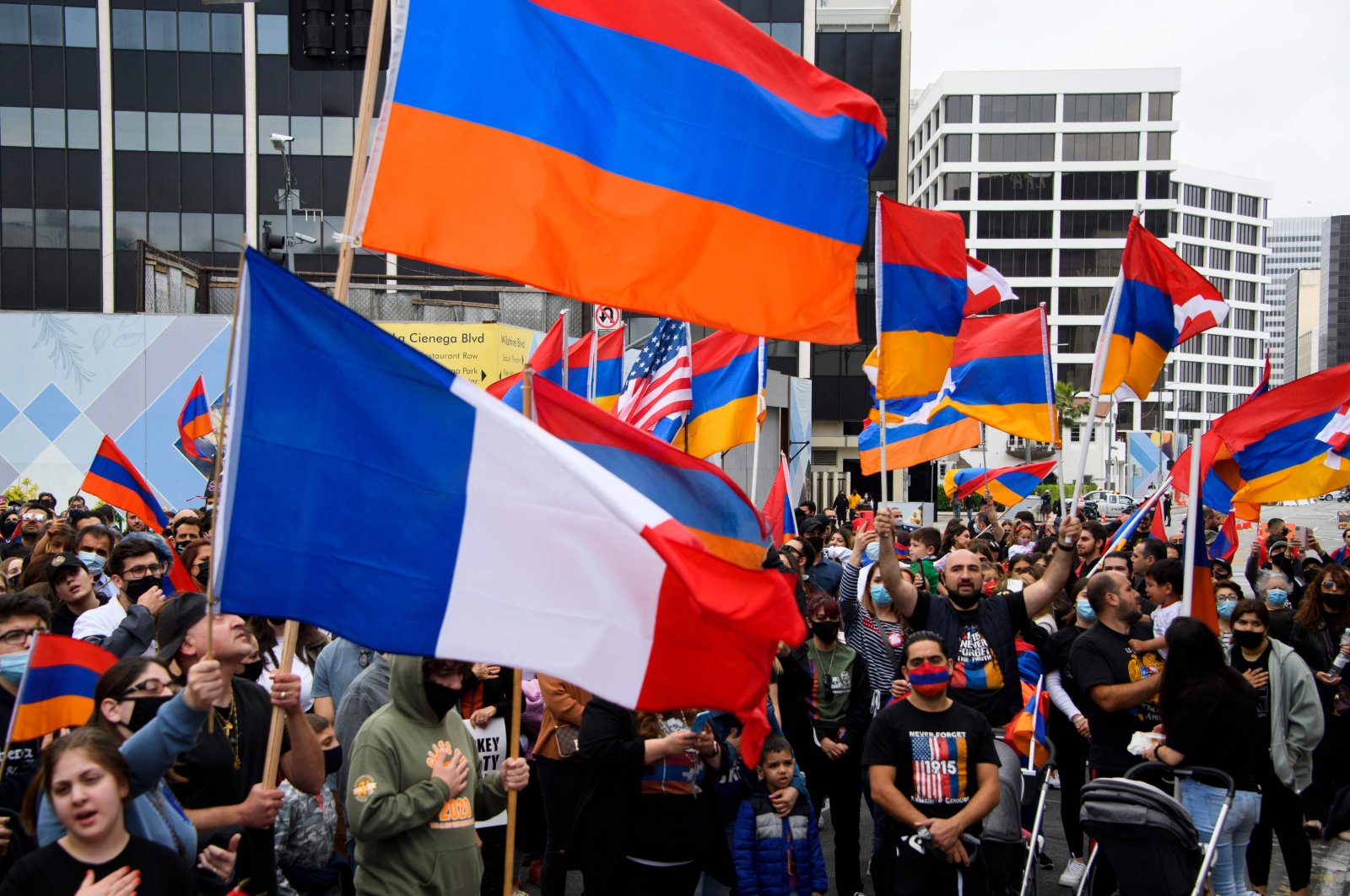 A French flag is waved alongside Armenian flags as people protest outside of the Turkish Consulate on the anniversary of the 1915 events, in Los Angeles, U.S., April 24, 2021. (AFP Photo)
by Daily Sabah Apr 28, 2021 9:45 am
RECOMMENDED

Turkey’s deputy foreign minister on Tuesday criticized the forced resignation of a Turkish city councilor in France over a social media post that commemorated Turkish diplomats assassinated by Armenian terrorists.

Yasin Yıldırım, a member of the city council committee in France’s Valence was asked to resign by Mayor Nicolas Daragon after he liked a social media post by the Turkish Foreign Ministry that honored the diplomats slain by the Armenian terrorist group ASALA.

The post in question was shared by the ministry on Facebook and included the names of Turkish diplomats assassinated along with a caption that read, “We did not and will never forget our colleagues slain by the Armenian terrorists.”

Following pressure from his superiors and complaints from Armenian associations in the country, Yıldırım agreed to step down from his post. His forced resignation, however, drew criticism from Turkey.

“Those who try to teach freedom of speech to others at every opportunity seem to think they have the right to oppress anyone when they are confronted with disturbing truths,” Turkey’s Deputy Foreign Minister Yavuz Selim Kıran wrote on Twitter on Tuesday.

“It is unacceptable to force a politician to resign for honoring diplomats assassinated by terrorist group ASALA,” he added.

During last year's election campaign, Armenian associations targeted Yıldırım for liking content that denied the Armenian claims regarding the 1915 events.

Thanks to strong pressure from Armenian lobbies, a law was enacted in 2001 in the French Parliament recognizing the Armenian's claims about the events of 1915.

Additionally, the law, which was passed by parliament under pressure from the Armenian diaspora, criminalized denying the Armenian version of events. The law also stipulated that those who commit the offense could be sentenced to a year in prison and a fine of 45,000 euros ($54,345).

The French Constitutional Council, upon negative reactions to the law, found it violated freedom of expression and annulled it.