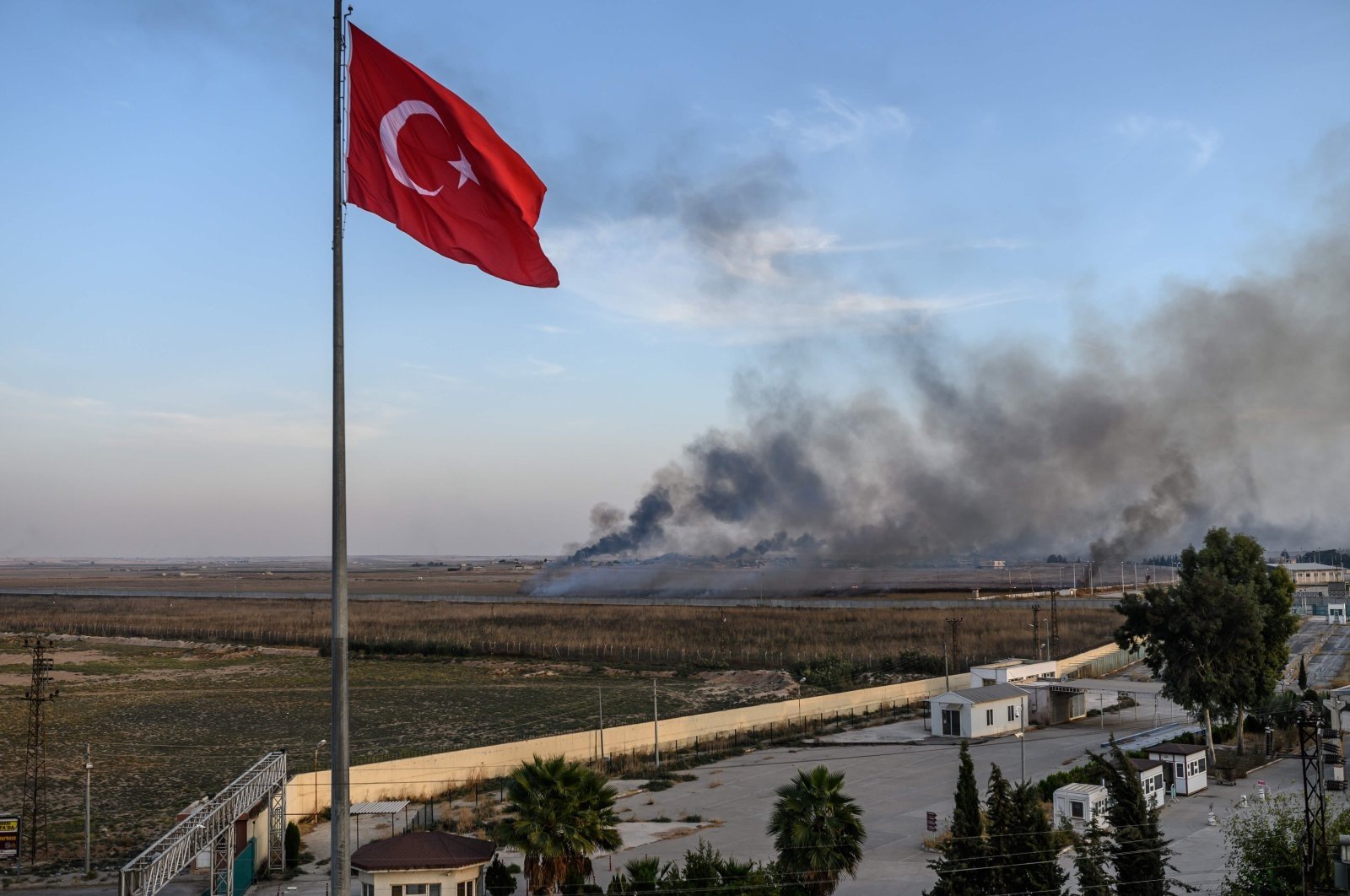 Smoke rises from the Syrian town of Tal Abyad, in a picture taken from the Turkish side of the border where the Turkish flag is seen near Akçakale, Oct. 10, 2019. (AFP Photo)
by Daily Sabah with Agencies Jun 02, 2022 11:43 am

As Turkey continues to push for a military operation in Syria’s north to secure its southern border and the lives of Syrian civilians, the YPG shows no halt in targeting innocent lives in the region

The Syrian wing of the PKK terrorist organization, the YPG, killed three people and wounded others in a rocket attack on a residential area in northern Syria on Wednesday.

According to local sources, who spoke to Anadolu Agency (AA), the YPG targeted the city center of Tal Abyad with seven shootings of multiple rocket launchers. The 12 wounded were immediately taken to the hospital.

The White Helmets Syrian civil defense group on the same day said that the YPG "targeted a car with heavy machine guns on the Al Muhsinli Halunji road in the Jarabulus area, the eastern countryside of Aleppo."

The attack comes after Turkey has been recently increasingly calling on the international community to take action against the YPG and the PKK, warning about the threat it causes to both Turkey’s national security as well as locals living in opposition areas.

President Recep Tayyip Erdoğan on Wednesday had renewed vows to tackle the YPG in northern Syria.

"We are taking another step in establishing a 30-kilometer (18.6-mile) security zone along our southern border. We will clean up Tal Rifaat and Manbij", he said, referring to the two northern Syrian cities.

Erdoğan said they would then proceed, "step by step, into other regions."

Erdoğan on Tuesday told Russian President Vladimir Putin that a 2019 agreement signed between the two countries allowed for the creation of a security zone along the Turkish-Syrian border.

The terrorists often target Turkish forces who provide security in the Euphrates Shield, Olive Branch and Peace Spring areas, and try to infiltrate the positions of Syrian opposition fighters from regions that the terrorist group was supposed to withdraw from under the agreements with the United States and Russia.

The top U.S. diplomat told a joint news conference with NATO Secretary-General Jens Stoltenberg that "any escalation there in northern Syria is something that we would oppose," underlining Washington’s support for "the maintenance of the current cease-fire lines."

"The concern that we have is that any new offensive would undermine regional stability (and) provide malign actors with opportunities to exploit instability," Blinken said.

Since 2016, Turkey has launched a trio of successful counterterrorism operations across its border in northern Syria to prevent the formation of a terror corridor and enable the peaceful settlement of residents – namely, Euphrates Shield in 2016, Olive Branch in 2018 and Peace Spring in 2019.

The signaling of a new operation comes amid increasingly hostile sentiment toward refugees in the country, fuelled by some parties and political figures. Main opposition Republican People’s Party (CHP) Chairperson Kemal Kılıçdaroğlu and other politicians had announced they would send back Syrian refugees if they win next year’s presidential and parliamentary elections. However, the debate on migrants living in Turkey is mainly fuelled by the small far-right Victory Party (ZP).

Interior minister Süleyman Soylu on Wednesday during a campaign meeting of the Disaster and Emergency Management Authority (AFAD) for 100,000 briquette houses in Idlib, said that so far 59,679 houses were complete.

Soylu further indicated that 503,350 Syrians have returned to their country since Operation Euphrates Shield. Criticizing the lack of support by western countries on establishing stability in Syria for the displaced, Soylu said: “The normalization of life in this region is vital for both our security and to end this humanitarian tragedy.”

Currently, Turkey hosts nearly 3.8 million Syrian migrants, more than any other country in the world. The country also leads humanitarian aid efforts for Syrians in Turkey and opposition-controlled areas of northern Syria.