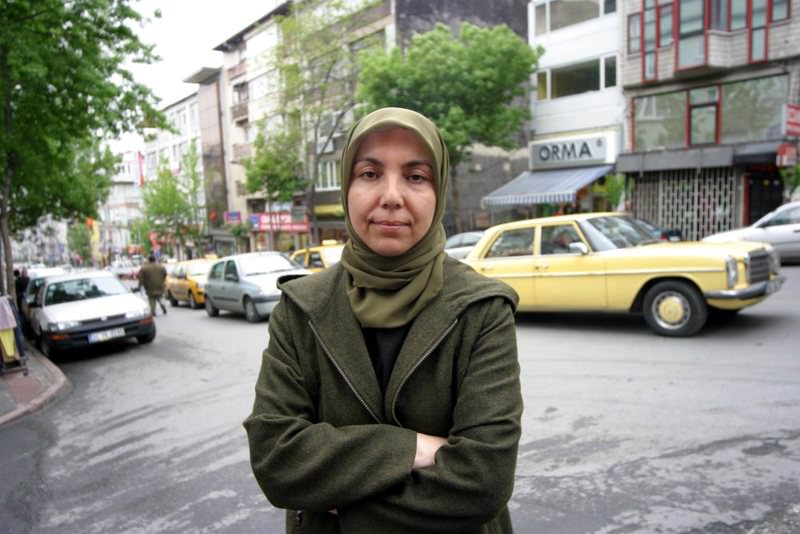 It was a fascinating and somehow shocking experience for me to read the first volume of Yıldız Ramazanoğlu's short stories titled "Derin Siyah" (Deep Black). It was fascinating thanks to the stories' capturing air, while I was shocked due to that my conformist expectations of a book of stories written by a Muslim writer who wears a headscarf was challenged by Ramazanoğlu's style, which was full of surprises and forces you to change your point of view in order to gain a more lucid image of yourself and others.

I think Ramazanoğlu is a great humanist in the sense that William Faulkner was a great one, too, thanks to his forgiveness of the criminal and psychotic in his fiction. Ramazanoğlu is not only forgiving, she also has an inexhaustible energy to help both the oppressed and the oppressor.

Ramazanoğlu's stories, the mentality she reflects in her political writing and her own personality as a social and political activist depends on showing good faith, even though the counterparts of the action or argument do not show any.

The making of a political activist

Ramazanoğlu was born Hacer Yıldız Ramazanoğlu in Ankara in 1958. Her family originates from the province of Kahramanmaraş and she is the second of three siblings. She was schooled at Ankara Girls' High School before she graduated from the School of Pharmacy at Hacettepe University.

Ramazanoğlu grew up in a conservative, nationalist family. Her grandfather was a very religious person who was known as Görşen Hafız ("hafız" is a Muslim scholar who has memorized the Quran) in Maraş. Her uncles supported the Republican Villager Nation Party (CKMP), which would later become the Nationalist Movement Party (MHP). Her father was a subscriber of the Tercüman daily, which was the mainstream newspaper for conservative circles.

Ramazanoğlu has said that her father was very kind to his children and was a supportive father. It is interesting that despite his conservativism he told his daughter that marriage was not a priority, and that she should develop her intellect first.

Ramazanoğlu says that she wrote her first piece, a little poem, in the third grade in order to challenge her teacher's discriminative behavior. Like some other Turkish elementary school teachers, her teacher treated pupils according to their families' social status. Hacer Yıldız was deeply hurt by this situation and tried to express her feelings in a poem.

However, Ramazanoğlu's writing as a child was greatly introverted. She used to write and keep it for her own enjoyment. I believe that this behavior has tracked the auto-affection in her mature work as well. Ramazanoğlu does not present the writer and reader as separate identities. Instead, she obliges the reader to sense the introvert emotions scattered through the text by the way of fusion.

Ramazanoğlu was a member of the board of directors at the Idealists Hearths, the youth branch of the Nationalist Movement Party. She met Burhan Kavuncu, then a young nationalist activist and writer. Kavuncu and Ramazanoğlu married and have two daughters.

Kavuncu was arrested and imprison in 1982, and he was not released until 1985. Meanwhile, like many others, Kavuncu declared that he left the nationalist movement. After Kavuncu was released from prison, the couple continued their political activities in Islamist circles. Both were also writing for periodicals.

The 1980s were the years of reformation for Islamists. Some of them were overtly political within the Welfare Party (RP) led by Necmettin Erbakan while many others were organized around religious community leaders.

A third option was also available, especially for intellectuals. Ramazanoğlu was not a party or religious community member. However, she joined in-home meetings with Islamist women and participated in protests and campaigns held for supporting the independence war in such Muslim countries as Palestine and Afghanistan. Finally, she was a significant part of the struggle against the headscarf ban applied by the military junta and associates.

Ramazanoğlu was also running a pharmacy while taking care of her two daughters and writing at the same time. She wrote political columns for periodicals and newspapers. Her main concern was discrimination against women. Although, Ramazanoğlu is not a feminist, she has been a part of the feminist movement in Turkey since the early 1990s. Similarly, she is not a liberal, yet she has had good relations and has worked together with the liberal intellectuals on many occasions.

Her family moved to Istanbul from Ankara where they began to run a pharmacy in the Fatih district. Ramazanoğlu started her delayed fiction-writing career in Istanbul. In 2002, her first collection of short stories, "Derin Siyah," was published. The book includes emotionally deep, moving and touching stories.

Ramazanoğlu also wrote a novel titled "İkna Odası" (Room of Persuasion) published in 2003 telling about the headscarf ban held by the Feb. 28 military junta at universities.

Ramazanoğlu says: "To write is an attempt to resist." All her writing can be summarized in that one sentence.
Last Update: February 02, 2020 22:20