Uthman ibn Affan: The calm before the storm 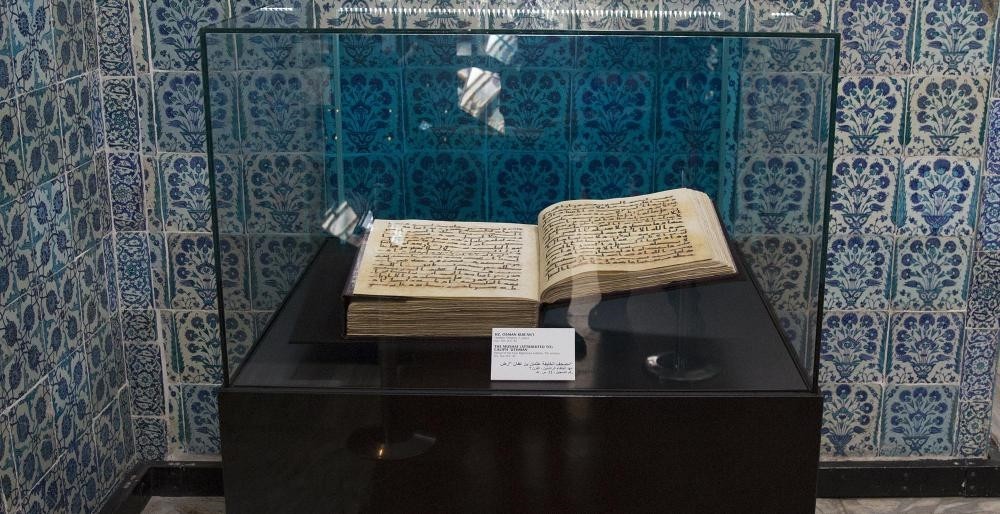 At Topkapu0131 Palace in Istanbul, there is a very old copy of the Quran that is referred to have belonged to Caliphate Uthman.
by Hakan Arslanbenzer
Oct 14, 2017 12:00 am

The cousin and son-in-law of Prophet Muhammad, Uthman bin Affan was the third caliphate and served Islam as he pioneered to produce a standard text version for the Quran, thus enabling the preservation of the holy book for centuries

The cousin and twice son-in-law to Prophet Muhammad, Uthman ibn Affan, was the third caliph, whose death marked the beginning of the political conflicts known as "the fitnah" (sedition). The breaking point did not come all at once, but became evident as rebels assassinated Uthman after a 20-day siege of his home. Uthman was also known as Dhu al-Nurayn, or the "possessor of two lights," meaning he married Rukayyah and after Rukayya's death, Umm Khultum, two of Prophet Muhammad's daughters.

After Uthman's death, Muslims fell into disarray, sometimes even fighting each other. As a result, Shiite and other Islamic sects arose during these conflicts. It is ironic that Uthman was actually a very mild person in nature and the only caliph to be selected from among and by his equals, individuals who later clashed after Uthman's death.

Uthman was born in Taif, Hejaz in 579 to a notable Quraysh family in the Banu Umayya tribe, ancestors of the Umayyad dynasty. His father Affan ibn Abi al-As was a very rich merchant who died very young, before Prophet Muhammad began calling his fellow people to Islam. Affan's mother Umm Hakim bint Abdul-Muttalib was the twin sister of Abdullah ibn Abdul-Muttalib, the father of Prophet Muhammad, making Uthman and Muhammad second cousins.

Uthman became a merchant like his father. Thanks to their family business and the large inheritance left by his father, he was among the wealthiest men in Hejaz.

Uthman was among the first Muslims. Abu Bakr took him to Prophet Muhammad, where he converted to Islam. Quraysh reacted strongly against Uthman's conversion because he was one of the prominent merchants of Hejaz. His uncle Hakem Abi al-As tied him up and tried to force him to denounce the new faith, but he resisted and his uncle untied and left him alone. After that, his mother took her turn, but she also gave in after seeing his devotion to Allah and Prophet Muhammad.

Uthman married Rukayyah, the daughter of the prophet. The couple migrated to Abynissia, now Ethiopia, in the fifth year of Islam in order to escape the oppression of the pagan leaders of Mecca. Uthman is also called Abu Abdullah for his son who was born in Abynissia and died soon after birth.

After his son's death, Uthman and his wife Rukayyah turned back to Mecca. However, they joined the hijra, a migration of all Muslims from Mecca to Medina in the year 622, the year accepted as year zero in the Islamic calendar.

As one of the richest merchants in Mecca and having amassed a considerable fortune, Uthman did not need any financial help from his Ansari brothers - Medina Muslims embracing the Muhajirun, the Meccan migrants - because he had brought his wealth with him to Medina. In Medina, Muslims were generally farmers and not very interested in trade, leaving most of the town's trading to the Jews. Thus, there was considerable space for Muslims in the trade sector. Uthman took advantage of this situation, quickly establishing himself as a trader in Medina. He worked hard and honestly, and his business flourished, making him one of the richest men in Medina.

A generous gesture for Ali

When Ali, the fourth caliphate, married Fatimah, Uthman bought Ali's shield for 500 dirhams ($50). Four hundred dirhams were set aside for Fatimah's mahr, or dowry, leaving 100 dirhams for all other expenses. Later, Uthman presented the armor back to Ali as a wedding present.

When Muslim men went to fight the Meccan pagans in Bader, Muhammad left Uthman with his sick wife Rukayyah, who died soon after the news of victory arrived in Medina. After the victory, Muhammad gave a share of the war booty to him.

Uthman acted as Prophet Muhammad's representative when the prophet went to war against the pagans. He also represented the prophet during the Hudaibiyya peace agreement with the Meccan pagans for the Muslim pilgrimage to Qaba.

Uthman was very close to the first two caliphs, Abu Bakr and Umar ibn al Khattab, and advised both after Prophet Muhammad's death. Umar ordered his fellow Muslims to form a council to elect his successor instead of nominating one. The famous "Council of Six," including Uthman and Ali, finally elected Uthman as the third caliph, which lasted 12 years until his assassination in 656.

Uthman, a merchant, made some quick economic reforms that helped trade in the Islamic lands flourish. As a result, Muslims enjoyed an economically prosperous life during his reign.

Uthman continued his predecessors' work on the Quran and commissioned a committee to produce a standard version of the text. Six copies of the standard text were produced and five of these were sent to major Muslim cities, while Uthman kept the last for himself in Medina.

Though having a pious, shy and humble character and having made Muslims richer, there was severe opposition of Uthman's rule. Some historians believe he was not strong enough to handle the opposition, while some others think he made several mistakes that angered the public, an argument that lacks proof.

Whatever the reason was, an armed opposition was formed against Uthman, and finally the rebels laid siege to his home. Uthman refused to use force against the rebels despite his cousin and governor of Damascus Muawiyya's aid offers. He also refused to leave Medina, the place he called "Muhammad's city."

The siege lasted 20 days. The rebels finally assassinated Uthman, which lead to turmoil in Muslim society. Muawiyya and Ali both declared their caliphates.

Uthman's body was buried secretly after some time by a few Muslims, most of them female family members.