Abu Bakr: A man of his word 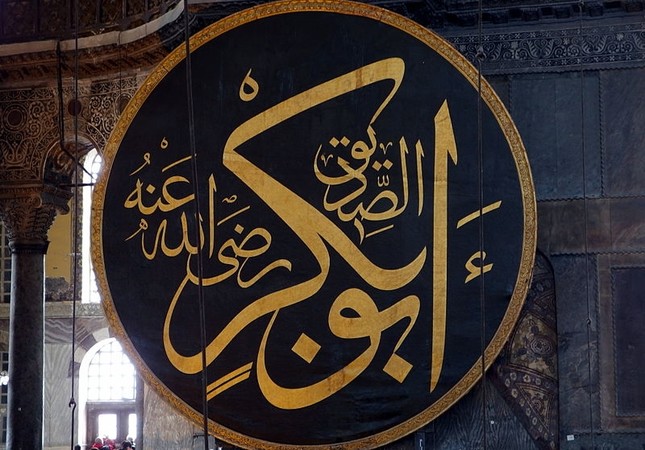 Known for his honest and frank character, the first caliph, Abu Bakr, was the closest friend of the prophet and served Islam by keeping Muslims together after Prophet Muhammad's death

Prophets alone bring new faiths. Yet, it's the disciples and friends who distinguish the new faith. Moses had his brother Aaron. Jesus had the 12 apostles. And, Muhammad had Rashidun (Great) caliphs, the first of whom was Abu Bakr, Muhammad's best friend and father-in-law.

Abu Bakr, also called al-Siddiq ("the Upright"), was born in 573 in Mecca as son of Abu Quhafa, a Quraishi of the Banu Taim clan. His mother Umm Khayr Salma bint Sahr used to call him "Atiq," which means good, noble and beautiful. Abu Bakr is said to have been always good to others. His name before Islam was Abdul-Kaba, which is inappropriate for Islamic beliefs, and the Prophet Muhammad changed his name to Abdullah.

Abu Bakr was called by several other names; however, al-Siddiq was the most popular one. Muslims continue calling him Abu Bakr al-Siddiq.

We don't know much about his childhood and youth. All we know is that he was a fabric merchant often visiting Yemen and Syria and had a great capital when he converted to Islam. He was one of the richest men of Mecca.

While Umar's conversion story was dramatic, Abu Bakr accepted the new faith at once. He heard that Muhammad was calling people to the new faith and decided to visit him. After the two met and talked, Abu Bakr left his friend's home as a Muslim. It's a tradition to accept Abu Bakr as the second convert to Islam after Hadija, the Prophet Muhammad's beloved wife.

Abu Bakr, being the closest companion and adviser to Muhammad, is marked by two events. First, the prophet married his daughter Aisha. Second, the two were together on the journey from Mecca to Medina, known as "the Hegira."

Abu Bakr was a true friend to the Prophet. When many people doubted what he said, Abu Bakr did not show any hesitation believing him. The holy Quran refers to Abu Bakr as "the second of the two" (9:40), meaning that he was the only person with Muhammad in the cave on the journey to Medina.

Abu Bakr used his riches as a tool for freeing Muslim slaves from their pagan masters, helping the poor and equipping the mujahedeen with weapons required for war. He worked as the treasurer of Islam.

He sat beside the prophet as he talked to notables of various clans visiting Mecca since he knew much about the genealogy of the clans and could make friends easily from those clans. In other words, he acted as a diplomat for Prophet Muhammad.

Beside those mentioned above, Muhammad in his last days asked him to lead the prayers at the mosque, which is considered a signal for his succeeding the prophet.

He served as the al-Amer al-Hajj, who controls the pilgrimage to Kaba in Mecca.

The Prophet Muhammad, who died in 632, did not choose a definite successor. So, Muslims themselves should decide whom to choose as their new leader after the Prophet's death. It's interesting that they chose Abu Bakr even before the body of the prophet Muhammad was washed and buried. Thus, Abu Bakr became al-Amer al-Muminun (leader of the believers), which later would be called "caliphate."

Abu Bakr's first action as caliph was to send the army to Syria under Usama ibn Zayd's command to suppress the rebel tribes of Hejaz and Najd. They were not arguing the singularity of Allah and Muhammad being Allah's messenger; however, they refused to pay zakat (a kind of Islamic almsgiving as a religious obligation for those who have a certain amount of property) and some other taxes to Medina. Abu Bakr defeated them and some other tribes who tried to return to their beliefs before Islam.

The tribes claimed that they had submitted to Muhammad and with Muhammad's death, they were free again. Abu Bakr insisted that they had not just submitted to a leader but joined the Muslim religious community of which he was the new head. Apostasy is a capital offense under traditional interpretations of Islamic law, and Abu Bakr declared war on the rebels. This was the start of the Ridda Wars, or the Wars of Apostasy. The severest struggle was the war with Ibn Habib al-Hanafi, known as "Musailimah the Liar," who claimed to be a prophet and Muhammad's true successor. The Muslim general Khalid bin Walid finally defeated al-Hanafi in the battle of Akraba.

I think Abu Bakr's impersonal interpretation of Islam is the core of the Sunni tradition. When Umar refused to believe in the Prophet's death, Abu Bakr warned him saying: "Whoever believed in Muhammad should be aware that Muhammad has died. And whoever believed in Allah should know that Allah is eternal." This simple but apparent view guided Muslims for centuries.

After the war against the rebels was won, Umar ibn al-Khattab offered caliph Abu Bakr to collect the pieces of the holy Quran together since many Muslims who had memorized the Quran from the lips of the prophet had died in battles. The record, when completed, was deposited with Hafsa bint Umar, daughter of Umar, and one of the wives of Muhammad. Later it became the basis of Uthman ibn Affan's definitive text of the Quran.

Abu Bakr died on Aug. 23, 634, in Medina. Shortly before his death, he urged the Muslim community to accept Umar ibn al-Khattab as his successor. The community did so, without serious incident.

Share on Facebook Share on Twitter
Previous in Portrait Lebanese police detained four suspects for attempting to sell a potentially... Next in Portrait Regarded as the first young man to ever convert to Islam, Ali ibn...
DAILY SABAH RECOMMENDS