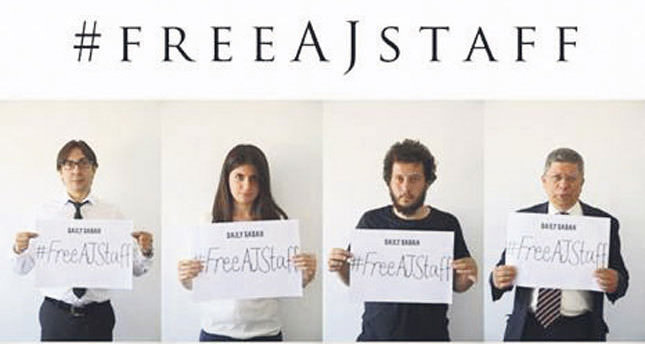 by İsmail Selim Eşsiz Jul 02, 2014 12:00 am
There was a time when people used envoys to plead their case to other people and kings when their ruler became tyrannical and broke feudal contracts. This allowed others to take claim on the cruel king's land. Things were similar in the Muslim world - people would ask prominent figures to argue their cases to the rulers in order to end their suffering. If the sultan refused to listen then the people would turn to other rulers to heed their calls for help. Nevertheless, the feudal era is long behind us, but when there is a tyrant or oppressive rule people of the oppressed country rely on the press to tell their miseries to the world. Likewise, the people of the world also count on the press to be informed on these unfortunate lands.

In those days, kings could send their soldiers dressed as bandits to prevent these envoys from getting to their destination. And today oppressive regimes do a similar thing under the disguise of "protecting national security". Especially in the Middle East, where everlasting conflict plagues the land, journalists tirelessly try to get some of the information to the rest of the world. They are doing so under the threat of oppressive regimes who accuse them of international espionage and threaten them with prison, and terrorists who swears to kill them on sight.

In one of our first issues, we voiced our concerns in the article titled, "Journalism is not a Crime", concerning the arrest of Al-Jazeera personnel in Egypt. The court has since reached a verdict for the three Al-Jazeera journalists whom were detained for months.Mohamed Fahmi and Peter Greste were sentenced to seven years in prison while Baher Mohamed was sentenced to 10 years. The international community found the ruling outrageous, and I would like to say that this is a grim blow to all journalists around the globe as well as journalism itself. Deputy Director of the Committee to Protect Journalists, Robert Mahoney said on the matter that ever since former President Mohamed Morsi was ousted, a total of 67 journalists have been detained. I will further quote him on the matter: "A lot have been let out, but today as we speak there are 14 journalists in jail in Egypt, including the three Al-Jazeera journalists. That makes Egypt the biggest jailer of journalists in the Arab world, more than Syria."

The International Press Institute (IPI) also released a statement on the matter and called on Egyptian President Abdel Fattah el-Sissi to release the jailed journalists using his powers of presidential pardon.

Yet the problems with the freedom of the press in the Middle East do not end with the jailed journalists in Egypt. One of the biggest violations of
press freedoms has been happening in Palestine and Israel ever since their conflict started. According to the annual report released in 2014 by The Palestinian Center for Development and Media Freedoms (MADA), there were a total of 229 violations in 2013 alone with 151 of them by Israel and 78 by Palestinian authorities. The report also stated that since 2008 the total number of violations reached 1,221.

Recent military operations by the Israeli army also showed that Palestinian media outlets are being targeted. According to Reporters Without Borders the Israeli army "doesn't hesitate to arrest, or even kill, news professionals."

With the constant state of crisis that this region is experiencing, it is critical that we have unbiased and continuous news and information in order to correctly assess various situations. I would like to remind everyone of this necessity. Even if journalists are arrested, or killed journalism is like the sword of Damocles to those who try to oppress it, for it is those in power who reap both the authority and danger of tyrannical rule–eventually, their day, too, will come.