Out with pitchforks, in with media 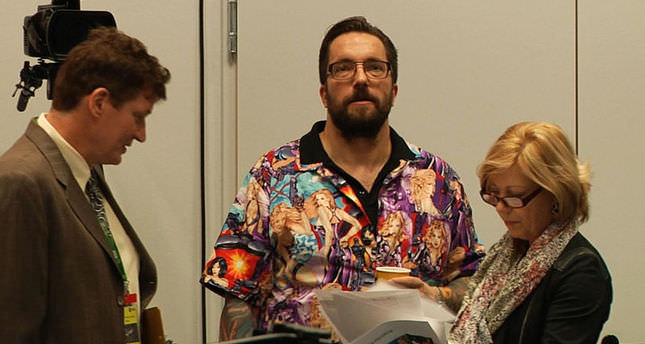 by İsmail Selim Eşsiz
Nov 24, 2014 12:00 am
Two weeks ago, a pinnacle in space exploration and research managed to grasp the world's attention. Scientists managed to land the Philae spacecraft on a comet after a 10-year-long mission that began with the launch of the Rosetta space probe by the European Space Agency. Thanks to the success of the mission, its probability and a capable PR office, both social and conventional media were very interested in its outcome and aftermath. Yet something happened during the final phase of the mission and it seems that it clouded the mission itself. Yes, I am talking about the shirt controversy.

Physicist Matt Taylor wore a shirt that featured comic book type women with guns and suggestive clothing during the live stream. At first, his eccentricity was commented on widely throughout social media, but those comments were followed by further comments on sexism. We are not to argue whether the shirt was sexist or the critics were only crying wolf. But I would like to point at the media's early behavior toward it and how it turned into a massive online mobbing and bullying that resulted in Taylor's tearful apology.

Initial articles only served to stir up more controversy and pressure Taylor. These articles simply criticized how a sexist shirt could be worn during an important live stream. Yet the same writers were the ones preaching – and rightfully so – how no one can be judged based on their looks or what they wear. After their bias was pointed out, the articles took a different turn. Now they claimed that "because of similar sexist behavior there is shortage of female scientists and because men like Taylor, science is such a hostile field for women." When we look at this claim and how it was presented, we can only see a disaster in a journalistic sense. First of all, these articles had no reports, no polls and no research on the issue of the lack of female scientists. Second, they mistook that even though the issue is much more diverse than a simple shirt and has many factors both socially and demographically, they only featured one case in order to support their argument. Not to mention painting a target on someone's back by treating him as a scapegoat.

The last mistake is more problematic I am afraid. They didn't even bother to feature any of the comments from either side. Had they only disregarded the side of Matt Taylor I would say it is biased and categorize it as a one-sided article, but they didn't even feature any comments from an actual woman in the field. From an outsider's perspective these news articles seemed to me to be a one-man podcast where the host has the only and final say on the matter.

Also, how the news of a shirt easily overtook the news coverage of a 10-year-long space mission that resulted with the landing of a spacecraft on a comet showed the media's weakness for scandalous and controversial news where they can enjoy the ratings and profit from further discussion by simply reporting on the discussion itself. After all, every tweet seems to have its own news article nowadays.

The shirt controversy showed us how easy journalism can become a tool for bullying, igniting a crowd and arming them with virtual pitchforks. I am afraid media is slowly starting to turn into the latest bogeyman – cyber bullies.