Struggle between departments of newsmaking 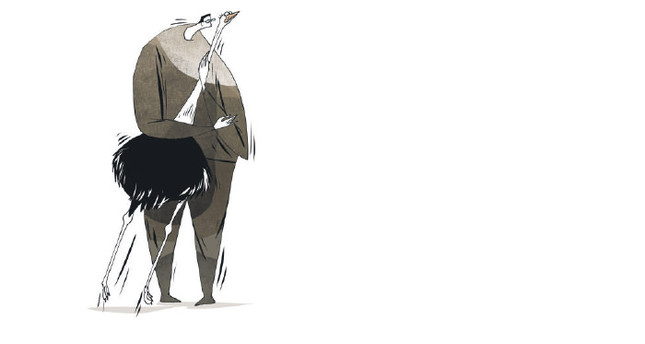 Editors, reporters, designers, web teams and photojournalists have different priorities and may seem like siblings always fighthing with each other to an outsider, but if moderated carefully, that fight can be the very thing that elevates the quality of the newspaper itself

You have probably seen an ostrich before. If not in person then at least in a photo or movie. They are quite different from other bird species in terms of appearance. They have a very long neck and two long legs and feet. Hypothetically, examining the news value of an ostrich from a journalist's point of view is hidden in its differences and sometimes editors fail to understand this nuance. To clarify, there is an inside joke among reporters poking fun at editors. The joke goes: "One day, an editor saw an ostrich. He criticized its legs and cut them short. The ostrich lost its ability to walk, but the editor also did not like the neck. After deciding the ostrich should not have such a long neck, the editor cut it and, of course, the bird died."

The underlying meaning of the joke is that sometimes because of an editor's excessive interference and desire to cut the story short, it becomes a news article without value or originality. In other words, the story dies.

Similar jokes are told about photojournalists, reporters, page editors and so on. It stems from a problem in sharing. For example, let's consider print newspapers. Apart from advertisers, a page is shared among the groups I mentioned above. A reporter writes the story; photojournalists provide the photos; editors edit, clean up and shorten the story where he or she sees fit and the designer combines their work together when designing a page.

Just like the society that it influences and informs, newspapers are also the product of a division of labor. This division is there for the individual parties to complete and support each other, but sometimes it can result in conflict. The number one priority for a designer is the appearance of the page. Based on the designer's own aesthetic sensibilities, he or she designs a template and fills in the content accordingly. For the reporter, the main concern is the text and seeing it printed as it was written without any contractions. The reporter does not really care about the appearance of the page itself. In fact, if it were up to them, they would fill all of it with walls of text and content. Photojournalists share the same mindset, but the only difference is that instead of text, their primary concern is photographs. This person wants more photos to be used and wants them to fill up the page. Because of these conflicts, it is still unclear who is the ultimate decider in this matter.

Actually, there is no need to declare one group as the sole decision-maker. Instead, it is important to maintain a balance between the content and appearance without letting either subtract space from the other. After all, apart from writing the story, it is important in journalism to present content so that it catches the reader's eye.

That being said, it is quite normal for either the text or the photos to occupy more space depending on the situation. This is an editorial choice as well, best exercised with great care and flexibility. There are times, for instance, when a text has to be printed exactly as it is in order to preserve the integrity of the report, and sometimes a well-prepared infographic can save you from writing pages. Sometimes a photograph can be the news report all on its own and tell the story better then hundreds of words. Therefore, the decision of which aspect to prioritize should be taken by all parties and editors should act as the moderators.

The process of both conflict and compromise is important to heightening internal competition. If we make sure no side can pacify the others and declare a monopoly on content and how it is presented, then this competition will improve the quality of the product. Unfortunately, it is not often that we see such an ideal workplace.

Let me give several examples of photos being mistakenly used:

- Photos are unique pieces. We must always give the name of the person who took it, the agency they work for (if any) such as Getty or Reuters as well as when and where it was taken. Both media ethics and copyright rules compel us in this matter.

- It is wrong to regard photos simply as an additional puzzle piece of the report. Besides being one of the key elements of reporting, it can also be a news report on its own and therefore, it is wrong to treat it as an accessory of the text.

- The integrity of a photo is a crucial part of its storytelling properties. Thus, just as we cannot add, remove or distort anything in a news article, the same applies to photos as well. Respect for the reader and photojournalist demands it.

- If we have a reasonable excuse to modify or edit a photo, "why" and "how" must be shared, even if the changes are related to something as simple as the framing or color correction.

- Unless it is done in order to protect the privacy of someone, we should not use "decouper" technique in photos. This separates the people or the event from the content and leaves an empty photo behind.

- Another problem damaging the integrity of photography is the act of relaying information by writing on the photo. It is often done by adding a label onto the photo with the names of the people photographed. A photograph's entire explanation is sometimes even written on it as well. It is unacceptable to allow text to cover photographs.

- There are instances where designers decide to invert the photos, but this also serves to distort the truth and is therefore unethical.

- Two or more people who never pose for a photo together should not be portrayed as being together by using computer-generated collages.

Today, the media is on a fast track to digitization, but this does not mean that the principles above do not apply anymore. Since speed gains more importance in breaking news, the same thing applies for ethics. Place or platform bears little difference when it comes to photographs and content. We have to stick with the truth. Otherwise, we cannot define our work as journalism.

And what about the advertisement revenue? Let me summarize. Compared to a year before, the advertisement sector had a 3.2 percent, or TL 3.967 million to TL 4.093 million TL ($1.755 million to 1.811 million), increase with revenues from websites included. However, the sad part is newspapers are in third place behind television and websites. And its revenues have decreased by 10.5 percent, or TL 653 million, from last year. In the same period ad revenues of websites have increased by 20.3 percent. We have to analyze these shifts and imagine new methods when determining publication strategy.