Painting a target on the Media's Back 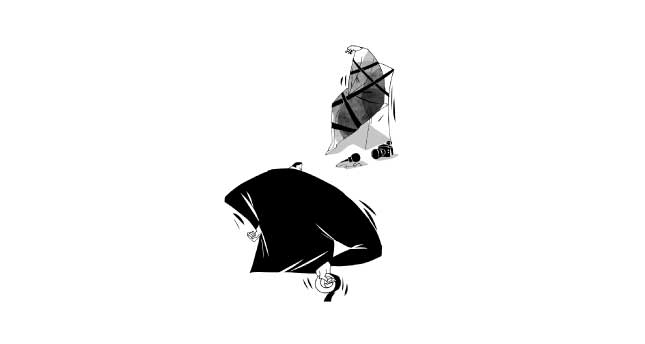 Tensions that have risen with the elections are very much able to produce an unhealthy atmosphere where the media is concerned, as the remarks made by Demirtaş during his party's latest rally have shown

Back on Oct. 6-8, 2014, 51 people were killed in Turkey. Those who were killed were not members of the Islamic State of Iraq and al-Sham (ISIS) or sympathizers, but the killers were allegedly close to either the PKK terror organization or its political branch, the Peoples' Democratic Party (HDP). Nevertheless, as the cases for those killings still continues in the courts, we cannot give any more details.

These incidents did not just pop out of nowhere of course. There was a prelude. One of the biggest factors that shaped and steered the situation was the ISIS siege of Kobani, Syria. In case you did not follow last year's goings on in the Middle East, Kobani is a region largely inhabited by Kurds and it was in the sphere of influence of the Democratic Union Party's (PYD) People's Protection Units (YPG), a sister organization of the PKK. The potential capture of the region by ISIS also meant that the PKK and other Kurdish movements had no choice but to relinquish control of the area. Kurdish refugees running to Turkey from ISIS were in the tens of thousands and they were placed in the Disaster and Emergency Management Agency (AFAD) camps assigned to them.

This ISIS advance put two actors in Turkey in quite a predicament, these actors being the PKK and HDP. In order to force Turkey's hand and have it interfere, they sparked a series of demonstrations and protests in the streets. HDP Co-Chair Selahattin Demirtaş was the first in line to light the flames of the demonstration by inviting people to protest in the streets. Sadly, the protests were not peaceful and became rather bloody in the process. PKK and HDP sympathizers orchestrated assassinations and killed people with different views that they encountered in the streets.

One of the victims of these mobs was Yasin Börü. He was only 16 during the attack and was a successful high school student. As schools were not in session on that day, he and a couple of his friends were partaking in nongovernmental organization (NGO) activities. More precisely, Börü and his friends were distributing food to the poor and those in need.

Three of Börü's friends who were present during the attack were Riyat Güneş, Ahmet Dakak and Hasan Gökoğuz. They were attacked by a large group in the streets. The group was armed with guns, axes and knives and these four people ran to a nearby apartment building for refuge. However, the attackers pursued Börü and his friends and eventually caught them. First there were knives. There were over 20 knife wounds on these four innocent young people. The attackers did not stop there. They threw the victims from the balcony of the apartment and dragged them in the streets, hacking at them with axes while doing so. The mothers of Börü and his friends were unable to identify the bodies because of the intensity and violence of the attack.

Thus the events continued to escalate and Demirtaş made one of the hardest public appearances in his life. While sweating profusely he asked people to end this so-called protest.

A case of editorial independence

The same Demirtaş was on stage two days ago. During his speech at a rally his party organized, he was swinging Sabah, Yeni Şafak, Takvim, Star, Akşam and Güneş newspapers at supporters. He deemed the aforementioned newspapers as rags and tatters and crushed them one by one and threw them on the ground.

The reason for Demirtaş's actions was that a day before this speech, his party held another rally in Diyarbakır, a city in the southeast. There were two bomb attacks at this rally that claimed the lives of four innocent people and injured over a hundred. Demirtaş claimed that the bombing was not featured on the front pages of the aforementioned newspapers and proceeded as we said above. However, this claim was false, as three of those newspapers indeed featured this news on their front pages. The size of the news article might not be as big as Demirtaş would have preferred, but the reason for this was the press schedule of the newspapers, not censorship toward the news article.

Let's make something clear first. The bombing of the HDP's Diyarbakır rally was an attack on our democracy. Just like every other citizen of Turkey, it wounded us deeply. We mourn the victims, offer our condolences to their loved ones and pray for the hasty recovery of those wounded in the attack. We expect the authorities to investigate the attack and catch those responsible as soon as possible. But we have to ask, whatever the reasons may be, can a leader of a political party interfere with the editorial independence of newspapers?

Secondly, we have to reiterate the ethical rules that newspapers should follow when covering terrorism attacks. It is mostly common knowledge now that the purpose of terrorism is to spread terror and despair while producing or provoking social conflicts. They can achieve that goal by manipulating the media. For a single terrorist or a terrorist organization, media coverage of the attack is much more important than the attack itself. Knowing that is the present situation, covering terrorism with responsible broadcasting is an ethical necessity. That can be done by not overrating and dramatizing, not relaying uncertain information and by not agitating the situation.

Just like politicians, the media must act responsibly in the face of terror attacks and try to extinguish the fire instead of fanning it by soothing the public rather that provoking them. Demirtaş's remarks are hypocritical and far from responsible. After all, nearly all newspapers from that day featured the attack in a similar sized news article. But Demirtaş only chose to put some of them in the spotlight – the newspapers that do not support him. This action was divisive and far from impartial.

Similarly, in his remarks, Demirtaş has the potential of causing dangerous consequences. Like the Oct. 6-8 events, If PKK and HDP sympathizers conduct terror attacks on these media organizations and journalists who work there, the agitator and instigator of these attacks would be Demirtaş.

Demirtaş's remarks are aimed to damage the independence of the press. If a politician paints a target on the media's back, that is a threat to the safety of the journalists and this action threatens journalists in order to scare and silence them. All national and international journalism and human rights organizations should condemn his action and remark while defending the rights of their colleagues.
Last Update: Jun 08, 2015 1:20 am
RELATED TOPICS