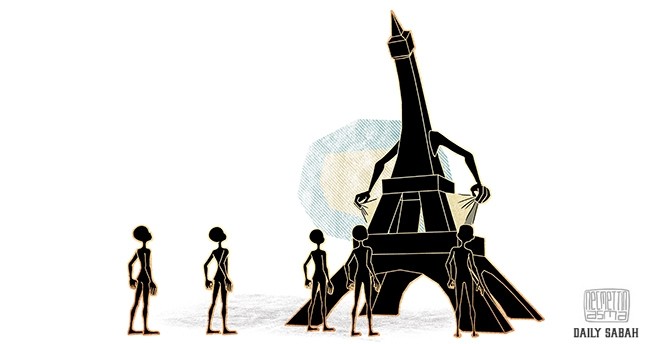 Illustration by Necmettin Asma - twitter.com/necmettinasma
by İbrahim Altay Jun 06, 2016 12:00 am
The words "liberty, equality and fraternity," which expresses the sentiments that sparked the French Revolution, is the current national motto of France. Yet despite continuing to profess these principles as the founding values of the country, the current state of France is disconcerting.

The people of France have maintained alignment with their revolutionary roots, as evidenced by the latest string of protests and strikes over proposed changes to the labor law. Yet, the inability or unwillingness of the government to budge regarding the laws shows us that they are choosing different roots to cling to – perhaps those of Louis XVI?

The movement that refers to itself as "Nuit debout," meaning, "Rise up at night," started at the end of March as a reaction to proposed changes to France's labor law. While these legislative changes are known as the El Khomri law (named after labor minister Myriam El Khomri), most of the media referred to them as labor reforms. Thus, our first point for this article.

Let's review the meaning of the word reform. It means to make changes to improve something or someone by removing faults, corruptions or problems. For something to be called a reform, a clear improvement is expected. But would this El Khomri law be an improvement? Well, a large number of French people seem to think otherwise. When we look at the law itself, we see that the most controversial points include reducing payments for overtime, reducing severance payments and allowing companies to lay off workers more easily. This doesn't look like an improvement, particularly with regard to labor or -- in other words -- workers. This means that we have two sides: The French government asserts that these legal changes would be a reform, while the other side, the protesters, argue just the opposite with strikes, demonstrations and protests. Yet over the course of protesting, the media has quite freely used the phrase "labor reforms." Doesn't this demonstrate a lapse in objectivity where we selectively use one side's rhetoric? Especially when one considers this law cannot easily be described as a reform. I am also sad to admit that Daily Sabah used the same term when it came to reporting on the issue in at least three different articles. The only redeeming fact is that all three of the articles came from outside news agencies, such as AFP or the Associated Press.

More than a word

You might be thinking we are merely dealing in semantics, but this has been symptomatic of the media's stance towards these protests. Even though Western mainstream media are first to arrive when a country they deem "undemocratic" is undergoing protests, when the country in question sits in the middle of Europe, they choose instead to opt for a media blackout, regardless of how violent the police intervention during the protests. In an endless cycle that ignores and discredits the protest movement, the media has carefully chosen the moments they will cover and selected moments that will paint the protesters in a bad light, while disregarding the goals of the movement or the police brutality that it faces. The violence of the protesters and the police are seen in the daily stream of the news, but if media chooses to air them out of proportion to their actual frequency, we have evidence of clear bias.

As we said above, the bias in this case was twofold, the first being the bias against the protesters in favor of the government and the police. The second bias spreads across a wider timetable. Playing pick and choose with countries that undergo protests appears to be the modus operandi for Western media, and this damages not only the countries they choose to cover, but also the protesters from the countries they choose to ignore, as they are left bereft of media coverage. A recent example is Germany's Der Spiegel. During the Gezi protests in Turkey, the magazine chose a headline of "Do Not Bow" (Beugt Euch Nicht). This time, however, they chose the headline "The Unconquered Beauty" (Die Unbesiegte Schönheit), accompanied by a peaceful picture of Paris that ignores the chaos and violence.

When dealing with violence, however, it isn't enough to shield oneself or simply turn a blind eye. Attacks by French police forces against members of the media have been increasingly seen, as the police show disregard for press badges or helmets.

For example, let's look at May 1, known in France as La Fête du Travail or Labor Day. A cluster of journalists stood between police and the protesters with their cameras. They had an unobstructed line of sight with the police to avoid being treated as protesters, but alas a stun grenade fell like a mortar shell and exploded over the heads of the journalists, sending them running from the police. Stun grenades were followed by tear gas, and another video showed a French reporter falling down unconscious with blood pouring from his head.

Sometimes the threat of violence seems to serve the police better, as we saw during the protests in Rennes when two armored policeman surrounded a photojournalist. They forced him to delete his photos and continued to harass any journalists who tried to record the interaction. A more recent video shows police manhandling and throwing a journalist, while other journalists plead with the police, saying, "S'il vous plait!" (Please!)

Another disturbing report came from Reporters Without Borders (RSF), which "accused the General Directorate for Internal Security (DGSI) of illegally deploying undercover officers disguised as journalists during the April 14 protests, some of them wearing helmets or armbands with the word 'Press'." In other words, police abused the neutral stance of journalists to achieve their goals, something akin to being disguised as medics to infiltrate the trenches of the enemy. Both are violations of the police code of ethics.

Even the RSF, as an international press freedom watchdog, has been vocal about police brutality against journalists during the protests raging across France, and they said that police had opened fire on journalists with teargas grenades and rubber bullets. Yet one of the most violent threats against journalism so far in 2016 seems to go unmarked, despite condemnation from the RSF. Numerous press watchdog organizations have either ignored the matter or glanced over it out of obligation not responsibility. With a simple Google search, our readers can review the current situation in the media for themselves, since at the time this article was written blogs and individual initiatives were the majority of media that covered the violence in France, while links from mainstream media could be described best as infrequent. Media coverage has been so casual that protesters found it necessary to form their own alternative media channels, making use of services such as YouTube or Periscope.

Violence against protesters and journalists is unacceptable, regardless of the country where it occurs. This hypocrisy employed by mainstream Western media and international media watchdogs has two negative outcomes. By showing clear bias, they lose their ability to influence or convince those countries they decide to cover. As for countries that get a free pass, it is clear that the police forces of said countries are quite aware of their free rein and show no restraint, even when dealing with members of the press. What they would do without cameras present, we can only speculate. But one thing we can be thankful for is that nowadays, everyone has a camera in their pocket and the ability to upload footage in mere minutes.

Since this week's subject has been media coverage of protests and police brutality, we can't help but remember a similar event that occurred from December 2013 to January 2014. Dubbed the Hamburg Protests, it all started with the Rote Flora building, also known as the Tivoli Theater back in the day, that was active until 1964 either as a theater or a cinema. However, the decision to redevelop Rote Flora sparked demonstrations that raged for more than a month until the city had to announce a change in its plans.

While it can be summarized easily in a paragraph, the actual confrontation between police and protesters left much need for footnotes, as the police brutality shocked both the residents of the country and the international community.

Another thing to note are certain similarities between the Hamburg Protests and the Emek Protests in Turkey. Emek Cinema was a prominent site in İstanbul's history, as the go-to venue for galas, film festivals and cultural activities up until the last decade. The reconstruction of the Cercle d'Orient building and Emek Cinema led to protests in İstanbul that included clashes with the police.

However, even though both events had similarities in their starting points as well as the problems surrounding them, the coverage each event got could not be further apart. While the Hamburg protestors were demonized and emphasis given to the damages they caused, police brutality was swept under the rug until it became impossible to do so. Yet over the course of the protests most of the media stayed silent both locally and internationally, allowing the police free rein. The difference in approach to these two similar protests shows a clear bias, and we can only urge our colleagues to give protests and protestors equal representation and standing regardless of their country of origin.