The latest image of a childhood lost to war 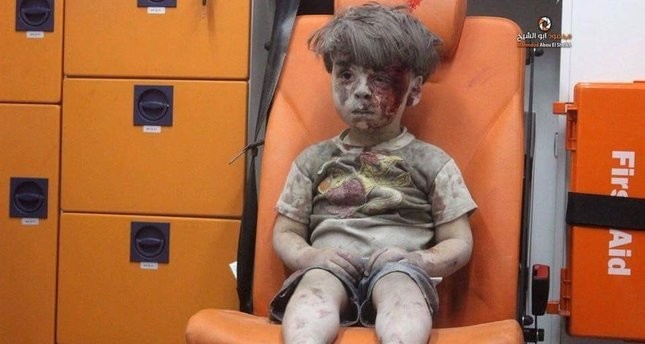 by İsmail Selim Eşsiz Aug 22, 2016 12:00 am
As we continue to witness the biggest humanitarian crisis of the 21st century, the public's waning interest in the Syrian civil war and ensuing migrant crisis is a light that continues to fade. While the recent image of a young Syrian boy who was rescued from the rubble of a bombed out building has sparked the public's interest yet again, when I look at this photo my mind wanders to an image that brought similar reactions one year ago. Syrian refugees risk their lives to escape their war-torn homes in Syria, attempting to cross the Aegean Sea in hopes of gaining asylum in Europe through both legal and illegal means. Despite the number of boats that were sinking and the rising death toll in the migrant crisis, it wasn't until Doğan News Agency correspondent and photographer Nilufer Demir took a photo of three-year-old Ayman Kurdi's lifeless body after he drowned that the world woke up. The day after the photo was taken, it appeared on the front pages of many newspapers around the world. That single photo managed to garner a widespread response, capturing international attention from the media and the general public, where hundreds of previous reports on the misery of Syrian refugees had gone unnoticed.

Reader's Corner published an extensive article on the subject by İbrahim Altay, titled "Shattering the world's indifference with a single photo" which was published on Sept. 7, 2015.

Almost exactly one year later, we have another boy who is making headlines, named Omran Daqneesh. While his exact age is unknown, he is likely not much older than Ayman Kurdi. A still taken from a video in Aleppo introduced Omran to the world, from his seat in an ambulance where he looks into the camera after being injured during an airstrike that took place on Aug. 17. The video was posted by the Aleppo Media Center.

The image of Omran, who sat in shock, covered in dust and dried blood, dominated the airways of media outlets worldwide. The image first went viral on social media and began to be featured in top stories in mainstream media.

It appears that, once again, a single image has managed to get a more poignant point across than years worth of reports on the tragedy in Syria could. As the world began to forget about the Syrian crisis, a single photograph has managed to grab international attention once again. But we must ask ourselves, what comes next? Will people realize once again that even if it happens far away from their sight, this tragedy is very real? Or, will they continue to push such images into the back of their minds as newspapers draw mention to it once in a blue moon?

The people of Syria have expressed befuddlement at the international shock that was caused by the sight of Omar; they are no stranger to such images. After all, they see dozens of children like Omar every day as the civil war rages on. More than 4,000 children have been killed in Aleppo since the civil war began, according to the Syrian Observatory for Human Rights.

It is also important to remember that while images are powerful, they lose that power with overuse. The frequent images of such a humanitarian travesty lead people to become desensitized, diminishing the effectiveness of such images in resolving the crisis. But who knows, perhaps this photo of little Omran, like that of the small boy whose body lay lifeless on a Turkish beach, will be the wakeup call that viewers need and lead to a public outcry against the tragedy. After all, it is desperately needed.
RELATED TOPICS