Calling 'Islamophobia' what it is: Anti-Muslim 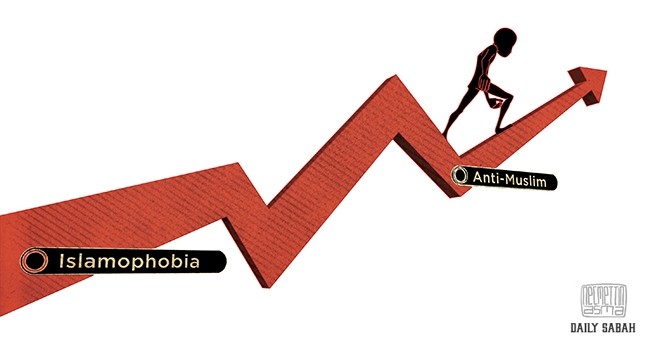 As anti-Muslim tendencies in the Western world continue to worsen, calling the situation Islamophobia no longer suffices as it fails to emphasize or define the alarming severity of the situation correctly

In her book "On the Muslim Question," Professor Anne Norton says that the Jewish question shaped the 19th century and that now the Muslim question has replaced it in our century. The book most likely draws on an essay of Karl Marx, "On the Jewish Question," and introduces a new chapter on the current situation. After all, Jews were seen as a plague-stricken people in the past by the general populace until the 20th century. They were rejected by other societies, spat upon, banished, ostracized, killed, pushed around, discriminated against and in the end suffered a horrific genocide. If one says that 20th-century Jews have been replaced by Muslims in the 21st century, this bears much investigation, since it is a most serious claim.

Some Western thinkers make the optimistic claim that Western societies have evolved into politically correct and post-racial societies, but recent events around the world, along with the tears and blood being shed at an alarming rate, prove this claim to be false.

Food for thought: Since 2001, as close as the new millennium, nearly 300 mosques in Europe have been burned down by arsonists. The number of Muslims who have fallen victim to murder is increasing. Just as in the NSU case in Germany, some of these murders also featured gross negligence by government agencies. Support and votes for political parties and leaders that are well known for their racist statements and policies has increased quite rapidly since the last elections. Immigrant countries, such as Syria or Iraq, are becoming common figures in European cities, instigating firstly xenophobia and secondly anti-Muslim sentiments.

Therefore, the results of a survey conducted by Chatham House on "What Do Europeans Think About Muslim Immigration?" did not provide any surprise, only dismay:

During the survey, people were asked whether they agree, disagree or neither agree nor disagree with the statement, "All further migration from mainly Muslim countries should be stopped." The survey was carried out in 10 European states with over 10,000 people. In these 10 countries, an average of 55 percent agreed with stopping all further migration mainly from Muslim countries. It was not an even split between agree and disagree, however. Only 20 percent disagreed about stopping immigration, while 25 percent opted to abstain.

Age seems to be one of the main determining factors for the answers given in the survey, as Chatham House researchers stated, "Those aged below 30 are notably less opposed," while the older demographic leaned more toward stopping immigration. Another important factor was education, as "less than half of all degree holders supported further migration curbs."

As a final note, let us say that during the survey, the countries with the highest percentage for the "agree" option "have either been at the center of the refugee crisis or experienced terrorist attacks in recent years." Not to mention that those countries also faced a radical right group as a viable political force that has been putting Muslims in the crosshairs for a gain in the ballot box.

Just like every other newspaper, academic study or political statement, we have been using Islamophobia when talking about worry, anger or hate toward Muslim populations. If we search for the origin of Islamophobia, three important events stand out in recent history.

For the first historical event, let us look at Iran. With the Islamic Revolution, also known as the Iranian Revolution, in 1979, Iran was torn away from the West and has since been considered only a satellite state of the West.

The second is another significant milestone in recent history: The fall of the Berlin Wall in 1989. With the dissolution of the Soviet Union, we awoke to a unipolar world. This led some politicians and think tanks in the West, with those from United States chief among them, to search for a new "enemy," or in more sociological terms, a new "other." They chose Islam as this new enemy, as the new other. Here, Huntington's "The Clash of Civilizations" theory provided the ideological groundwork for presenting Islam as a potential enemy for the West.

The third and final one is an event most likely still fresh in our minds even after more than a decade. Of course, I am talking about the terrorist attack on the World Trade Center on Sept. 11, 2001, more commonly referred to as the 9/11 attacks. In the aftermath, the fragile atmosphere following the attacks was used to sow the fear of Islam in the minds of Western societies by politicians and the media.

On top of these three events, we can add the following as well. The invasions following the 9/11 attacks and the rebellions that started during events dubbed as the Arab Spring caused the situations in the countries where Muslims live to deteriorate with wars and instability. All these paved the way for a breeding ground for radical organizations. Terrorist organizations, such as al-Qaeda and Daesh, all played a major role to provide justification for Islamophobia.

The colonialist efforts and demand for cheap labor, led to migration of Muslims to the West which in turn provided constant contact between Muslims and Christians. However, since most of this Muslim demographic worked in the service sector, living in ghettos because of their low income, it is not possible to say that relations with Christians was based on equality. Also, the Muslim demographic that did not return to the countries of origin but stayed in the West was seen as a burden, a source of conflict and a community in need of transformation. This complicated issue must be considered as another factor that boosted Islamophobia and other anti-Muslim tendencies.

Today, Muslims are faced with systematic injustices in almost every Western country. Defining the current situation with the term Islamophobia can no longer be considered sufficient. Phobia roughly means irrational fear and presenting a religion as the source of this fear is not consistent, neither logically nor scientifically. Not to mention that this term also sets a basis for discrimination and enmity toward Muslims as a psychological pathology, somewhat excusing those who possess the related problematic behaviors and actions.

Also, it gives the illusion that this "phobia" targets a religion and system of thought, concealing the fact that it also targets real people and societies. In other words, this term hides the humanitarian aspect of the issue.

Therefore, as the ombudsman of Daily Sabah, I suggest that we use the term anti-Muslim instead of Islamophobia from this point onward.
Last Update: Feb 13, 2017 1:23 am
RELATED TOPICS