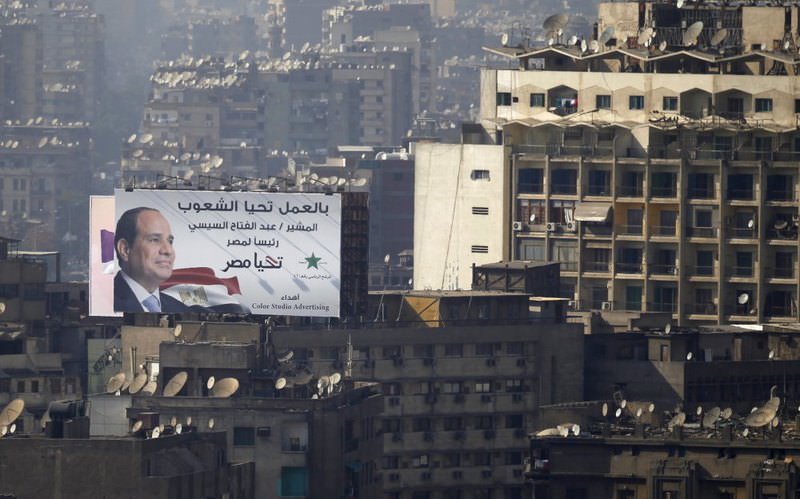 An election campaign billboard of presidential candidate and former army chief Abdel Fattah al-Sissi is seen on top of a building in Cairo, alongside narrow houses and factories.
by Oct 10, 2015 12:00 am

The project, a pillar of Egyptian President al-Sisi's election campaign, has stalled, possibly risking his reputation and highlighting Egypt's habit of promising grandiose ventures and then struggling to deliver

When Abu Dhabi-run contractor Arabtec signed a deal with the Egyptian government for a high-profile housing project it was seen as a sign of the Gulf Arab state's support for President Abdel Fattah al-Sissi.

But the project announced in March 2014 and a pillar of Sissi's election campaign, has stalled, possibly risking his reputation and highlighting Egypt's habit of promising grandiose ventures and then struggling to deliver.

Egyptians were promised one million homes by 2020 at a cost of about 280 billion Egyptian pounds ($35.76 billion) and a raft of other projects to help the economy get back on its feet after the political upheaval that followed the 2011 uprising.

Sissi was counting on billions of dollars in pledges of help from Gulf Arab oil-producing allies, backers of the army's overthrow of President Mohamed Mursi of the Muslim Brotherhood in 2013. Some of which this money has failed to materialise, and local banks are unable to finance the Arabtec project. "Egyptians want these projects now but in fact they will take years to finish," said a Western diplomat in Cairo. Egypt signed a memorandum of understanding for the project with Dubai-based Arabtec, which built the world's tallest building, the Burj Khalifa for Emaar Properties, but now it has ground to a halt. A source familiar with the matter pointed to disagreements over the contract and funding difficulties.

Work has not started and Arabtec has yet to submit a building plan.

The UAE is still deeply committed to Sissi but when it comes to commercial ventures it is paying closer attention to contract details for a good return on investment, Western diplomats say.

Sissi's success in cracking down on the Muslim Brotherhood - seen by Gulf allies as an existential threat - may mean the UAE has less reason to engage in ventures to back him. UAE finances have also been hurt by a fall in oil prices. Sissi's performance on the economy is coming under greater scrutiny. "At the moment, many ordinary Egyptians will want to see results in economic terms," said H.A. Hellyer, nonresident fellow at the Brookings Centre for Middle East Policy. "If the results are not sufficiently big or don't come quickly enough, be it on the Arabtec deal, the new administrative capital, or the Suez Canal expansion, Sissi's popularity could suffer quite substantially as a result."

At an investment conference in March, Sissi said UAE businessmen Mohamed Alabbar, through Abu Dhabi investment firm Capital City Partners, would lead the construction of a new administrative capital. This would include an airport larger than London's Heathrow and a building taller than Paris's Eiffel Tower. Nearly four months after the initial memorandum of understanding was signed with Alabbar, Egypt's investment minister said that his company would only take "part of the project" along with other investors, including China Construction, which signed a memorandum of understanding of its own to study "building and financing" part of the project.

In another example of the difficulties faced by these projects, a year after announcing it would build Egypt's first coal-fired power station, Abu Dhabi-based Al Nowais Investments said last month the paperwork still had to be finalized.

"I don't think the UAE is pulling out, but UAE companies who tried to jump on the bandwagon are finding it difficult to fulfill commitments that were not planned well," said Mohammed Ali Yasin, managing director at NBAD Securities, the stockbrokerage arm of National Bank of Abu Dhabi.

On the Arabtec deal, the parties disagree on profit sharing terms, the government's return for providing the land and state insistence labour and materials be sourced mostly locally for a project that will provide very thin margins, said Allen Sandeep, director of research at Naeem Holdings in Cairo.

It is unclear whether Egypt was swept up in the ambitions of Arabtec's ex-CEO Ismaik, who promised in June 2014 to make Arabtec one of the top 10 companies globally by 2018. Ismaik resigned a week later.

Khadem Abdulla al-Qubaisi, considered a close ally of Ismaik, has also left his roles as chairman of Arabtec and managing director of Aabar's parent firm International Petroleum Investment Co. It is unclear whether his departure is a signal of Abu Dhabi's waning support for the builder.

A source at Egypt's housing ministry said it was still waiting for Arabtec, which has posted losses for the past three quarters, to submit a workable plan detailing how it will build 100,000 homes over five years and the parties have yet to agree when work will start.

Arabtec also does not have the cash to fund the project costs upfront - its cash and cash equivalents were 296 million dirhams ($80.59 million) in arrears as of June 30 according to its most recent earnings statement. Financing from Egyptian banks is unlikely due to insufficient liquidity in the banking system.

Though the Suez Canal extension was raised through a local investment certificate, analysts say this type of fundraising, which drew on nationalist sentiment to encourage scores of Egyptians to buy up certificates, is unlikely to be repeated. Angus Blair, head of Signet economic forecasting, questioned the wisdom of megaprojects.

"There have to be other solutions to grow the economy - it's one of the parts that could be played as an economic vision but these projects and programs have to be really well thought through so there is maximization of value and long term sustainability," he said.