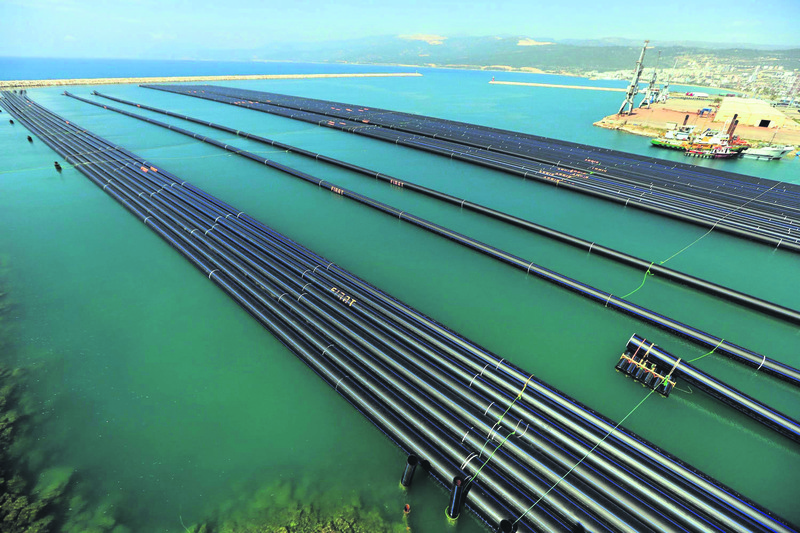 The Northern Cyprus Water Supply project, which has already affected land prices, is expected to have an even greater impact on agriculture and tourism and increase the productivity and the value of the island's land

Land prices in Turkish Cyprus have tripled since new pipelines started to deliver water to the island from Turkey. The Northern Cyprus Water Supply project, as it is officially known, started to supply drinking and irrigation water to Turkish Cyprus last week. Having been on Turkey's agenda since the 1990s, the project, which kicked off in 2011, will provide sufficient amounts of water for 30 years. To transfer water, an underwater pipeline was established to connect Turkey to Turkish Cyprus. Each year, 75 million cubic meters of water will be supplied from Anamur's Dragon Stream to the Geçitköy Dam located near Girne. Half of the supplied water will be used as drinking water, while the other half will be used for irrigation.

The project has already begun to prove its efficiency just one week after its launch. The reviving impact on the economy is even clearer in terms of tourism, agriculture, real estate and industry. Land prices have already tripled and are expected to increase 300 percent over the next two years.

Thanks to the project, the regions of Mesarya and Güzelyurt, on which agriculture without irrigation system, will be converted into the agricultural stocks of the island. The project is also expected to convert Mesarya, Güzelyurt and Bafra Island into new regions for tourism, and investments in Turkish Cyprus tourism are expected to double over the next three years. Since the project will increase the amount of agricultural land from 1,977 acres to 9,884 acres, it will notably increase agricultural employment and likely make the island 50 percent more productive and self-sufficient - decreasing the need for imports.

Deniz Kürşat, a real estate agent working in Turkish Cyprus, verified the increase in land prices in Mesarya and Güzelyurt because of the project, saying that it can mostly be attributed to the expected increase in agriculture. Kürşat also explained the expected rise in the tourism sector by saying that hotels were responsible for decontaminating water, requiring them to allocate a large amount of money that can now be used for more efficient investments in the sector.

The Association of Cypriot Turkish Industrialists Chairman Ali Çıralı stressed that most imports are food and agricultural products. Çıralı added that the project, which is expected to increase agricultural productivity by 50 percent, would notably decrease the dependency on imports.

Bünyamin Yüksekbaş, a member of the board of directors of Yüksekbaş Group, which operates in the food, trade, construction and service sectors, underlined that the project will be an important contributor to agricultural employment, stressing the project will help agriculture to become one of the most important income sources along with education and tourism. Another Yüksekbaş Group board member, Sabih Can Yüksekbaş, said the project would greatly increase productivity, making the island a source of agriculture and livestock products. Sabih Can Yüksekbaş also reiterated that Cyprus has been in need of water for many years, which is why it could not efficiently support agriculture.

Additionally, 25,000 families currently work in agriculture on the island. However, this number is expected to increase by 40 percent. Experts claim this increase is realistic, considering the fact that the island is not chemically contaminated; therefore, it is not infertile and the island has large potential for the supply side of the agricultural sector. As a result, this clearly shows that agriculture and its related employment will rise due to the project.
RELATED TOPICS