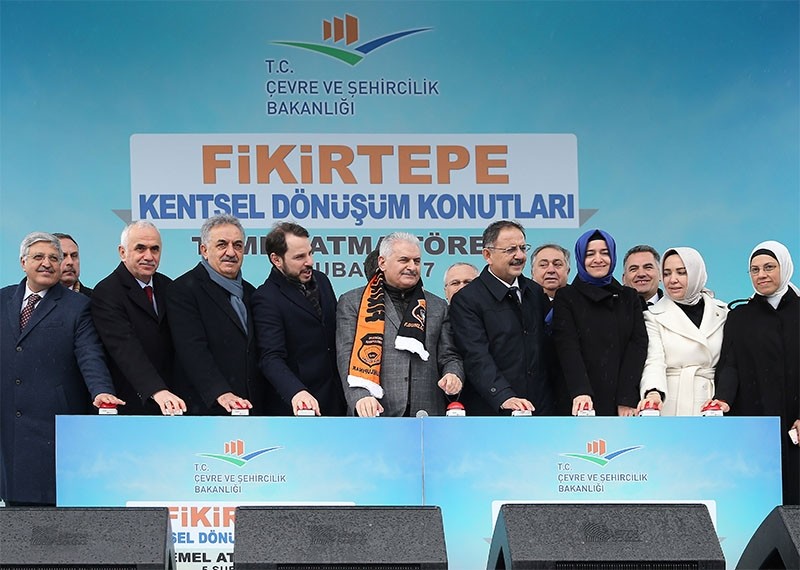 With the Fikirtepe Urban Tranformation Project in Istanbul, a symbol of urban transformation projects in the country, Turkey demonstrates a strong public-private partnership, changing the entire face of a long-forgotten district full of squatter houses

Prime Minister Binali Yıldırım has launched construction projects across 13 city blocks as well as the demolition process of two other city blocks in the Istanbul district of Fikirtepe, one of the biggest stages of the urban transformation project with a cost of $18 billion which includes the development of 10,269 independent units including 9,189 residences, 571workplaces and 509 offices are being planned to be built.Announced in 2010 by Istanbul Mayor Kadir Topbaş, the Fikirtepe Urban Transformation project is the most iconic of Turkey's urban transformation projects. Although it was previously delayed due to problems in agreement among Fikirtepe residents and bureaucratic red tape, the project was finally initiated by Prime Minister Yıldırım on Sunday.

With more than 20 private construction companies participating in the project in partnership with the Ministry of Environment and Urbanization, the project is likely to be one of the most important private-public partnerships in decades.

Emphasizing that the urban transformation projects are one of the important actions the Justice and Development Party (AK Party) has taken, Yıldırım said that when they took office in 2002, one of the most important issues facing Turkey was the need for residences and housing.

Emphasizing that they have launched extensive mobilization for housing, Yıldırım said that the government has completed a number of housing projects in every corner of Turkey in record time.

The prime minister noted that the AK Party's commitment to both mass housing projects and urban transformation projects continue. Yıldırım said that with every new project that has been founded and launched, jobs and the incomes of the Turkish citizens are positively affected, improving quality of life standards and boosting the country's housing and urban development sector, adding that Fikirtepe residents are now witnessing one of the most beautiful examples of this in modern history. "Our primary duty is to increase the quality of life of our people and raise the living standards of our cities. With every investment, we provide business opportunities and new employment areas," Yıldırım said. "With these giant projects, we not only build on today or tomorrow but we also secure the future of our country."Prime Minister Yıldırım said that more than 10,000 houses will be built in the area and 35,000 houses will be constructed in Fikirtepe. Recalling that up until today Turkey has built thousands

of houses across Turkey thanks to private firms and the Housing Development Administration of Turkey (TOKİ), turning Turkish cities into liveable areas and creating city brands.

The RFID (Radio-Frequency Identification) system, one of the most important measures taken in order to increase the durability of residential buildings in the case of an earthquake or other natural disaster, will commence In Fikirtepe, the foundations will be laid with a chip concrete coating system, which is currently being implemented as a pilot program in the select cities of Afyonkarahisar, Karaman and Düzce. The system, which will start to be implemented in March across 81 provinces, will be put into practice in another province for the first time by Prime Minister Yıldırım. The chip concretes to be used in the projects will ensure that all the stages of the construction are spontaneously controlled. Fikirtepe and its surrounding areas were first identified for the urban transformation project by the Istanbul Metropolitan Municipal Assembly back in 2007.

After Fikirtepe was declared a risky area, agreement rates with property holders skyrocketed after the relevant institutions and organizations contributed to the project in coordination with the Ministry of Environment and Urban Planning. In general, the agreement rate between entities and contractors reached 90 percent. Construction licenses for 20 out of 28 city blocks, in which 100 percent agreement rate is provided, have been completed so far.
Last Update: Feb 06, 2017 8:39 am
RELATED TOPICS