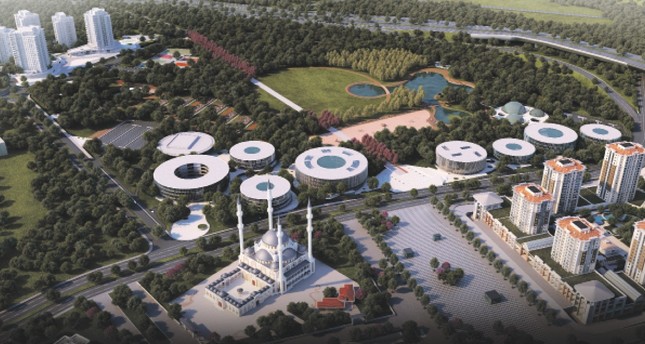 Emlak Konut REIT, Turkey's biggest real estate investment trust that has a very important land portfolio on the planned route of Kanal Istanbul, which will create a huge added value to Turkey's economy, aims to contribute to the canal's integration with its surroundings

Kanal Istanbul is among a handful of megaprojects that promise to reshape Turkey's environmental landscape. As the country continues to grow with megaprojects that are closely monitored domestically and internationally, it is moving forward with confident steps into the future.

Kanal Istanbul will be very beneficial not only to Istanbul but also to the country's economy, Kurum added.

He highlighted that Turkey's achievements in the last 15 years, both economically and in terms of steady growth, are quite fascinating. He said that according to the World Bank's "2015 Global Public-Private Partnership Report" Turkey holds 40 percent of public-private partnerships and investments in the world with seven projects worth $44.7 billion.

Kurum explained that Turkey leads the way in global megaprojects and that Istanbul is a central world city where megaprojects are predominantly realized.

Kurum said that the announcement of the final route of Kanal Istanbul has managed to awaken interest not just in Turkey but also in the world.

He suggested that synergy will arise from the connection between Kanal Istanbul and the impact created by the third airport especially in terms of maritime transport and trade.

In addition to being a domestic and national source of revenue, it will create huge added value for Turkey's economy, Kurum said.

He added that it will contribute positively to employment thanks to job opportunities during construction and after it starts operation.

"When all these things are considered, Kanal Istanbul is in an extremely important position for Istanbul, while also being very valuable in terms of managing a strategic process for our country," he added.

Kurum said it is inevitable for real estate and real estate projects in the field of interaction of megaprojects such as Kanal Istanbul to experience appreciation.

Kurum stated that while Turkey, which continues its growth with megaprojects, primarily the Kanal Istanbul, moves forward with confident steps into the future, projects in the country are closely monitored domestically and internationally.

Kanal Istanbul to change density map of the city

Kurum said with the commissioning of the North Marmara Highway access roads, which are almost complete, and a metro network to provide transportation to Kayabaşı and Istanbul New Airport from Küçükçekmece – the last stop of the Marmaray Line – the region will not have any shortage in terms of public transport.

He stressed that citizens are mainly using these areas for residential purposes at this time, but that these areas are expected to become settlements for both businesses in the next five years.

"Especially in Istanbul, where business life is limited to certain points, this density will spread in a more balanced way and provide city comfort in terms of transportation, meaning that when Kanal Istanbul is completed, Istanbul's density map will change completely in a positive way," Kurum noted.

Pointing out that they are realizing the North Side project that will guide business life in the region, Kurum said the North Side region is at the center of mega projects such as the Istanbul New Airport, Halkalı-Airport metro line, Yavuz Sultan Selim Bridge, North Marmara Highway, İkitelli City Hospital, as well as Kanal Istanbul.

Noting that Emlak Konut aims to help Kanal Istanbul integrate with its surroundings, Kurum said they will develop an exemplary urbanity understanding in the region. He added that Emlak Konut is developing projects in the Bahçekent region, Bizim Mahalle and the Ispartakule region and the North Side.

Kurum said that Emlak Konut, which developed the Bizim Mahalle project on an area of 1-million-square-meters in Küçükçekmece, designed the project in accordance with traditional Turkish architecture. He also underlined that Bizim Mahalle is a neighborhood with social and cultural facilities that people of all ages can benefit from. This includes thematic playgrounds for children, health facilities, libraries, education facilities, festival venues, sports facilities, urban museums, handicraft centers and more.

Meanwhile, the website www.sahibinden.com, one of Turkey's leading free ad and online shopping site, has recently announced that Küçükçekmece, Başakşehir, Esenyurt and Arnavutköy, which are mentioned on the proposed Kanal Istanbul route, are among Istanbul's most promising districts in terms of real estate.

The website evaluated the districts along the route through Kanal Istanbul, one of Turkey's largest projects that will change the face of Istanbul. According to a statement released by the website, Küçükçekmece, Başakşehir, Esenyurt and Arnavutköy, which are mentioned on the said project's route, have been listed among the promising districts of the city.