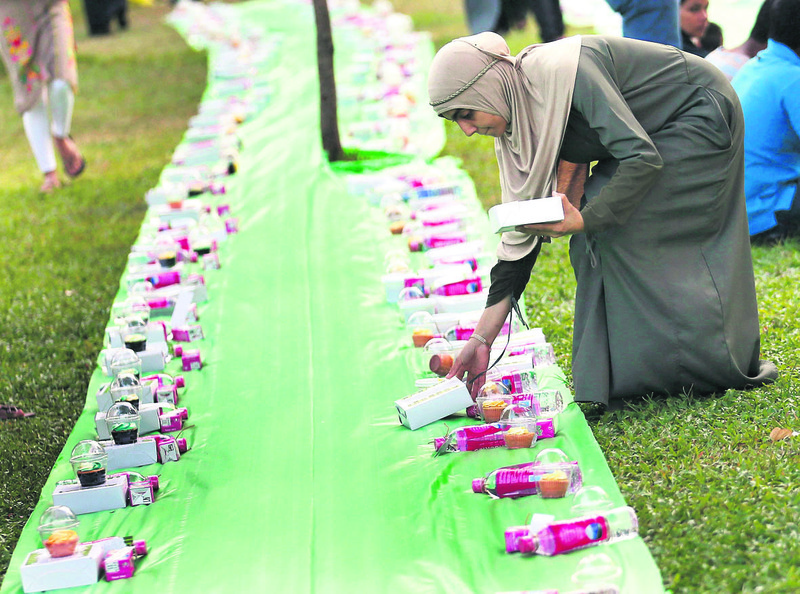 by Anadolu Agency Jul 15, 2015 12:00 am
As the sunset nears, families in the Mujabdeen Puram camp in northwestern Sri Lanka begin to slowly assemble out in the open. Under the cover of a small tent is a large centrallyplaced pot of traditional broth. Beside the pot are a few trays laden with sweets and dates. And when dusk finally falls the children will be first to rush to those pots and the trays in the communal area. Adults will follow soon afterwards, making their way from single room homes to break the fasts they've kept during the day, as part of the Islamic holy month of Ramadan.

The evening Iftar meal has become a very communal affair for the Muslim inhabitants of the camp, who were displaced in the 1990s when during a bitter civil war they were evicted from their homes by the separatist Liberation Tigers of Tamil Eelam.

But even after long years spent living in displacement, they speak little of remorse or regret and instead celebrate Ramadan as a time to share and allow their community to grow stronger.

"It is the one time when I don't feel hopeless about being an internally displaced person, driven away from my home. We are a community and we support each other. We forget our sad past as we pray together and break the fast, together," says Saudeena Nuruldeen, 39, a mother of two children who were born in the camp. Mainathul Habeeba, 54, says they share their meals "for solidarity and brotherhood. That's what has helped us survive all these years the tragedy of displacement, poverty and these harsh conditions."

With over 15,000 Muslims living in displacement camps, the largest concentration remaining in the Puttalam district, the settlement is a reminder of the island's 27-year-old war and a community who say their resettlement has been on the political backburner for three decades. "I have never known anything outside this camp. Outsiders call it 'camp' but for us it is home," says Fathum Salahuddeen, a 13-year-old girl who adds: "Iftar is my happiest time because everyone gets together."

For Fathum, the idea of breaking fasts with the community means the open gatherings in the camp but her mother, Mehurnisa, wishes she had the space to entertain her family and neighbors for large feasts.

"I cook outside and would ideally like to gather inside a living room to break the fast, with my family," says Mehurnisa, who has been displaced since 1996. "During Ramadan, this community feels closer than ever before. With each passing year, we get closer."

Unlike the rest of the year, Ramadan also sees other Sri Lankan Muslims connect to them, especially with financial donations to help them through the month. Dawood Bawa, 43, who works as a plumber, says the help they get from others during the month provides a distraction from their alienating lack of homes, Puttalam's harsh climate and the lack of water or cultivatable land. "During this period, people are especially focused on a spiritual path. They share more and look for people like us, who need support. The children are the happiest during Ramadan. On [Eid] festival day and the next day, they receive gifts and we momentarily forget our plight as displaced persons," said Bawa. Over the years, the settlement has had more permanent fixtures installed. The residents have been given new houses and many of them are connected to the power grid but still water supply is scarce, in most cases forcing them to rely on communal taps.

The issue of their resettlement remains unresolved despite a state report that recognized Muslims had been forced out of their homes by Tamil rebels in the north from as far back as 1990 and that their continued displacement is a barrier to reconciliation after the long civil war ended in 2009.

Farook Bawa, 60, a long-term displaced person from the northern town of Mannar, said the community's resilience helps them deal with their vulnerability. "That comes from Islam and we derive strength from others who support us, especially during Ramadan," says Bawa. "We are poor people. But if all the displaced get a simple livable home by next Ramadan, which has been my wish for the past 25 years, I think God has heard my prayers."
Last Update: Jul 15, 2015 8:10 pm
RELATED TOPICS