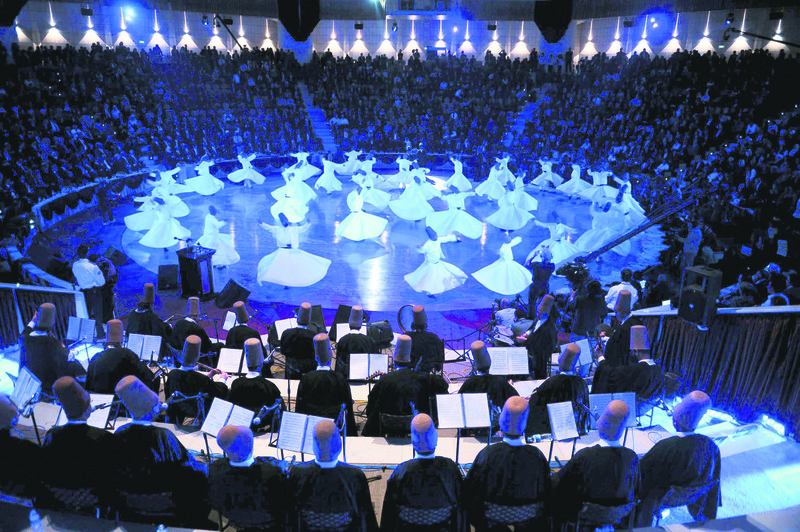 by Daily Sabah with AA Dec 08, 2015 12:00 am
The spiritual city of Konya in central Anatolia commemorates the 742nd anniversary of Rumi's passing this month with an event known as "Şeb-i Arus" (The Wedding Night), along with the participation of thousands of people attending from Turkey and abroad. Having started yesterday with the walk of "love and tolerance" and a candle-lighting ceremony, the commemorations continue with the traditional Gülbang prayer and Sema ceremonies - the performance of whirling dervishes - at the tomb of Rumi. The commemoration program covers 170 cultural and art events at 80 different points in the city, said Mustafa Çıban, the head of the Provincial Culture and Tourism Directorate, adding that around 70,000 visitors are expected to attend the events. Those interested in attending can purchase tickets on the website of the Directorate of Culture and Tourism. Similar to previous years, the events take place at the Mevlana Culture Center and Konya Municipality Sports and Congress Center. The Şeb-i Arus ceremonies include poetry, Mawlavi readings, conferences, Sufi concerts and exhibitions. At present, the hotels in Konya have reached an 85 percent occupancy rate.

Housing the tomb of Mevlana Celaleddin Rumi, an inspirational figure to not only Turks and Muslims but also many people from around the world, Konya draws many tourists during the event. The day of Dec. 17 is considered as both the death and rebirth of Rumi, as it is believed that he returned to God when he died. "The day I die is my wedding day," he said. The events are a great chance to discover the city of Konya's historic streets, mosques and museums as well. Tour companies organize trips to Konya for the Şeb-i Arus celebrations. These tours mostly focus on the spiritual aspect of the festival, and offer trips to the heart of Konya with a variety of vehicles and options. The commemoration events will continue until Dec. 17.Rumi, the 13th century Sufi poet, died on Dec. 17, 1273, in Konya. His teachings formed the basis of the Mevlevi order. In Mevlevi tradition, Sema rituals have a significant role. In 2005, the almost 800-year-old tradition of Sema was added to UNESCO's list of Intangible Heritage of Humanity.
RELATED TOPICS