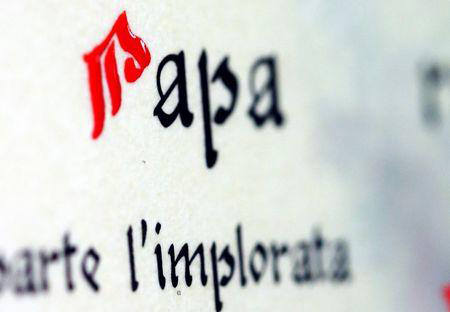 The detail of an authentic papal blessing on parchment is pictured at a workshop in Rome November 7, 2014. REUTERS
by Dec 14, 2015 12:00 am
Italian police have confiscated about 3,500 counterfeit parchments bearing blessings by Pope Francis and being sold to pilgrims in Rome, authorities said on Monday.

The bogus parchments, with elaborate lettering and pictures of the pope, were found in the printing shop of a souvenir store near the Vatican, and the proprietor was charged with producing counterfeit goods, a police statement said.

It said the parchments were printed in Italian, Spanish, Portuguese and English and had an overall value of about $77,168.

The Vatican's Apostolic Almonry, or distributor of papal charities, sells authentic parchments bearing words of blessing from the pope. The proceeds go to fund various projects to help the poor and needy of Rome.

They are adorned with elaborate gothic calligraphy and usually contain words of good wishes and a papal blessing for occasions such as births, weddings and anniversaries. Many are hand-made.

Last year, the Vatican stopped outsourcing the production of the parchments and returned to the ancient practice of making them all in-house. The Vatican said at the time that this was so all the proceeds would go directly to charities.