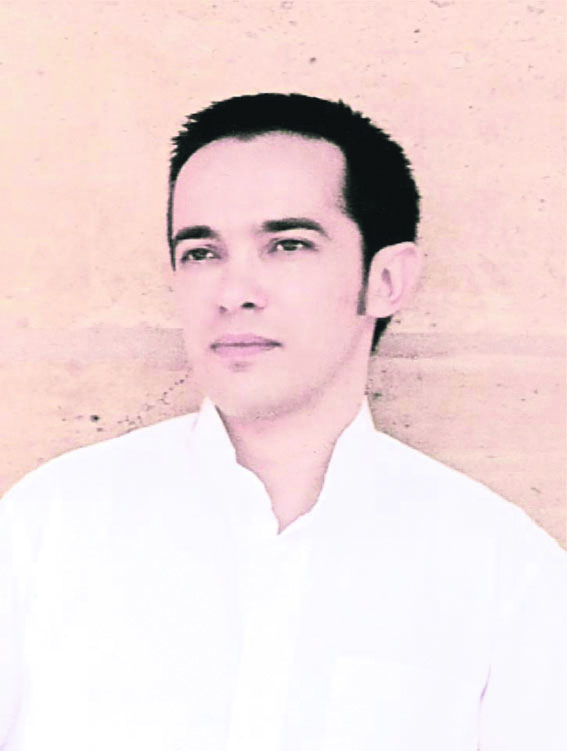 by Anadolu Agency May 02, 2016 12:00 am
Islamophilia, propagating an attitude of love for the values of Islam, could serve as an antidote to the rising tide of Islamophobia in the West, argues French composer Theophile de Wallensbourg. The French composer Theophile de Wallensbourg, also known as Ahmed Ali, told Anadolu Agency in an interview: "Through the ways I live Islam whether in private or in public, through my artistic activities, I hope to demonstrate that Islam can convey [things] more beautiful, more profound, without solely reducing Islam to its aesthetic dimension."

The pianist defines Islamophilia as "the manifestation of right speech and right conduct in accordance with Islam."

He is the first Western musician to compose a piece of music inspired by a verse from the Quran, his 2014 "Nocturnal Ascension." "I once performed in concert in a wealthy Paris suburb, and the audience was surprised to learn that I was a Muslim and that I was inspired by a Quranic text. The performance was very well received. People came to see me and told me they did not think that an Islamic inspiration could give such a result. This had never been done before, and was therefore a surprise."

"Music, like abstract language, goes much deeper than speech. What is transmitted is indiscernible. What interests me is to show that God is beautiful and loves beauty," Wallensbourg insisted. "Westerners are interested in Islamic culture, but essentially in its aesthetic dimension. All that is in the practical order or part of the very interiority of Islam is often problematic," he said. Wallensbourg encourages Muslims to enact this Islamophilia, just as they are subject to Islamophobia. A prerequisite of this approach is to model good behavior every day, and to practice acceptance or tolerance, as appropriate.

"The best way to accept Islam as a religion, like with any other, is to testify to it with elegance, discretion, and good behavior."

However, Wallensbourg regretfully notes that some French intellectuals have called for a boycott of big brands which promote Islamic fashion. "They unfortunately play the game of DAESH, which tells young people: Your leaders will prevent you from practicing Islam," he added.

As for Islamophilia, Wallensbourg says it is variously understood, "whether it is promoted by Muslims or non-Muslims. Not everyone agrees on the terms of Islamophilia, even among Muslims. Intellectuals question this term, like that of Islamophobia, for various reasons that are not always very good. But if you take the words in their etymological sense, [you see that] they are right." Wallensbourg also said Islamophilia faces many obstacles, especially in terms of media coverage that constantly focuses on the negative. "Within the media, we cannot form an objective opinion of Islam. Throughout Europe, Islam is rehashed, yet without a thorough understanding of the religion," he added. "That's why, when it comes to commenting on a news story, I always impose a redefinition of terms, for example when talking about jihad. It requires some effort, every day."

The French musician said his personal means of expression is through music.

At an interfaith retreat at a Catholic monastery in the Paris region, where every religion held a prayer in its specific tradition, he played his "Nocturnal Ascension."

After the performance, a monk said he loved it. "It made me very happy, because he recognized that Islam is perfectly universal. Moreover in the expressions of Islam, there are obvious correlations with Christian and Jewish mystics," he said.

Orthodox theological training brought Wallensbourg to Islam in 2006, through Sufi mysticism - the thinker Ibn Arabi (1165-1240), in particular. Wallensbourg's play "Agonia" (Spanish for agony), inspired by Andalusia, was a foreshadowing of his own spiritual and mystical journey.

"When I wrote 'Agonia' I was 15. Years later, I discovered Ibn Al Arabi, whose personal journey, from Andalusia in southwestern Spain to Damascus, from the West to the East, served as a model for me," he said.

Turkish music then served as a vehicular language. "When I encountered Turkish music, it opened up my perspective. Its specificity is how it straddles two continents. It transpires along that isthmus, that bridge between these two worlds," he explains. He also warns: "The West will lose its universal power, which was nevertheless extremely strong until the Renaissance. An excess of rationalization has trapped the West in a sterilizing scientism, and it has lost a lot of mystical vitality. The more we dehumanize man, the more you will have men who will seek and discover their humanity, and their mystical dimension. If Islam is attacked from all sides, maybe it is because there is something that will come out of it, more light."
RELATED TOPICS