Septuagenarian tells of life spent in service to Al-Aqsa 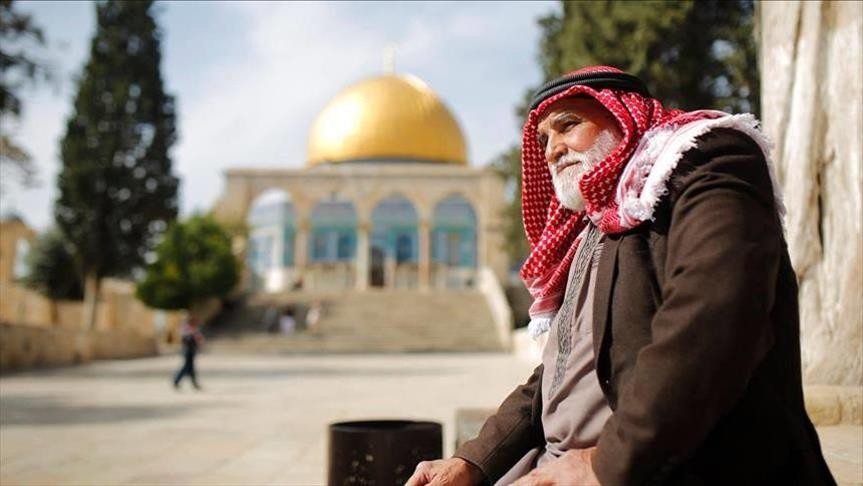 A 73-year-old Palestinian Sheikh, Khader al-Aweiwi, is the witness of the last half century history of the iconic al-Aqsa Mosque with his life devoted to defending the mosque, first as a firefighter and lately as a part-time muezzin

For the last half century, 73-year-old Sheikh Khader al-Aweiwi devoted himself to serving Jerusalem's iconic Al-Aqsa Mosque, which is seen by Muslims as the world's third holiest site after Mecca and Medina.

In an exclusive interview with Anadolu Agency, al-Aweiwi recounted the many historical events he had witnessed while working at Al-Aqsa — as a guard, a firefighter and a muezzin — from 1968 to 2011.

He first began working at the Al-Aqsa Mosque complex as a guard in 1968 — one year after Israel occupied the West Bank (including East Jerusalem), which had previously been held by neighboring Jordan.

In 1969, al-Aweiwi witnessed the infamous arson attack on the Al-Aqsa Mosque, which was carried out by an Australian Christian extremist.

The attack, which largely destroyed the mosque's 1,000-year-old minbar (pulpit), led to the establishment later the same year of the Organization of Islamic Cooperation (OIC).

"I was on vacation when the attack took place," al-Aweiwi recalls. "When I heard about what happened, I tried to reach the mosque complex despite all the barriers set up by Israel." "The people of Jerusalem (Al-Quds) were shocked and outraged," he says.

"Israeli police stopped fire-engines from reaching the area. Local Palestinians had to bring water themselves to extinguish the blaze."

Al-Alweiwi also remembers how, in the immediate wake of the incident, the Israeli authorities tried to recruit Palestinian youth to help secure the flashpoint religious site.

"They [the Israelis] offered to triple my salary if I worked as a policeman for them instead of a mosque guard," he says.

"But I rejected the offer," he tells Anadolu Agency. "I told them, 'I won't replace my badge [of the Al-Aqsa guards] with the Star of David (of the Israeli police)'."

The destructive attack inspired al-Aweiwi to begin working as a firefighter at the Al-Aqsa complex — a job he held for the next three years.

"I took numerous firefighting courses, some of which involved risky exercises that scared off the other trainees," he said.

Al-Aweiwi also describes how he saw "many Palestinians martyred over the years" in and around the Al-Aqsa compound.

"During one of Israel's massacres in the 1990s, I saw Israeli occupation troops dragging a man — who had sustained a fatal head injury — from the (Old City's) Lions' Gate," he recalls.

He also witnessed increasingly frequent incursions by militant Jewish settlers into the religious site, despite the objections of Muslim worshippers.

"Since Al-Quds was occupied in 1967, we have seen Jewish settlers force their way into the compound in ever-growing numbers," he says.

"We used to have the power to resist them," he adds. "But now they come in huge numbers, usually protected by Israeli police."

Yet despite Israel's evermore frequent escalations, al-Aweiwi says he remains "fully committed" to serving and defending the iconic mosque.

He has also served as the mosque's muezzin, responsible for broadcasting the Muslim call to prayer (adhan) five times a day.

Al-Aweiwi recalls how, one time, an Israeli officer asked him to postpone the evening call to prayer because a Jewish festival had been underway at the same time.

"I refused," al-Aweiwi says. "I told the officer unequivocally that the adhan was sacred."

Along with serving as the mosque's muezzin, al-Aweiwi also achieved prominence among local Palestinians for his melodic recitations of the Quran.

In 2010, when the Israeli navy attacked a Turkish aid flotilla bound for Gaza killing 10 Turkish activists on board, al-Aweiwi delivered a dawn sermon in which he honored the martyrs and cursed the attackers.

"I was soon summoned by Israeli intelligence officers who accused me of inciting violence," he says.

Al-Aweiwi finally retired in 2011, but this did not end his service to Al-Aqsa.

d, I asked the Awqaf (Jordan's Religious Endowments Ministry, which is responsible for overseeing Muslim and Christian holy sites in Jerusalem) to allow me to call out the adhan whenever the new muezzin is absent," he said.

His request was honored and he continues to call out the adhan on occasion, especially during the fasting month of Ramadan.

Majd al-Hadmi, who is now responsible for broadcasting the call to prayer at Al-Aqsa, describes al-Aweiwi as "more th

an just a muezzin".