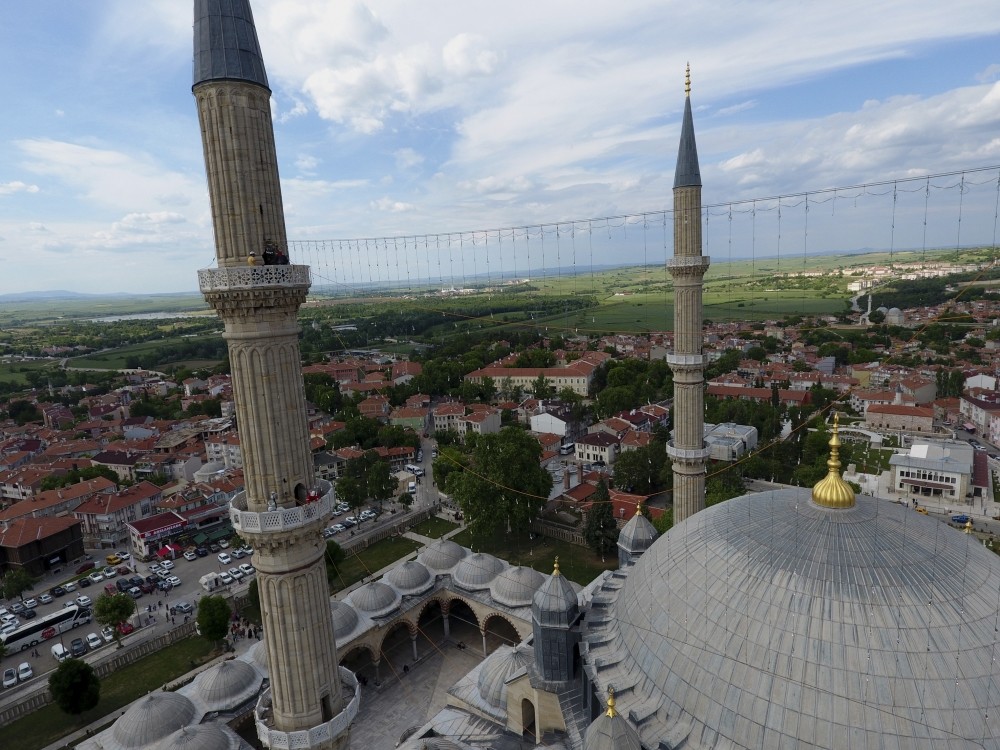 Being one of the prominent Ramadan traditions, mahya is prepared with the aim of conveying messages through wise sayings, hadiths and verses from the Quran during Ramadan. Mahya is known to have been around since the 16th century.
by Anadolu Agency May 24, 2017 12:00 am

Known as ‘the man who writes in the sky with stars,' mahya artisan Kahraman Yıldız completed his latest work in preparation for Ramadan. It will adorn the sky between two minarets with a hadith from the Prophet Muhammad: ‘Fasting is the Zakat of the body'

In preparation for Ramadan, minarets of the Selimiye Mosque in Edirne have been adorned with "mahya," an illuminated message placed between two minarets during the holy month in Islamic countries. The hadith "Fasting is the zakat of the body," was prepared by mahya artist Kahraman Yıldız. It took five hours for workers to position the mahya, which was prepared at the General Directorate of Foundations in Istanbul. It will stay between the minarets of the Selimiye Mosque for the first 15 days of Ramadan, after which it will be replaced by another with a different hadith.

Constructed Mimar Sinan (the architect) on the hill called "Kavak Square," the Selimiye Mosque can be seen from some parts of Greece close to Edirne. Edirne Regional Director of Foundations Osman Güneren spoke to Anadolu Agency (AA) and said that the General Directorate of Foundations placed mahyas in Istanbul, Edirne and Bursa, as part of the Ramadan preparations.

Elaborating on the topic, Güneren said that after a 19-year hiatus, they started to erect mahyas again three years ago, since minarets don't pose any technical problems. He added that mahyas are placed carefully by a professional team and they do not cause any harm to the minarets.

Stating that he has prepared mahyas for the Selimiye Mosque since 1975, Yıldız said that it was exhausting to place them between the minarets of the mosque as they are so high. "It takes three months to complete a mahya if you do not have any material available. If you have the material, it takes just one day," he said.

Emphasizing that mahyas were more important in the past, Yıldız noted, "In the times when cinema, television and newspapers were not yet established, mahyas were the only visual reality for society in Ramadan. Hence, they used to read mahyas while visiting mosques. The low minarets of the Eyüp Mosque in Istanbul were reconstructed to make them suitable for mahyas. A second minaret was constructed at the Üsküdar Mihrimah Sultan Mosque on public request." 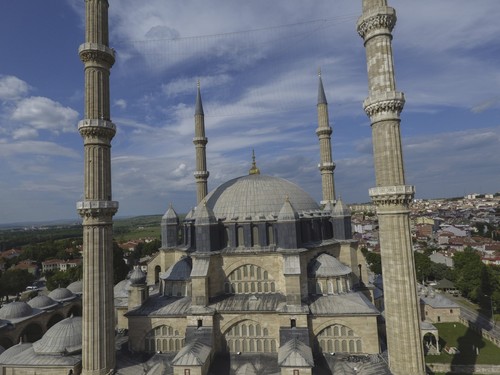 Yıldız stated that he still works as the head of the mahya group although he retired from the Istanbul Regional Directorate of Foundations after 42 years of work. "The General Directorate of Foundations hired four employees in 2013 for training as masters. However, three of them gave up their positions because of health problems. I train the last one of them now. This is a demanding craft, requiring both psychological and physiological effort. It also requires professional ethics. The exhaustion of this difficult work disappears when you watch it shining. This craft needs devotion."

Being one of the prominent Ramadan traditions, mahya is the name given to writing adorned with light. Prepared with the aim of conveying messages through wise sayings, hadith and verses from the Quran during Ramadan, mahya is known to have been around since the 16th century.

First used at the Selatin Mosques, which were commissioned by the Ottoman dynasty, the art of mahya also became a tradition in Anatolian cities. It is said that in addition to the Selimiye minarets, mahyas were placed between sticks fixed along the Meriç River in Edirne.