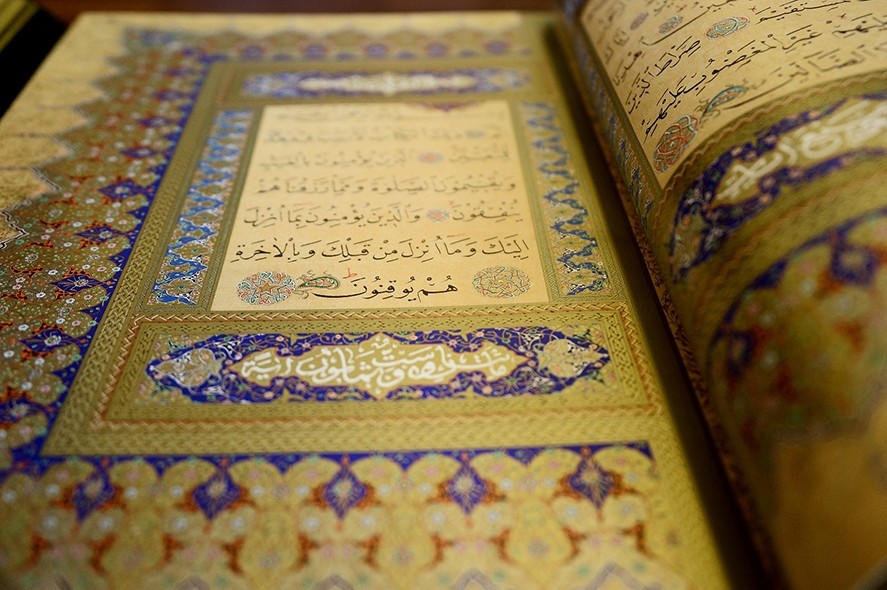 A century-old mushaf (a handwritten copy of the Quran) that was written by the calligrapher Hasan Rıza Efendi, who gave the best examples of naskh script style, has been reprinted.

Hasan Rıza Efendi, who is known for many works that he wrote with the calligraphy styles such as thuluth, jaly and taliq, gave the best examples of naskh script style using it in his manuscripts in the Ottoman era.

Following the reprint of 500-year-old work of Sheikh Hamdullah, who pushed the art of Islamic calligraphy over the top, the facsimile of the mushaf by Hasan Rıza Efendi has been carried out with the techniques that have never been tried before.

The large manuscript written by Hasan Ali Efendi, which Sultan Mehmed V. Reşad ordered to be read at his funeral after he ascended the throne and has been protected in the Topkapı Palace Museum Manuscript Library, is the second best facsimile that has been carried out to date.

The Manuscript Institution of Turkey, affiliated with the Culture and Tourism Ministry, initiated a new work in 2014 on the grounds that previous facsimiles of the mushaf did not have the necessary characteristics. In this regard, the first work became the mushaf of calligraphy master Sheikh Hamdullah.

The hexachrome and equinox printing techniques were used for the first time in Turkey. The commonly-used printing method, which was based on four primary colors, was also improved and a wider color spectrum was applied.

During the stages of preparation, graphic and assembly, not only the techniques of printing and color separation but also the selection of paper and cover were treated diligently.

Instead of heavy glossy paper that reflects colors as mate and artificial, artistic paper such as Tinteretto Stucco, Oldmild, Speciart, Enzo Vivid, Garda Pat Classic and Renoir were tested.

In the end, Tinteretto Stucco and Oldmild papers were chosen so the colors and details of the original work could be reflected.

Moreover, a line engraving was made on a goat skin, which is difficult and expensive to obtain, to give the closest feeling of the original mushaf.

After the photo shoots were done with a calibrated screen and a resolution of 300 dots per inch minimum in an environment without physical and optical defects, color separation was ensured. Trials including inside printing and cover examples were evaluated by manuscript specialists, the Book Hospital editors and leading experts such as Uğur Derman, Mehmet Özçay and İslam Seçen.