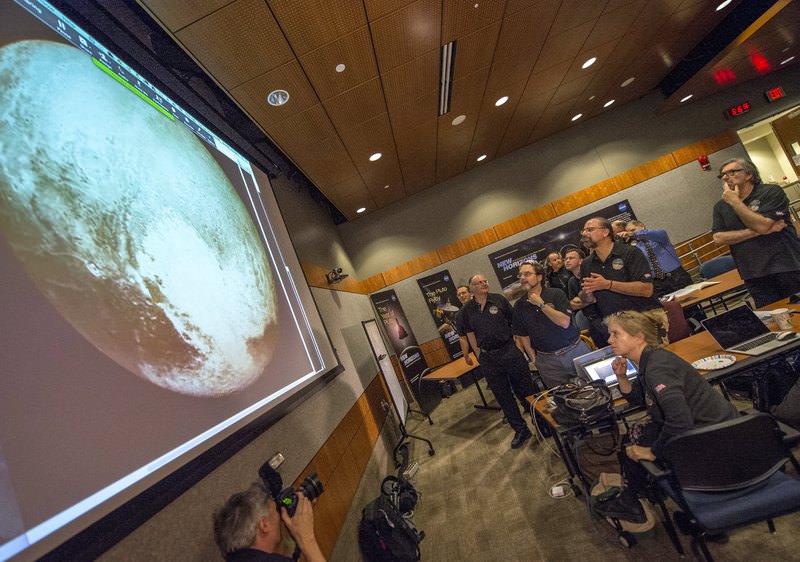 by Anadolu Agency Jul 14, 2015 12:00 am
NASA's New Horizons spacecraft reached Pluto on Tuesday after a nine-year, 4.8-billion-kilometer (3-billion-mile) trek, completing humanity's quest to visit all of the classical nine planets.

"We have completed the initial reconnaissance of the solar system, an endeavor started under President [John F.] Kennedy more than 50 years ago and continuing to today under President [Barack] Obama," the chief scientist of the New Horizon mission, Alan Stern, said in a statement amid celebrations at the Johns Hopkins Applied Physics Laboratory in Maryland, which is hosting New Horizon mission control.

The crowd included descendants of Clyde Tombaugh, the astronomer who discovered Pluto in 1930. New Horizons is carrying a small amount of Tombaugh's ashes.

"It's really historic what the U.S. has done," Stern added, "and the New Horizons team is really proud to have been able to run that anchor leg and make this accomplishment."

However, no one is sure right now of the craft's status. In preparation for the encounter, New Horizons went radio silent late last night and will not check in with mission control for several more hours. Just before 9 p.m. New Horizons is expected to beam back to Earth a trove of data that is being collected by seven instruments.

New Horizons has already added to our knowledge of far-off Pluto-it is slightly larger in diameter than initially thought and contains methane and nitrogen ices frozen at its polar region. Many more images and reams of data are expected to be released Wednesday.
Last Update: Jul 14, 2015 7:29 pm
RELATED TOPICS