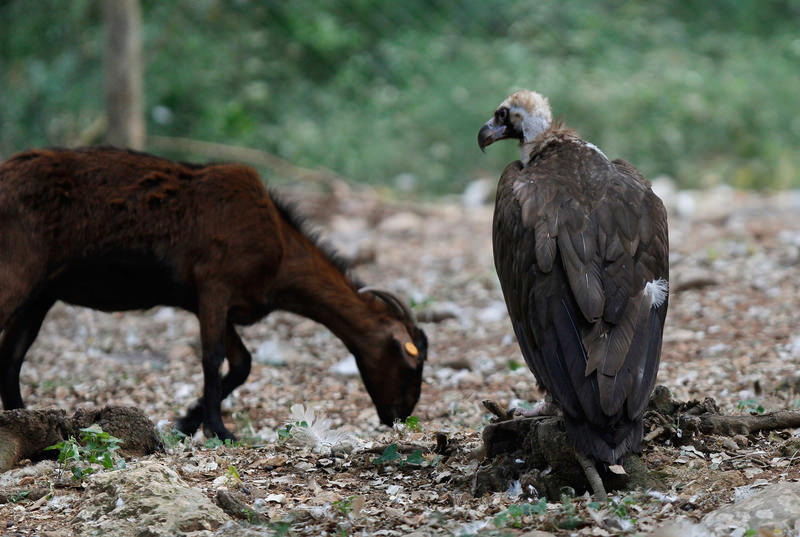 by reuters Oct 22, 2015 12:00 am
A diet of putrid rotting flesh may not be your cup of tea, but to the cinereous vulture, found across southern Europe and Asia, it is positively delightful. This tough bird, it turns out, is genetically wired to thrive on the stuff. Researchers on Tuesday said they have sequenced the genome of this big scavenger, also called the Eurasian black vulture, identifying genetic traits that account for a stalwart stomach and powerful immune system that let it carry on eating carrion.

They pinpointed genetic features related to gastric acid secretion that help explain this vulture's ability to digest carcasses and other features linked to its immune system defense against microbial and viral infections from decomposing flesh. "It is known that they are all but immune to botulism and that they can happily eat the flesh of an animal coated in Bacillus anthracis that causes anthrax," said geneticist Jong Bhak of South Korea's Ulsan National Institute of Science and Technology.

"They also are known to take infected food with rabies, hog cholera and numerous other diseases that would be lethal to most other scavengers." This vulture may have the strongest stomach in the world, Bhak said. "They have an extremely acidic stomach, enough to melt bones and perhaps metals," Bhak added. The cinereous vulture, whose scientific name is Aegypius monachus, can be found in plains, grasslands and mountainous regions from Spain to South Korea, although its numbers are dangerously low in parts of its fragmented range.

It is one of the world's largest birds of prey, with a wingspan up to 10 feet (3 meters). It is clad in dark brown feathers with a pale head and bluish beak. Its diet consists mostly of the carcasses of medium and large mammals.

The researchers compared its genome to that of the American bald eagle, and learned that the two are more closely related than previously suspected. Bhak said they share a common ancestor that lived about 18 million years ago.The cinereous vulture is a member of a group called Old World vultures found in Europe, Asia and Africa. These birds are distinct from the New World vultures like the turkey vulture found in the Americas that live similar lifestyles but are only distantly related. Bhak said the most recent common ancestor of Old World and New World vultures lived about 60 million years ago.
RELATED TOPICS