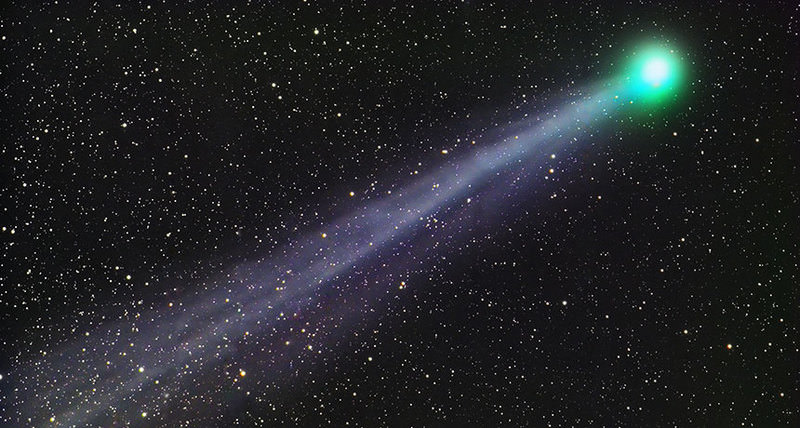 | Wikipedia Commons Photo
by French Press Agency - AFP Oct 23, 2015 12:00 am
Scientists on Friday identified two complex organic molecules, or building blocks of life, on a comet for the first time, shedding new light on the cosmic origins of planets like Earth.

The study in the journal Science Advances said that ethyl alcohol and a simple sugar known as glycolaldehyde were detected in - the aptly named - Comet Lovejoy.

"These complex organic molecules may be part of the rocky material from which planets are formed," said the study.

Other organic molecules have previously been discovered in comets, most recently in comet 67P/Churyumov-Gerasimenko, on which the European space agency's Philae found several organic molecules -- including four never detected before on a comet.

Since comets contain some of the oldest and most primitive material in the solar system, scientists regard them as time capsules, offering a peek and how it all started 4.6 billion years ago.

But while the latest study does not end the debate over whether falling comets indeed seeded Earth with the components necessary for life, it does add something to our knowledge, said study co-author Dominique Bockelée-Morvan, an astrophysicist at the French National Center for Scientific Research.

"The presence of a major complex organic molecule in comet
material is an essential step toward better understanding the conditions that prevailed at the moment when life emerged on our planet," she told AFP.

"These observations show a possible explanation for its (life's) origin on our planet," she added.

Other hypotheses exist too, including the gas from volcanic eruptions.

Comet Lovejoy is of particular interest to scientists because "it is one of the most active comets in Earth's orbital neighborhood," said the study.

The research was done using a 30-meter (yard) long telescope at the Institut de Radioastronomie Millimetrique in Sierra Nevada, Spain in January of 2015, when the comet was brightest and most productive.
Last Update: Oct 24, 2015 12:27 pm
RELATED TOPICS