Mars will be one day surrounded by rings like Saturn: report 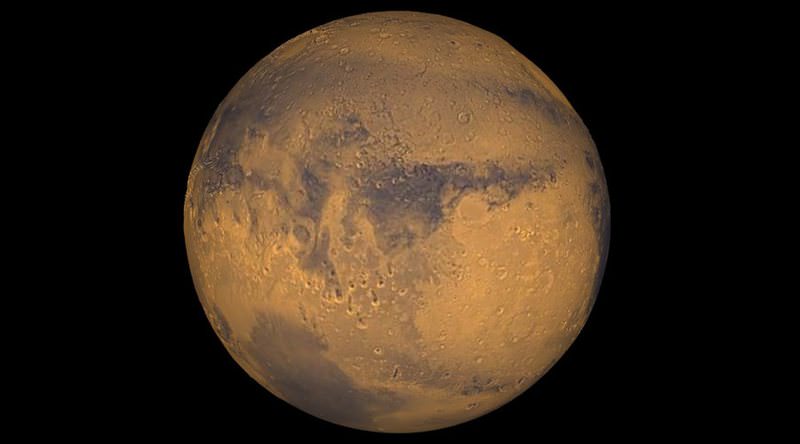 by Daily Sabah with AA Nov 24, 2015 12:00 am
Mars one day will likely be surrounded by rings similar to Saturn and assembled from a destroyed moon, according to a report released on Monday.

Mars' largest moon is slowly being pulled to the martian surface by gravity. Scientists have long believed that the falling Phobos would eventually crash into the planet. But new calculations from astronomers at the University of California, Berkeley, find that Phobos, which is comprised of weakly connected material, will instead be torn apart by Mars' gravitational pull and redistributed as a ring around the planet, like the famous rings of Saturn or Neptune.

The destruction of Phobos will occur in "20 to 40 million years" from now, according to scientist. The rings would last approximately 100 million years.

Phobos orbits just 6,000 kilometers (3,700 miles) above the surface of Mars and is known as an "inwardly migrating satellite" because it is a moon that is spiraling toward its home planet.

Saturn and Neptune are much further compared to Mars, so Phobos' gradual death provides an up-close view of how these rings are formed, which was probably a common occurrence in the young solar system. Astronomers believe Saturn was once surrounded by millions of moons, many of which now make up its rings.

"Inwardly migrating satellites ? are likely to be an under-appreciated and important component of planetary evolution," study co-authors Benjamin Black and Tushar Mittal noted in the report.

"Phobos offers the last possible glimpse of the signatures and processes that applied to inwardly migrating moons and the interplay with ring formation early in our solar system's history," they said.

The study is published in the journal Nature Geoscience.
Last Update: Nov 24, 2015 1:08 am
RELATED TOPICS