Scientists unable to solve the mystery of two-headed sharks 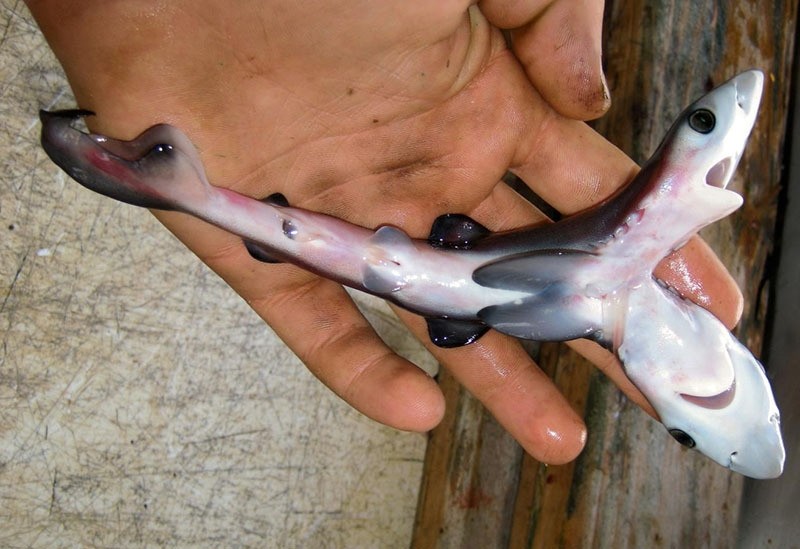 Biologists at the University of Málaga in Spain recently spotted a two-headed shark embryo during their medical research on the cardiovascular system of sharks. The embryo was discovered among 797 others and is first of its specimen, as it came from a shark that laid eggs.

According to Journal of Fish Biology, the embryo with two heads has been identified as an Atlantic sawtail catshark.

The latest issue of the journal stated that the shark embryo had a mouth, two eyes, a brain, a notochord and five gill openings on each side. The two heads merged into a single body.

The authors also wrote that the body consisted of two hearts, two oesophaguses, two stomachs, two livers, a shared intestine and one set of kidneys and reproductive organs.

The Atlantic sawtail catshark is found in a small area of the northeastern Atlantic Ocean and is considered near threatened.

So far seven other two-headed sharks have been found of different species including bull and blue sharks.

In fact, most recorded two-headed embryos come from blue sharks, as they carry up to 50 babies at a time.

The two-headed bull shark fetus found in the Gulf of Mexico in 2013 is one of the most known.

Scientists are now trying to explain the reason behind this mutation.

Genetic disorder is regarded as the most possible cause. However scientists also state that different factors such as metabolic disorders, pollution, viral infections or a shrinking gene pool due to overfishing may also lead to this kind of malformation.

The condition of having two heads is called dicephaly. It is not widespread throughout the animal world, but there are reported cases in various groups like snakes and dolphins.