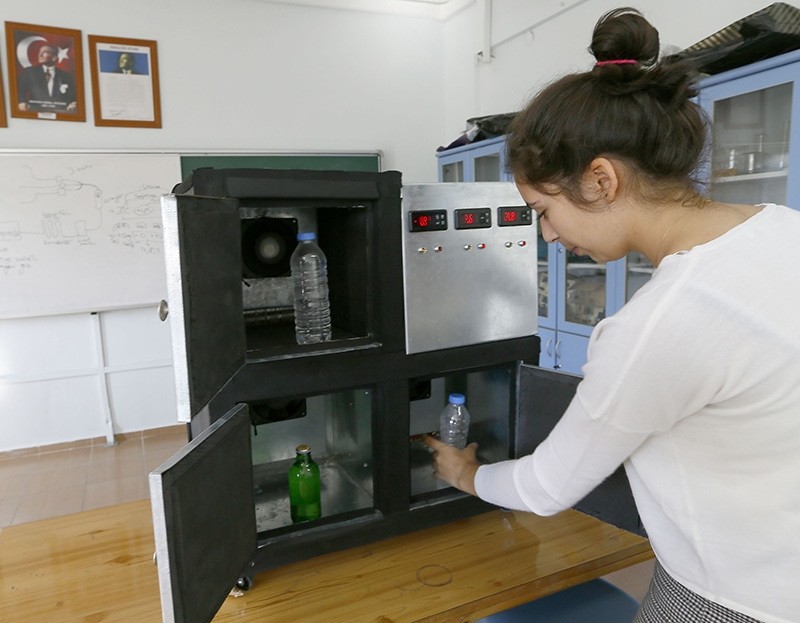 Turkish high school student Elifnaz Şentürk has been awarded with the first prize in a scientific fair organized in Brazil for the device she developed that preserves contents at constant temperature.

Daughter of a doctor, Şentürk won the world championship in the material engineering field in the Brazilian Science and Technological Fair, Mostratec, for the preserving device she developed for professional needs of her father, Turkish media outlets reported. The project competed with 400 projects in 21 countries.

Şentürk, who is currently enrolled in 11th grade, explained that since her childhood her father has been teaching her the importance of preserving materials important for human life such as blood, medicines, vaccines, serums in optimal temperatures.

Currently studying in Karşıyaka district of western Izmir province, Şentürk noted that her father sometimes had to leave home for the hospital late in the evening, after learning that there were changes in the room temperature where vaccines were safeguarded.

Şentürk said that her father was complaining about the lack of devices in the healthcare community which would be able to conserve medical materials at constant temperatures, adding that helping her father motivated her to work on such a device.

Şentürk noted that the temperature inside traditional cooling devices, which start cooling process accordingly with the indoor temperature after stopping the cooling, can show a change up to 10 degrees, negatively affecting the material stored inside.

She also said that organs used in transplants have a very precise range of temperature when being transported, and current cooling systems do not provide that function. "When an organ is lost, the patient's life enters in risk. This is also valid for vaccines, serums, medicines, blood and blood products. This situation causes financial losses too. It negatively affects the morale of healthcare personnel," Şentürk said.

Şentürk stated that she also asked help from professionals in air conditioning, as well as software programmers in the process of developing the prototype which was built in 10 months at a total cost of 4,116 Turkish liras.

The device switches automatically from cooling to heating and vice versa in order to ensure and protect the optimal level of constant temperature needed for vaccines and other material. The device is composed of 3 different compartments, each one able to be adjusted for a different temperature than the others.