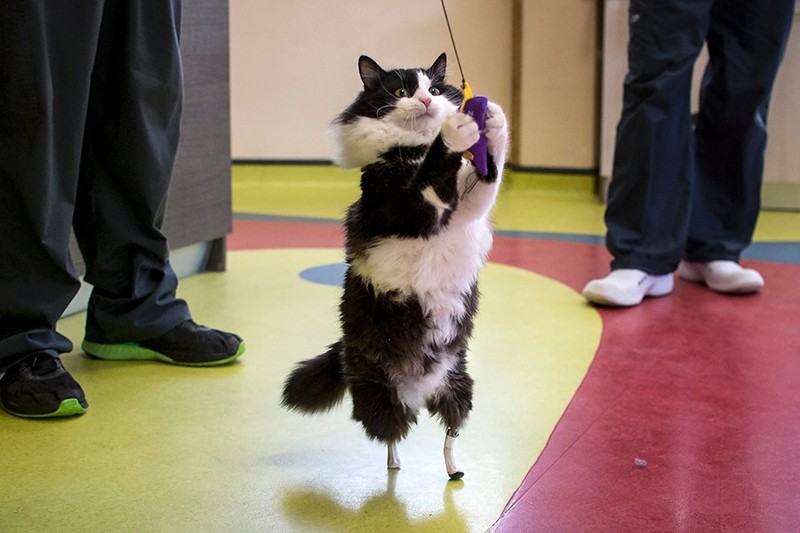 A cat named Pooh who lost his back legs in a road accident is back on a set of bionic feet after groundbreaking surgery in Bulgaria, becoming the country's first "bionic cat" with a pair of prosthetic hind legs.

The one-year-old stray was found injured in the countryside near the city of Pleven in April. Months later, surgeon Vladislav Zlatinov drilled into what was left of Pooh's limbs and fitted two blade-like implants.

Pooh can't go back to his old life, sleeping outdoors and taking scraps of food from villagers. So staff at Sofia's Central Vet Clinic are looking for a new home. There have already been several applicants.

"We're very proud," said Zlatinov as Pooh chased a toy mouse around him. "It was quite a success ... It gives hope to other patients."

Zlatinov followed the lead of veterinary surgeon Noel Fitzpatrick who fitted new hind legs on a cat called Oscar in Britain in 2009. He was aiming to give the fluffy, black-and-white cat who was probably hit by a train a chance at the sort of independence that the traditional solution — a set of wheels — would never have offered.

Zlatinov relied on a few publications in scientific journals. With no commercial implants available, the parts had to be custom-built.

At the end of the complex surgery, Pooh had a pair of titanium legs implanted into his body. They are connected to external prostheses that can be changed like shoes.

Pooh had to recover for six weeks before he could test out his new limbs. Now, he is getting used to them, Zlatinov said, adding that Pooh notices the prostheses and tries to keep them clean.

Since Pooh, Zlatinov has given a bionic paw to an eight-month-old cat called Steven. Both animals were brought to the clinic by local charity, which paid for the surgery.