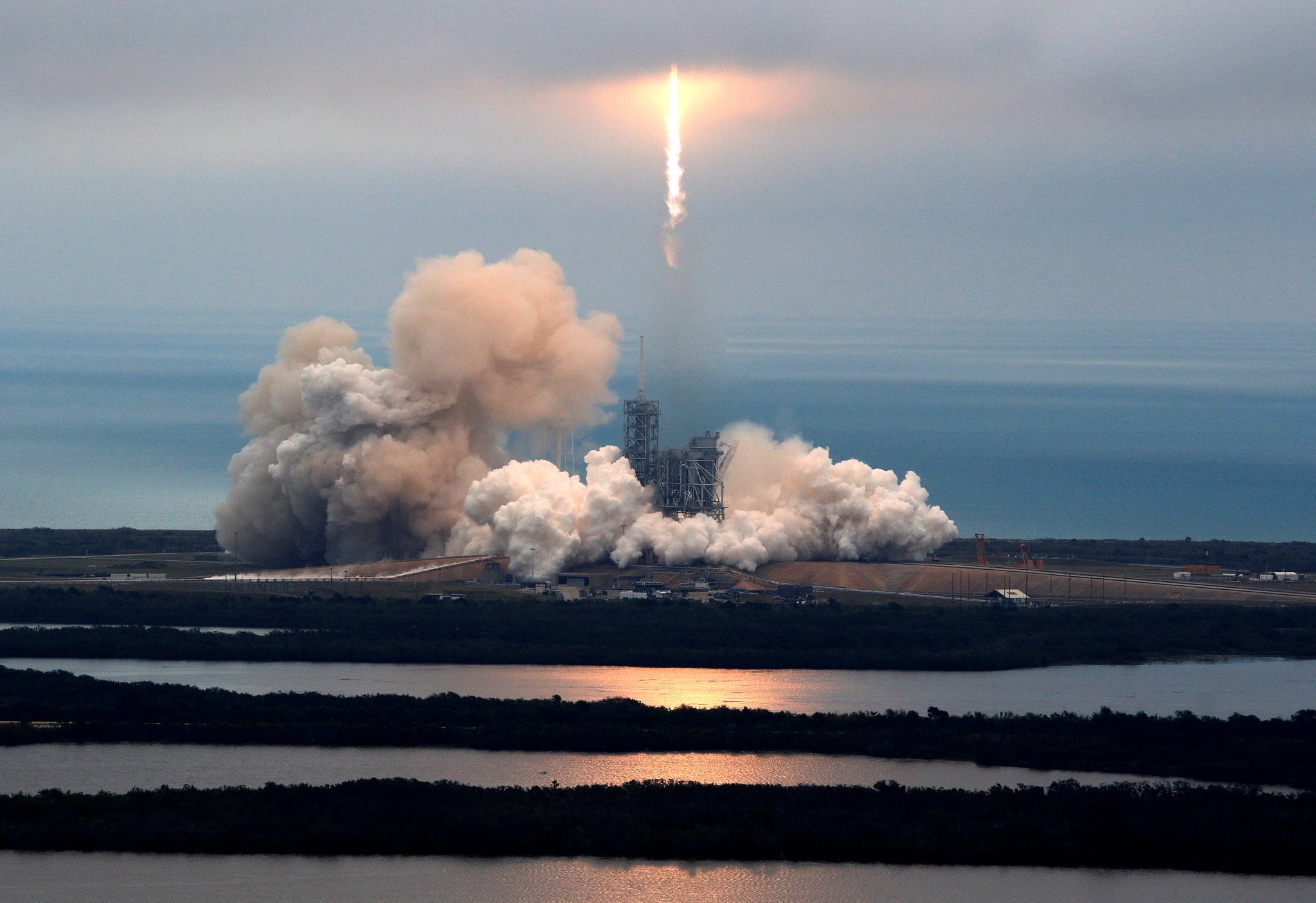 A SpaceX Falcon rocket blasted off on Sunday from a historic NASA launch pad at the Kennedy Space Center in Florida, then succeeded in landing itself back on the ground nine minutes later.

The rocket, which launched at 9:39 a.m. EST, carried a cargo ship with about 5,500 pounds (2,500 kg) of supplies and experiments for the International Space Station.

After the launch, the rocket's first stage separated, turned around and touched down on a landing pad at the nearby Cape Canaveral Air Force Station. It marked the eighth successful landing for Elon Musk's rocket company.

It was the first flight from NASA's legendary Launch Complex 39A since the shuttle program ended almost six years ago, and SpaceX's first liftoff from Florida since a rocket explosion last summer.

The crowds at Kennedy Space Center watched eagerly as the unmanned Falcon 9 rocket took flight with a cargo ship bound for the International Space Station. They got barely 10 seconds of viewing before clouds swallowed up the Falcon as it thundered skyward.

"Baby came back," he tweeted.

The celebratory roar grew when the Dragon cargo ship successfully reached orbit a few minutes later. It will reach the space station Wednesday, delivering 5,500 pounds of food, clothes and experiments.

It was SpaceX's second launch attempt in a row. Saturday's effort was foiled by last-minute rocket concerns. The repairs paid off, and even the clouds parted enough to ensure a safe flight.

Musk said he's honored to use Launch Complex 39A. The company hopes to launch astronauts from this very spot next year, bringing U.S. crew launches back to home soil after a longer-than-intended hiatus. SpaceX Mars missions, first robots then people, could follow from here.

Kennedy Space Center's director Robert Cabana, a former shuttle commander who flew four times from 39A, is thrilled to see the pad used for commercial flights like this "instead of just sitting out there and rusting away." It's a stark contrast, he noted, to the depression that followed the final shuttle mission in 2011.

It was a momentous comeback for SpaceX. The last time SpaceX had a rocket ready to fly from Florida, it blew up on a neighboring Cape Canaveral pad during prelaunch testing on Sept. 1. Although the company successfully returned to flight last month from California, the focus was on getting leased Launch Complex 39A ready for action given that the pad with the accident was left unusable.

Built in the mid-1960s for the massive Saturn V moon rockets, Launch Complex 39A has now seen 95 launches. Apollo 11's Neil Armstrong, Buzz Aldrin and Michael Collins left Earth from here on July 16, 1969, on the first moon-landing mission. The very first space shuttle pilots, John Young and Robert Crippen, soared from here on April 12, 1981. And in a grand shuttle finale, Atlantis took off from here on July 8, 2011.

Last week, the U.S. Government Accountability Office warned the commercial crew launches by SpaceX and Boeing are at risk of slipping into 2019. "The hell we won't fly before 2019," SpaceX President Gwynne Shotwell told reporters in response.

In a tweet Saturday, Musk said the company has already "retired" so much research and development risk on the crew Dragon capsule "that I feel very confident of 2018."

As for the second-stage steering issue that cropped up Saturday, SpaceX hustled to replace an engine part before Sunday morning's try. Musk said he personally called Saturday's launch off, saying he was unwilling to risk something going wrong.

SpaceX has spent tens of millions of dollars to make 39A Falcon-ready. By the time astronauts climb into a Dragon capsule for liftoff, Shotwell said, pad renovations will exceed $100 million.