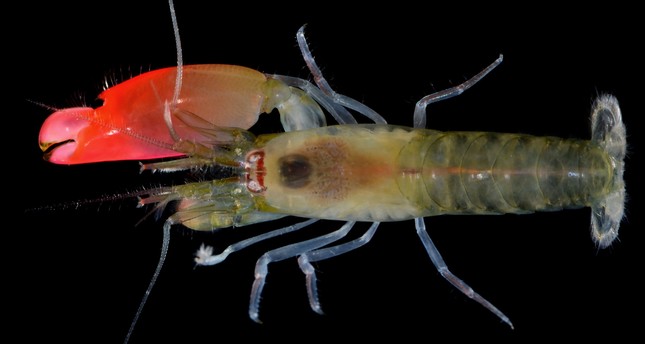 This photograph received from the Federal University of Goias on April 12, 2017, shows the newly-discovered bright pink-clawed pistol shrimp which has been named as 'Synalpheus pinkfloydi' in the scientific description of the species. (AFP Photo)

A newly discovered species of shrimp that uses a bright pink claw to create a sound loud enough to kill small fish has been named for Pink Floyd.

The shrimp found on Panama's Pacific coast has been dubbed Synalpheus pinkfloydi in the peer-reviewed journal Zootaxa. Oxford University Museum of Natural History researcher Sammy De Grave is one of three researchers credited with discovering the creature. He says the description of the shrimp was "the perfect opportunity to finally give a nod to my favorite band."

According to Oxford, pistol or snapping shrimps close their enlarged claws at a rapid speed to create an imploding bubble. The result is a sound so loud it can kill or stun a fish.

Pink Floyd is also honored in nature with a damselfly named after its 1969 album "Ummagumma."

Share on Facebook Share on Twitter
Previous in Science Fossils discovered in Tanzania in the 1930s have helped identify a... Next in Science Two moons - one of Saturn, the other of Jupiter - show evidence of...
DAILY SABAH RECOMMENDS