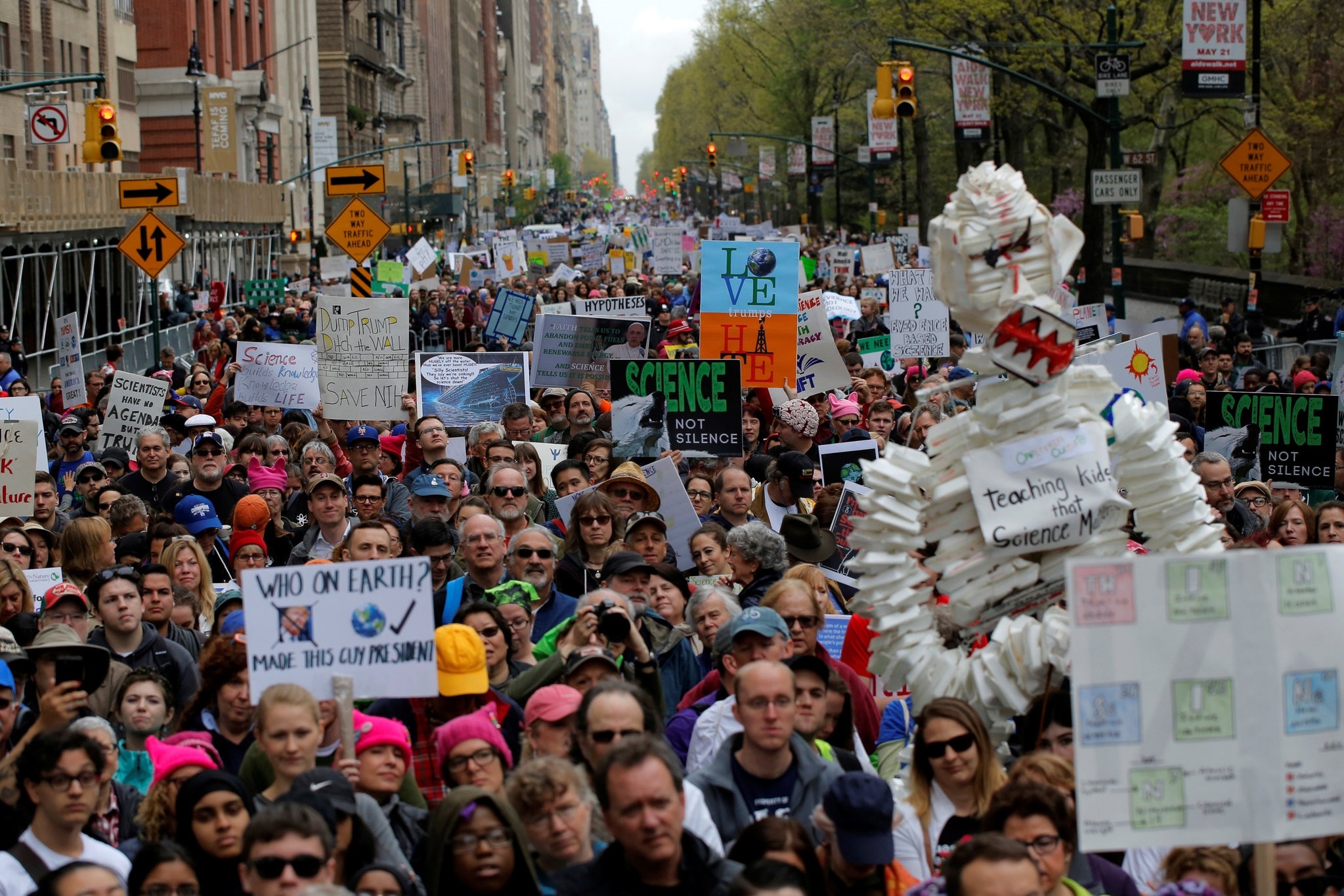 Scientists, students and research advocates rallied from the Brandenburg Gate to the Washington Monument on Earth Day, conveying a global message of scientific freedom without political interference and spending necessary to make future breakthroughs possible.

"We didn't choose to be in this battle, but it has come to the point where we have to fight because the stakes are too great," said climate scientist Michael Mann, who regularly clashes with politicians.

Standing on the National Mall with thousands soaked by rain Saturday, Mann said that like other scientists, he would rather be in his lab, the field or teaching students. But driving his advocacy are officials who deny his research that shows rising global temperatures.

In Gainesville, Florida, more than 1,000 people stretched through the city's streets.

"Most people don't know how much funding for the sciences supports them in their lives every day. Every medical breakthrough, their food, clothing, our cellphones, our computers, all that is science-based," said Pati Vitt, a plant scientist at the Chicago Botanic Garden. "So if we stop funding scientific discoveries now, in 10 years, whatever we might have had won't be, we just won't have it."

At the event in Nashville, Tennessee, where marchers shouted "science, not silence," lawyer Jatin Shah brought his sons, a 5-year-old who wants to be a dentist and 6-year-old who plans to be a doctor. Shah worries about the boys' futures if money is cut for the sciences.

People there carried signs that said "there is no planet B," ''make America think again" and "climate change is real, ask any polar bear."

Marchers in Geneva held signs that said, "Science — A Candle in the Dark" and "Science is the Answer." In Berlin, several thousand people participated in a march from one of the city's universities to the landmark Brandenburg Gate. "'We need to make more of our decisions based on facts again and less on emotions," said Meike Weltin, a doctorate student at an environmental institute near the capital.

In London, physicists, astronomers, biologists and celebrities gathered for a march past the city's most celebrated research institutions. Supporters carried signs showing images of a double helix and chemical symbols. In Spain, hundreds assembled in Madrid, Barcelona and Seville.

Organizers portrayed the march as political but not partisan, promoting the understanding of science as well as defending it from various attacks, including proposed U.S. government budget cuts under President Donald Trump, such as a 20 percent slice of the National Institute of Health.

In Washington, the sign that 9-year-old Sam Klimas held was red, handmade and personal: "Science saved my life." He had a form of brain cancer and has been healthy for eight years now. His mother, grandmother and brother traveled with him from Parkersburg, West Virginia. "I have to do everything I can to oppose the policies of this administration," said his grandmother, Susan Sharp.

The rallies set for more than 500 cities were putting scientists, who generally shy away from advocacy and whose work depends on objective experimentation, into a more public position.

Scientists said they were anxious about political and public rejection of established science such as climate change and the safety of vaccine immunizations.

"Scientists find it appalling that evidence has been crowded out by ideological assertions," said Rush Holt, a former physicist and Democratic congressman who runs the American Association for the Advancement of Science. "It is not just about Donald Trump, but there is also no question that marchers are saying 'when the shoe fits."

Judy Twigg, a public health professor at Virginia Commonwealth University, was aiming one of her signs at the president. The sign showed the periodic table of chemical elements and said: "You're out of your element Donny (Trump)." For Twigg, who was wearing a T-shirt that said "Science is not a liberal conspiracy," research is a matter of life and death on issues such as polio and child mortality.

Despite saying the march was not partisan, Holt acknowledged it was only dreamed up at the Women's March on Washington, a day after Trump's Jan. 20 inauguration.

"It's not about the current administration. The truth is we should have been marching for science 30 years ago, 20 years, 10 years ago," said co-organizer and public health researcher Caroline Weinberg. "The current (political) situation took us from kind of ignoring science to blatantly attacking it. And that seems to be galvanizing people in a way it never has before. ... It's just sort of relentless attacks on science."

"The scientific method was developed to be nonpartisan and objective," Weinberg said. "It should be embraced by both parties."