Could ‘synthetic’ embryos be the new solution for infertility? 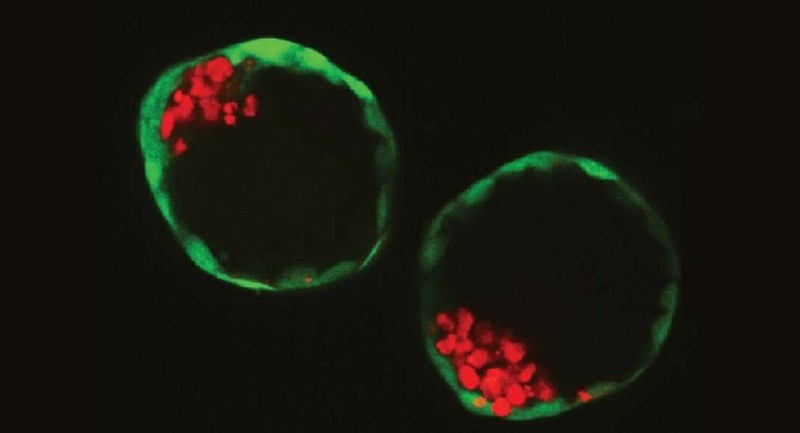 Two of the embryo-like structures grown by the scientists in the lab. (Photo courtesy of Nicolas Rivron)
by Daily Sabah May 04, 2018 12:00 am

For the first time in medical history, scientists have managed to build "synthetic" embryos without using a sperm and an egg, and implant them into living animals.

According to an article published in the journal Nature, Dutch scientists successfully used mouse stem cells, and no sperm or eggs to create the embryos.

Seen as a breakthrough in stem cell research, the synthetic embryos will help scientists understand why many pregnancies end at an early stage and improve human fertility.

As part of the study, the team of researchers from the Merlin Institute of Maastricht University mixed two types of mice stem cells for the creation of embryo-like structures, as stem cells extracted during early life can transform into many different types in the body due to their immaturity.

According to lead author Dr. Nicolas Rivron, the in-lab embryos could not be distinguished from real early embryos under the microscope.

The embryos that were placed into the womb linings of five female mice even grew for a few days, the article added.

Speaking to BBC News, Rivron said that his team would be able to create a large number of these embryos by using the stem cell technique to screen infertility drugs.

Rivron underlined that there were currently no intentions of doing the same research with human stem cells, as it would require approval.

According to Medical Daily, the research team also gave no answers regarding the possibility of using the same technique on different mammals other than mice. The process could save endangered species if it was feasible, Rivron was quoted as saying.

According to scientists, many of the pregnancies nowadays are terminated because of miscarriages that happen even before women are aware they are pregnant.

In most cases, fertilized eggs fail to stick to the womb, which has been widely linked to possible abnormalities in the growing embryo. Unfortunately, a thorough understanding of this incident still does not exist, which is why scientists claim that the use of stem cells instead of sperm and eggs could offer an opportunity to carry out more scientific research with model embryos.