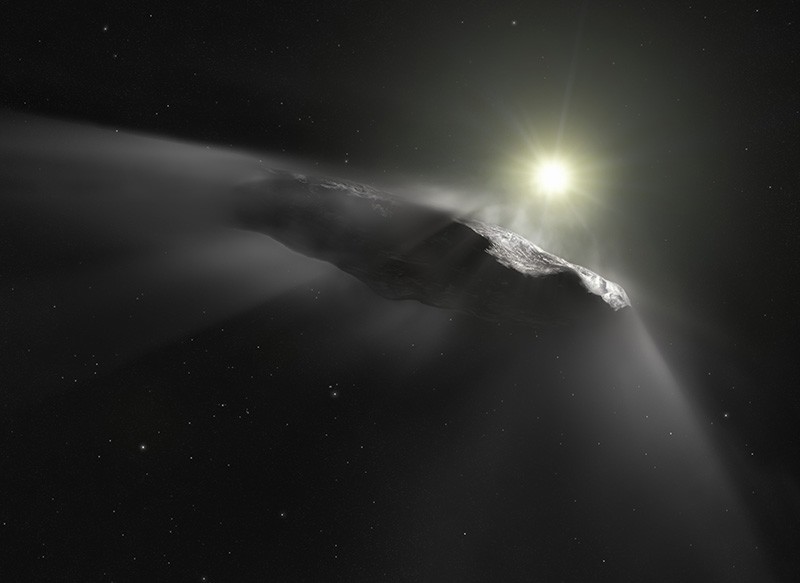 A handout photo released by the European Space Agency on June 27, 2018 shows an artist's impression of the first interstellar object discovered in the Solar System, `Oumuamua. (AFP Photo)
by daily sabah
Jul 04, 2018 12:00 am

Despite conceptions of the galaxy being empty darkness except for a few planets, stars and meteorites, interstellar space is actually full of greasy, carbon-based particles, according to a study by Turkish and Australian astronomers.

The team from Ege University (EU) and University of New South Wales in Sydney (UNSW) found that the Milky Way is permeated with 10 billion trillion tons of "space grease," a toxic, carbon-based mix of grease, soot and silicates.

The research makes important headway toward determining how much carbon – an element essential for life and the formation of stars and planets – is present in interstellar space.

EU astrophysics doctoral student Burcu Günay explained that about half of the carbon in the Milky Way exists in pure form, as simple molecules, free atoms and ions.

The other half is understood to be chemically bound in two forms: a greasy substance (aliphatic carbon) and a gaseous version of mothballs (naphthalene).

"But how much carbon is present in the dust particles in the interstellar environment is debatable because it is difficult to observe directly," Günay explained.

To determine just how much space grease exists, the Turkish-Australian team recreated the process by which the grease forms from output by carbon stars.

The team then analyzed how strongly the greasy carbon absorbed light of various wavelengths.

The lab study found there are about 100 greasy carbon atoms for every million hydrogen atoms, or half of the galaxy's available carbon.

"We have found that the dust particles between the stars make up half of the carbon present in our galaxy, in the form of oil-like molecules," Günay said.

UNSW chemist and study co-author Tim Schmidt pointed out that, "This space grease is not the kind of thing you'd want to spread on a slice of toast. It's dirty, likely toxic."

The research opens more questions as to how the sticky dust forms and what role it plays in the planetary formation and laying the foundation for life, as it travels through the interstellar medium between planetary systems.

"It is thought that after the formation of the Solar System, organic matter that feeds life, meteorites and comets may have been carried to the young planets. It is possible that these organic materials have been transported to other star and planetary systems by the matter cycle in the interstellar medium," Günay said.

The team aims to tackle the amount of mothball-type carbon next, to better understand "the great life-cycle of carbon," Schmidt said.

The findings of the study were published in Monthly Notices of the Royal Astronomical Society.