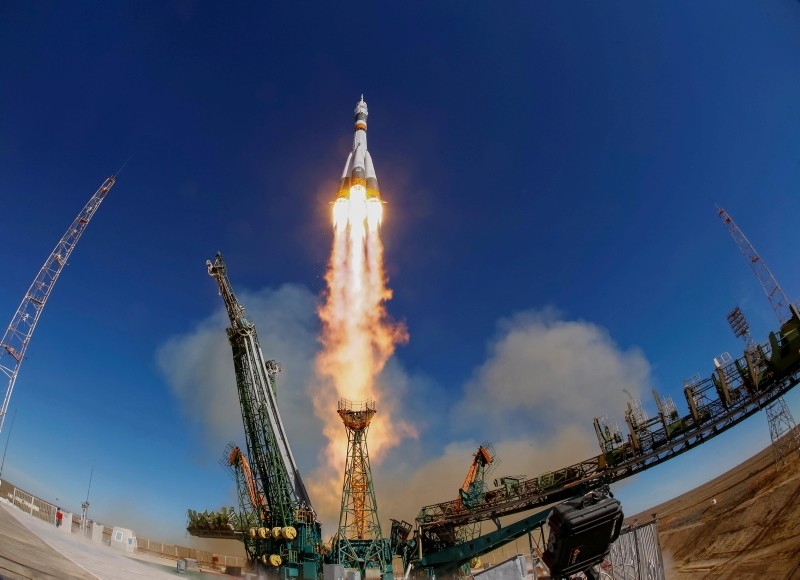 Soyuz MS-10 spacecraft carrying the crew of astronaut Nick Hague of the U.S. and cosmonaut Alexey Ovchinin of Russia blasts off to the International Space Station (ISS) from the launchpad in Kazakhstan, 11 Oct., 2018. (Reuters Photo)
by Compiled from Wire Services Nov 01, 2018 12:00 am

The launch failure last month of a manned mission to space was caused by a faulty sensor that was damaged during the Soyuz rocket's assembly at the cosmodrome in Kazakhstan, the head of a Russian commission investigating the incident said on Thursday.

Presenting the findings of an official investigation into the accident, Igor Skorobogatov told reporters that two more Soyuz rockets may have the same defect and that additional checks were being introduced into the rocket assembly process.

A Russian cosmonaut and U.S. astronaut were forced to abort their mission on Oct. 11 after a rocket bound for the International Space Station failed, sending them plunging back to Earth in an emergency landing.

The incident came as the rocket was travelling about 4,700 miles (7,500 kilometres) per hour, just 119 seconds into the voyage, according to NASA.

The rescue capsule automatically jettisoned from the booster before going into descent, landing at a sharper than normal angle and subjecting the crew to heavy gravitational force.

The duo had lifted off from the Russian-operated Baikonur Cosmodrome in Kazakhstan.

The Russian space industry has suffered a series of problems in recent years, including the loss of a number of satellites and spacecraft. Officials said they would suspend manned launches in light of the latest accident.